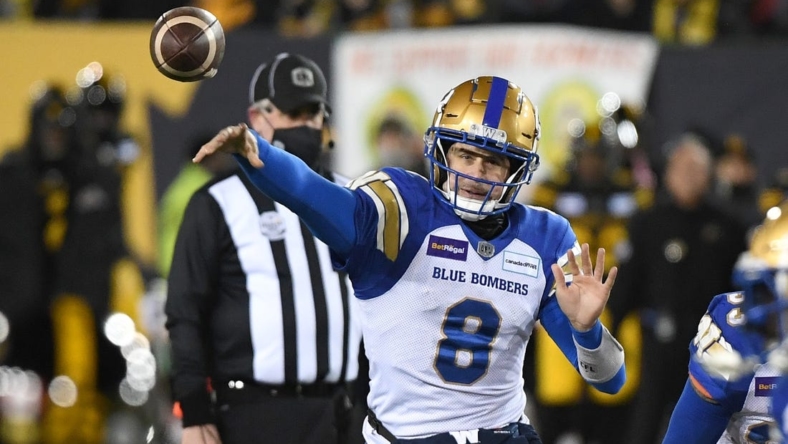 Despite an ankle injury, quarterback Zach Collaros will lead the Winnipeg Blue Bombers against the Toronto Argonauts in pursuit of a third consecutive Grey Cup championship Sunday at Regina.

Collaros, who this week was named the CFL’s Most Outstanding Player for the second straight season, practiced Friday for the first time this week in preparation for the 109th Grey Cup.

He was injured late in the West Division final against the B.C. Lions on Nov. 13.

“I thought he looked good out there,” Blue Bombers coach Mike O’Shea said.

“He’s tough as nails,” running back Brady Oliveira said. “He’s ready to go. He looked great out there (Friday) and we’re excited to have him on the field with us Sunday.”

Collaros led the league with 37 touchdown passes and led the Blue Bombers (15-3) to the league’s best regular-season record. His 4,182 passing yards were second to McLeod Bethel-Thompson (4,731), who led Toronto (11-7) to first place in the East Division.

Argonauts running back Andrew Harris, a Winnipeg native, was a major player in the Blue Bombers’ Grey Cup wins in 2019 and 2021. COVID-19 prevented a 2020 season.

Harris, 35, joined Toronto as a free agent after Winnipeg was slow to make an offer after playing for the Blue Bombers since 2016.

In his eighth game this season, he suffered a torn pectoral muscle that required surgery and appeared to end his season. Surprisingly, he returned for the East final victory over the Montreal Alouettes on Nov. 13, rushing for 42 yards and a TD on nine carries and catching one pass for 30 yards.

“I’d be lying to you if once I signed with the Argos that I didn’t have this date, the Grey Cup, circled in my mind.” Harris said.

“We know what this means to him,” Bethel-Thompson said. “So, of course, there’s a little bit of, ‘Win one for Andrew.’ We know he wasn’t happy with the way he left.”

The Argonauts and Blue Bombers have met in the Grey Cup six times since 1937, most recently in 1950, and Toronto has won each time. The Argos are seeking their first title since 2017.

Winnipeg won 23-22 at Toronto on July 4 in the only meeting between the teams this season.