The Portland Trail Blazers are now out of the NBA playoffs after Thursday’s 126-115 Game 6 loss to the Denver Nuggets, despite the extraordinary individual efforts of their superstar Damian Lillard.

It’s pretty clear Portland isn’t close to making a push for a championship, as this marks the fourth time in five years the team has bowed out in the first round of the postseason.

Thus, in order to keep Lillard, it’s vital to shake up the roster this offseason. The Blazers have especially struggled on defense, which has held them back from consistently advancing deep in the playoffs. Here are some rather drastic but necessary moves Portland should make to optimize its chances of capitalizing on Lillard’s prime.

Look, no one in Portland wants to see the dynamic duo of CJ McCollum and Damian Lillard break up. The reality is, if the Blazers are serious about winning, it must be done.

This would be a winning trade for both sides. The Milwaukee Bucks almost have a defensive surplus at this point with Khris Middleton, Giannis Antetokounmpo and Jrue Holiday. It’s almost overkill on that end of the court.

Since the Greek Freak is still not yet showing signs of developing a reliable 3-point shot, the Bucks could really use another legitimate perimeter scorer, and not force Giannis to continue trying to be something he’s not. McCollum can work off the ball, and function as an additional backcourt ball-handler to allow Giannis to operate in the post.

Meanwhile, Middleton is a versatile wing player who can really guard any position on the court except for the 5. That’s a skill set Portland desperately needs, and given that Middleton is also an excellent creator off the dribble, he can add so much versatility to the Blazers’ perimeter rotation. 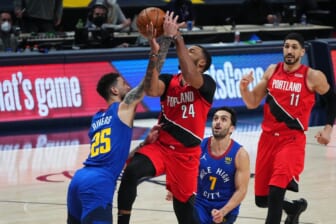 Norman Powell arrived in a deal around the NBA trade deadline from the Toronto Raptors, and it’d be an absolute shock if he accepted the player option in his contract for next season. It’s worth less than $12 million, and he may be able to make almost twice that annually on a multi-year payday.

It’s a little difficult to project how salaries would line up, because Powell’s exact value is unknown. Just to use a round, approximate number, let’s say it’s $20 million. That’s enough for the Blazers to leverage in a sign-and-trade for either another starter or sixth man.

On the other hand, Powell could be packaged with another player like Jusuf Nurkic or Robert Covington at that salary, and Portland could land itself another max player, or thereabouts. Preferably, it’d be a stout defender with some versatility.

Take a flier on Kelly Oubre Jr. in free agency

Kelly Oubre Jr. was quite disappointing in his one and potentially only season with the Golden State Warriors. Oubre admitted his lucrative contract and expectations got to him.

It’s pretty safe to say the 25-year-old probably hit his floor on offense in 2020-21. He’s only going to go up from here. Where Oubre did contribute in a bigger way was on defense, as he helped the Warriors achieve a top-five defensive rating.

The Blazers ranked 29th out of 30 teams in that statistic, which again, speaks to why they’re not built to make an NBA Finals run. Lillard expends so much energy on offense, and needs versatile defenders and shooters around him to deliver Portland a Larry O’Brien Trophy.

Off a relative down season, Oubre should be able to be had at a relative bargain on the open market, as opposed to a max contract. Whether it’s a sign-and-trade with Golden State or some other arrangement, the Blazers could do a lot worse than bringing Oubre aboard at least for a season or two.