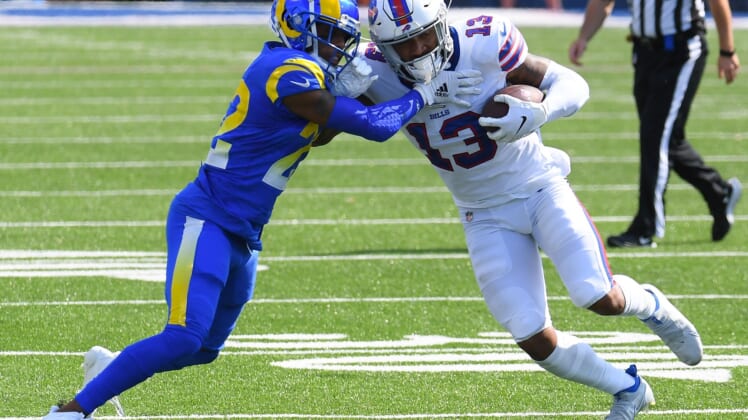 The Buffalo Bills were on the verge of blowing a 28-3 second-half lead to the Los Angeles Rams in a matchup of undefeated teams in Western New York Sunday afternoon.

Los Angeles held a 32-28 lead late in the fourth quarter with Buffalo facing a fourth-and-eight from the Rams’ 13-yard-line. That’s when Bills quarterback Josh Allen targeted young receiver Gabriel Davis with the game on the line.

What looked to be a clean play by Rams defensive back Darious Williams resulted in a pass interference penalty to set Buffalo up first-and-goal from the three.

That doesn’t seem to be a penalty in any situation. This is only magnified when taking a look at the situation at hand. Fourth and long with 25 seconds left in a one-score game. As you can see, Rams defenders were absolutely baffled by the call on the field.

Those watching the game agreed.

In no way does this take away from what Allen did. The third-year quarterback led an 11-play, 80-yard scoring drive to win the game. That included converting on a third-and-22. All said, the MVP candidate tallied 311 passing yards with five total touchdowns in the game.

If what we saw in Buffalo Sunday afternoon, both the Bills and Rams will be playing deep into January.