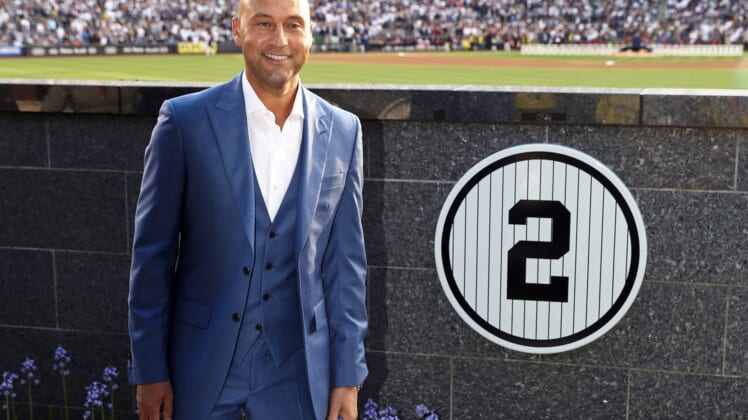 Derek Jeter Week was declared across the baseball and sports world beginning Sunday, May 7th and included several days filled with Jeter moments on the YES Network as well as Derek Jeter Night festivities. The evening included his uniform retirement ceremony as the 22nd player to have his number retired in Major League Baseball history. He also had a plaque made in his name at Monument Park with an engravement.

“Jeter is one of the most decorated players in franchise history. Having set franchise records in career hits, games played, at-bats, doubles, and stolen bases. Named 1996 A.L. Rookie of the Year. He won both the All-Star Game and World Series MVP awards in 2000. A 14-time All-Star, five-time World Champion. five-time Gold Glove Award winner, five-time Silver Slugger winner, and member of the 3,000-hit club. He was the longest-tenured captain in club history.”

Social media, of course, had a lot of fun with the dedications to The Captain. Here were some of the highlights.

Also, it can't be Derek Jeter day without acknowledgment of this picture. pic.twitter.com/dU5ZkOpnn7

Derek Jeter's dating resume is the equivalent of a 90 HR, 300 RBI season

??⚾ Next level of loyalty for Derek Jeter pic.twitter.com/2i6VKrOWtK

Almost 1-million people tuned in to listen to Jeter’s uniform retirement speech where he highlighted his two decades in Major League Baseball and as a New York Yankee.

“You know, you play here in New York for 20 years, you know I learned that time flies, memories fade, but family is forever, and I’ll be eternally grateful to be a part of the Yankee family,” Jeter said. “So I can’t thank you guys enough. Thank you very much.”