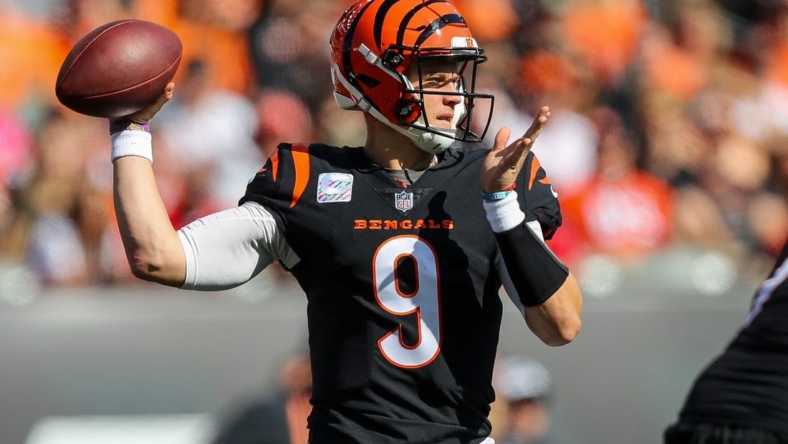 The Cincinnati Bengals and Pittsburgh Steelers have watched their seasons go in opposite directions after the Steelers won their Week 1 meeting.

The Bengals are out to avenge that loss and keep pace in the AFC North Division standings when they visit Pittsburgh on Sunday.

The Bengals went on to start 0-2 but have gone 5-2 since. They’re one game behind the Baltimore Ravens in the AFC North race with seven games to go. The Bengals, who lost to the Ravens on Oct. 8, close the regular season by hosting Baltimore.

“That’s always the goal. That’s right there for us,” Burrow said. “We are a game out of first place. We have to go and get this one and then we will take it from there.”

In their most recent game before their Week 10 bye, the Bengals trounced the Carolina Panthers 42-21. Joe Mixon scored a career-high five touchdowns, rushing for a career-best four scores and a season-high 153 yards on 22 carries and catching four passes, including a 12-yard touchdown, for 58 yards.

“We ran the ball great two weeks ago now, but that’s just one game,” Burrow said. “So we got to build on that. The coaching staff is really excited about the plan, so am I and Joe’s looking to build on that momentum from that week.”

Burrow stands at 9,834 career passing yards through 35 regular-season games and can become the fourth-fastest in NFL history to reach 10,000 if he throws for at least 166 Sunday.

The Steelers (3-6) started Mitch Trubisky at quarterback in Week 1, but amid a four-game losing streak after that season opener they moved on to first-round selection Kenny Pickett. The rookie had one of his best performances of the season in last week’s 20-10 win over the New Orleans Saints by completing 18 of 30 passes for 199 yards and rushing for 51 yards and a touchdown.

So far Pickett is completing 66.7 percent of his passes but has just two touchdowns against eight interceptions. He said that red-zone offense is one particular area where he must improve.

“We’re not where we need to be,” Pickett said, per the team website. “Obviously, there’s less grass, so it’s tighter windows, the timing, everything is faster. I’ve got to meet the guys at certain spots with the ball and they’ve got to get there on time. The game changes when you get down there. The calls change. The system changes. There are definitely things we need to get better at.”

Steelers safety Minkah Fitzpatrick did not practice Wednesday after having an appendectomy last Saturday. Coincidentally, Burrow was still recovering from an August appendectomy when he faced Pittsburgh in Week 1.

Asked if he had any advice for Fitzpatrick during his recovery, Burrow quipped, “Maybe wait just an extra week.”

Cincinnati would like to have star receiver Ja’Marr Chase back this week from a hip injury, but he did not practice Wednesday, nor did safety Dax Hill (shoulder) or defensive tackle Josh Tupou (calf). Coach Zac Taylor said Tupou won’t play this week.