News broke before the Baltimore Ravens' Divisional Round game that star cornerback Marcus Peters was fined for taunting in the Wild Card Round versus Tennessee. 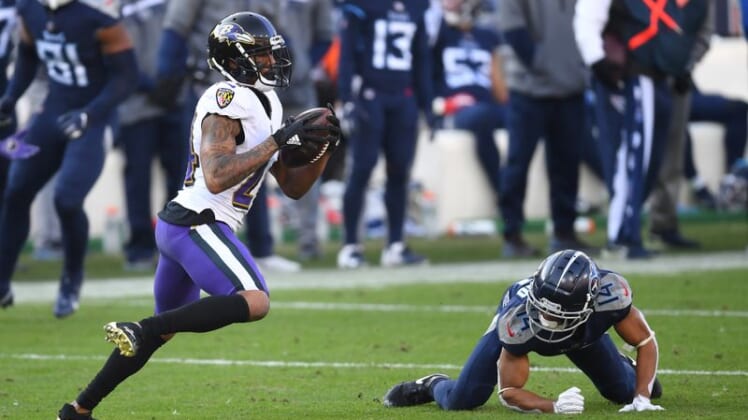 Baltimore Ravens cornerback Marcus Peters was fined $15,000 for taunting the Tennessee Titans after his game-clinching interception last Sunday, according to multiple reports.

Peters was fined for “physical actions directed at the Tennessee bench.”

After intercepting Titans quarterback Ryan Tannehill to preserve Baltimore’s 20-13 victory in the AFC wild-card round, Peters went into celebratory mode and he and more than a dozen of his teammates went to Tennessee’s midfield logo and stomped on it. Peters then placed the ball on the logo and screamed at the Titans’ bench.

According to the NFL Network, Peters was the only Baltimore player fined.

The fine is the second in recent weeks for Peters. The three-time Pro Bowl selection was docked $12,500 for unsportsmanlike conduct last month for spitting in the direction of Cleveland Browns receiver Jarvis Landry.

Landry called Peters a “coward” after learning of the incident.

The Ravens visit the Buffalo Bills on Saturday in the divisional playoffs. Peters’ last visit to Buffalo was also costly.

After Baltimore recorded a 24-17 victory in December of 2019, Peters jumped into stands and drank a fan’s beer. The NFL later fined him $14,037 for unsportsmanlike conduct.