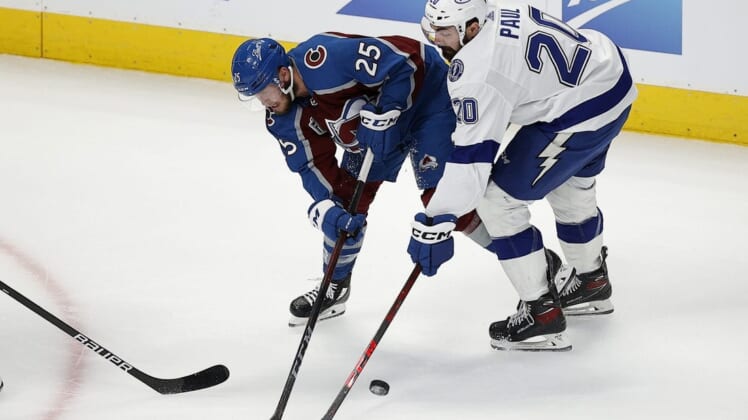 Andre Burakovsky scored 1:23 into overtime and the Colorado Avalanche beat the Tampa Bay Lighting 4-3 in Game 1 of the Stanley Cup Final on Wednesday night in Denver.

Gabriel Landeskog and Valeri Nichushkin had a goal and an assist each, Artturi Lehkonen also scored, Mikko Rantanen had two assists and Darcy Kuemper made 20 saves for the Avalanche.

Mikhail Sergachev, Nicholas Paul and Ondrej Palat scored goals and Andrei Vasilevskiy turned away 34 shots for Tampa Bay, which got forward Brayden Pont back after he missed the previous two rounds of the playoffs due to an injury.

Game 2 is Saturday night in Denver.

In overtime, a shot by Colorado’s J.T. Compher was blocked. The rebound came to Nichushkin, and he passed it through the slot to Burakovsky, who buried the puck into the open side of the net to win it. It was Burakovsky’s second goal of the postseason

Colorado got the first goal of the series 7:47 into the first period. Bowen Byram carried the puck into the Lightning zone, then passed it to Rantanen, whose shot from the left circle trickled through Vasilevskiy. Landeskog tapped it over the line for his ninth goal of the playoffs.

The Avalanche made it 2-0 less than two minutes later when Nathan MacKinnon passed to Nichushkin, whose shot from the slot beat Vasilevskiy on the short side at 9:23. It was his 10th of the postseason.

Tampa Bay got one back when Paul skated in on Kuemper and reached across the crease to slide the puck into the net at 12:26 of the opening period. The tally was Paul’s fourth of the postseason.

Sergachev and Anthony Cirelli took tripping minors 27 seconds apart to give the Avalanche a two-man advantage, and they cashed in when Lehkonen deflected Rantanen’s shot by Vasilevskiy at 17:31 of the first. Lehkonen has seven goals in the playoffs.

The Lightning stormed back in the second period with a pair of goals 48 seconds apart. Palat made it 3-2 when he tipped in a centering pass from Nikita Kucherov at 12:51, his ninth of the postseason, and Sergachev tied it on a shot from the top of the right circle at 13:39, his second of the playoffs.