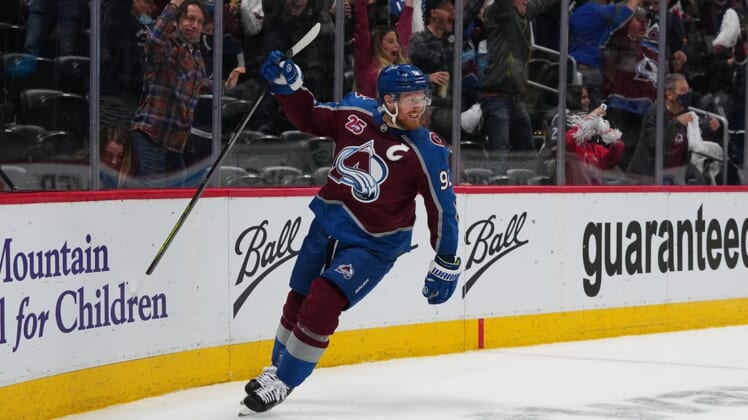 May 30, 2021; Denver, Colorado, USA; Colorado Avalanche left wing Gabriel Landeskog (92) celebrates his goal in the first period against the Vegas Golden Knights of game one in the second round of the 2021 Stanley Cup Playoffs at Ball Arena. Mandatory Credit: Ron Chenoy-USA TODAY Sports

Captain Gabriel Landeskog is committed to stay with the Colorado Avalanche through the 2028-29 season after signing an eight-year deal with the club on Tuesday.

Though the Avalanche didn’t announce financial terms of the contract, TSN reported that Landeskog will make $7 million per year.

The new pact for the 28-year-old left winger was announced minutes before the deadline for teams to give their own players eight-year contracts. The limit starting Wednesday is seven years.

Landeskog was about to become an unrestricted free agent.

The Sweden native has played all 10 of his NHL seasons in Colorado, and he has served as the captain for the past nine seasons.

Landeskog finished with 20 goals and 32 assists in 54 games last season, his eighth 20-plus-goal season and his seventh 50-plus-point season.

In 687 career regular-season games, he has 218 goals and 294 assists with a plus-50 rating. Landeskog had 16 goals and 29 assists in 49 playoff games. He won the Calder Trophy (top rookie) in 2011-12 immediately after the Avalanche selected him with the second overall pick in the 2011 draft.

The Avalanche won the Presidents’ Trophy as the top regular-season team in 2020-21, but they were ousted in the second round of the playoffs by the Vegas Golden Knights.