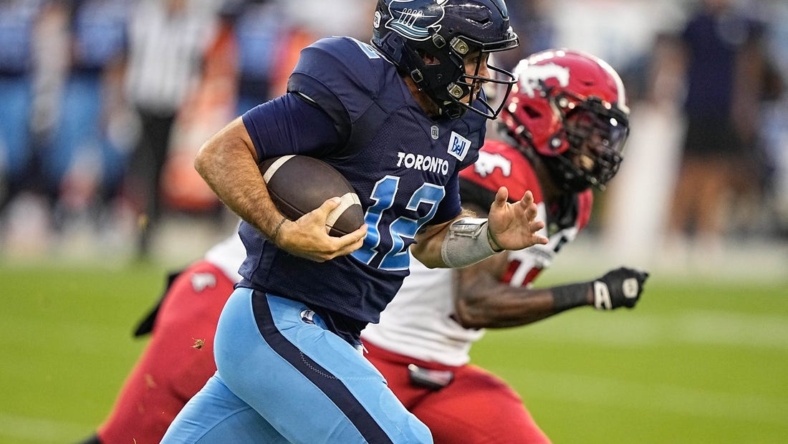 With playoff positions settled, quarterback Chad Kelly will make his first CFL start Saturday afternoon for the Toronto Argonauts against the visiting Montreal Alouettes in the final regular-season game for both teams.

The Argonauts (11-6) clinched first place in the East Division with a 24-23 victory over the Alouettes (8-9) at Montreal last Saturday. Montreal will finish in second place.

“I’m just excited to go out there and put something on film, throw the ball, hand the ball off and just keep defenses on their toes,” said Kelly, a Mississippi product and nephew of former Buffalo Bills quarterback Jim Kelly.

Chad Kelly dressed for all games this season and was 3 of 10 for 33 yards passing with two interceptions. He rushed for 102 yards and five touchdowns on 19 carries, primarily in short-yardage situations.

“He’s got a skill set,” Argonauts coach Ryan Dinwiddie said. “He can extend plays, has a strong arm. He’s adjusting to the CFL, but the kid has all the tools.”

Montreal also will use backup quarterbacks with Dominique Davis starting and rookie Davis Alexander playing the second half.

“Obviously, it’s a blessing and I’m stoked for the opportunity,” Alexander said. “I’m approaching it like any other game. The bottom line is I have to find a way to move the ball and put points on the board, no matter the moment or situation. The end goal is to win the game. If that means we’re up by 30 and I get to hand the ball off, beautiful. We won the game.”

Davis is an East Carolina product, while Alexander is from Portland State.

“I like the way (Alexander) delivers the ball,” Alouettes interim coach Danny Maciocia said. “He can throw it a mile down field, with accuracy and a little bit of zip behind it. He’s even-keeled and puts in the time.”

The third-place Hamilton Tiger-Cats (7-10) will visit Montreal for the East semifinal Nov. 6. The winner will play at Toronto in the East final Nov. 13.