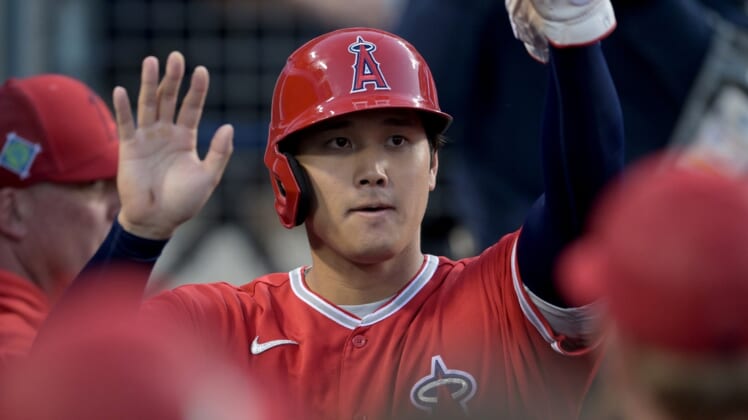 Ohtani likely will have to battle the returning Mike Trout for team MVP honors on the Los Angeles Angels while Ray’s up-and-down track record makes it hard to foresee him repeating last season’s stunning campaign. When it comes to the top rookie, it might not even be a player on the Opening Day roster.

Cleveland Guardians right-hander Shane Bieber is healthy after being limited to 16 starts last season due to a shoulder injury, and the 2020 AL Cy Young Award winner is primed to be among the best pitchers in the game. New York Yankees right-hander Gerrit Cole (16-8, 3.23 ERA in 2021) also will be at the top of the list, while the left-handed Ray (MLB-best 248 strikeouts) will pitch under heavier expectations than he has previously faced.

Toronto right-hander Jose Berrios is the top pitcher on a club many see contending for the AL pennant. The Houston Astros’ Justin Verlander, a two-time Cy Young winner, has made just one appearance since the end of the 2019 season but has deemed himself healthy after recovering from Tommy John surgery. But perhaps fellow right-hander Lance McCullers Jr. of the Astros is ready to put together a big season.

Others who could emerge include the Chicago White Sox tandem of right-handers Lucas Gioloto and Dylan Cease, right-hander Frankie Montas of the Oakland Athletics and the right-handed-pitching Ohtani if he can increase his workload while maintaining the production he provided last season over 130 1/3 innings.

Blue Jays star Vladimir Guerrero Jr. doesn’t pitch, but he was the best one-way player in the AL last season when he tied for the major league lead with 48 homers, slugged .601 (third in the majors) and had a .401 on-base percentage (also third).

Ohtani belted 46 homers and went 9-2 as a pitcher, and he again will be a top contender.

Trout played in just 36 games last season due to a calf injury, but the three-time MVP will be motivated to recapture his past form. The Boston Red Sox’s Rafael Devers (38 HRs), the New York Yankees’ Aaron Judge (39 HRs) and 2020 winner Jose Abreu of the Chicago White Sox also should be part of the race.

The Minnesota Twins seek to rebound from a poor season and have two possible candidates in newcomer Carlos Correa and holdover Byron Buxton. A move up the standings by the Detroit Tigers could make Javier Baez a candidate; the same could be said of Marcus Semien with the Texas Rangers. Budding superstar Wander Franco starts his first full season with the Tampa Bay Rays, but his time to make a run is in the future.

ROOKIE OF THE YEAR

It could be quite a race for best first-year player with a quartet of prospects predicted for stardom.

Bobby Witt Jr. of the Kansas City Royals won the third base job this spring by batting .406 with three homers, and the second overall draft pick in 2019 appears ready to make a solid impact.

Julio Rodriguez — predictably tabbed as ‘J-Rod’ — of the Seattle Mariners batted .412 with three homers in the spring is expected to add some juice to the team’s outfield.

Spencer Torkelson’s presence at first base is another reason why the Tigers are viewed as a team that could surprise, and the No. 1 overall pick in 2020 should develop into one of the biggest stars of this decade. Baltimore Orioles catcher Adley Rutschman has been viewed as a future star since being chosen No. 1 overall in 2019, but his season won’t start until later this month due to a triceps injury.

Tigers outfielder Riley Greene is also someone to watch, but he fractured his right foot last week and went on the injured list. Astros shortstop Jeremy Pena takes over for Correa and will receive plenty of at-bats. Others who could emerge are Twins right-hander Joe Ryan (starting Opening Day) and Rays right-hander Shane Baz (slated to return from elbow surgery in May).