After rare loss, Suns aim to bounce back vs. Grizzlies 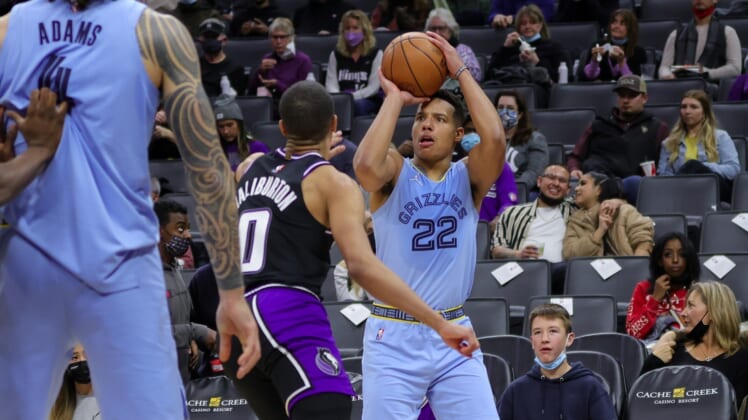 The Phoenix Suns will look to bounce back from a rare loss when they continue their four-game homestand Monday night by facing the Memphis Grizzlies.

Phoenix lost for just the third time in its past 28 games on Saturday, 116-107 to the Golden State Warriors.

The defeat snapped the Suns’ 15-game home winning streak and allowed the Warriors to move ahead of Phoenix atop the Western Conference standings.

Chris Paul had 21 points and eight assists in the loss, while leading scorer Devin Booker was held to 13 points on 5-of-19 shooting. Tied entering the fourth quarter, Phoenix was outscored 32-23.

“They played harder than us,” Suns coach Monty Williams said. “And it is rare that I would even hint at saying that about our team. I thought they outworked us more consistently for 50/50 balls, timely offensive rebounds, diving out of bounds to save it to their own teammate — they made plays like that a number of times.”

Phoenix will be without both Elfrid Payton and Jae Crowder (health and safety protocols) against Memphis, which ended a three-game losing streak with Sunday’s 127-102 win over the Sacramento Kings.

Desmond Bane made four 3-pointers and scored 28 points to lead the Grizzlies, who have lost their past three meetings against the Suns.

With both De’Anthony Melton and Dillon Brooks in the league’s health and safety protocols, Memphis needs another strong outing from Bane on Monday.

The second-year pro out of TCU is the sixth player in NBA history to make at least 200 3-pointers and shoot at least 40 percent from beyond the arc in his first 100 career games.

For Memphis, Jaren Jackson Jr. scored 21 points in Sunday’s win over Sacramento, while Brandon Clarke returned after missing the past 11 games with right-knee soreness and scored 14 points in just 15 minutes.

The Grizzlies also received a spark from John Konchar, who replaced Melton in the starting lineup and had 11 points and a career-high 14 rebounds.

Memphis is looking to avenge an ugly 119-94 loss to Phoenix on Nov. 12. The Suns never trailed in the contest and set a franchise record with 24 made 3-pointers.

With Crowder out for Monday’s rematch for the Suns, Cameron Johnson likely will replace him in the starting lineup.

Johnson has scored in double figures in 12 consecutive games for the Suns, who have lost back-to-back games only once this season — and that was in the first week.

Phoenix center Deandre Ayton had his streak of five successive double-doubles end on Saturday, but he still tallied 18 points, seven rebounds and a block in 31 minutes.

The Suns’ stellar defense is led by guard Mikal Bridges, who averages 12.3 points and 4.1 rebounds a game.

“I think he’s a first-team All-Defense guy,” Williams said. “He guards the toughest guy every night. He doesn’t take a break. He can guard 94 feet, can guard on screens, can guard on pindowns. He’s a great off-ball defender. There’s not much he can’t do on the defensive end. That’s why we feel as if he’s in so many ways the glue of our team.”