After coaching change, Colts aim for win vs. Raiders 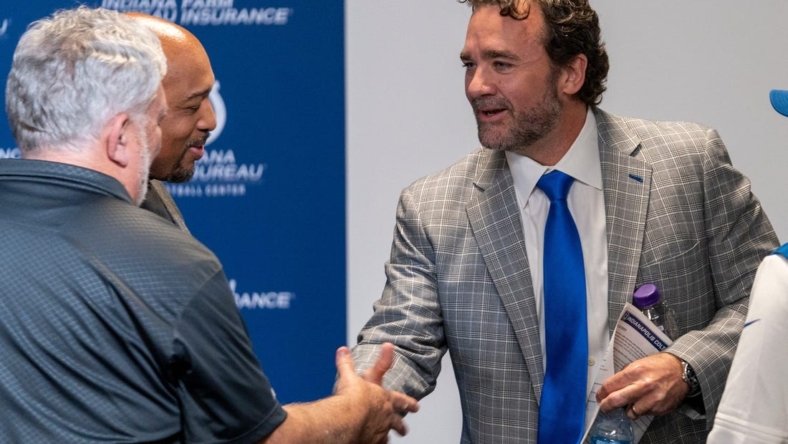 The Indianapolis Colts hope a coaching change will enable them to avoid falling out of contention in the AFC South when they visit the equally struggling Las Vegas Raiders on Sunday.

Indianapolis went 0-for-14 on third-down conversions, the second-worst mark in NFL history. The Colts also mustered just 121 yards of total offense, their lowest total since 1997.

Indianapolis was expected to contend for the AFC South Division title after it traded for four-time Pro Bowl quarterback Matt Ryan to pair with Jonathan Taylor, who led the league in rushing yards (1,811) and rushing touchdowns (18) last season.

But Ryan’s poor play and injured shoulder caused him to be benched in favor of Sam Ehlinger, who went 15-for-29 passing for 103 yards and an interception against the Patriots.

“The only thing I can control is me and that’s what I can focus on because that’s my job and it’s a big job,” Ehlinger said. “You can’t let any outside noise get in the way of that because if I do, I’m only hurting the team.”

Meantime, Taylor, who missed Sunday’s game with an injured ankle and is questionable to face the Raiders, is 21st in the league with 462 rushing yards and has scored just one touchdown in six games. He also has 16 catches for 71 yards and no scores this year after catching 40 passes for 360 yards and two touchdowns last season.

Still, the Colts are in second place in the AFC South, behind the Tennessee Titans (5-3).

This season hasn’t gone much better for the Raiders (2-6), who squandered a 17-0, second-quarter lead in a 27-20 loss at Jacksonville, marking Vegas’ second straight loss and third in its past four games.

While the Raiders have averaged 22.9 points per game, they rank in the bottom six in the league in yards allowed (371.3) and points allowed (25.1).

Derek Carr has completed 62.3 percent of his passes for 1,880 yards with 11 touchdowns and five interceptions, with his favorite target being his former teammate at Fresno State, Davante Adams.

The five-time Pro Bowler who the Raiders acquired in a trade with the Green Bay Packers is tied for first in the NFL with seven receiving touchdowns, is eighth in receiving yards (658) and ninth in catches (48).

The Raiders, who lost in the wild-card round of the playoffs last year, are in last place in the AFC West, already four games behind the first-place Chiefs (6-2).

“I definitely am not going to go in there and panic and say we need to uproot everything we’ve done. That’s not really the right thing to do,” Raiders coach Josh McDaniels said. “There’s things we’re doing very well, there’s things that we need to do better. And I think for us to try to figure out what those are and then address them and address them in the right way.