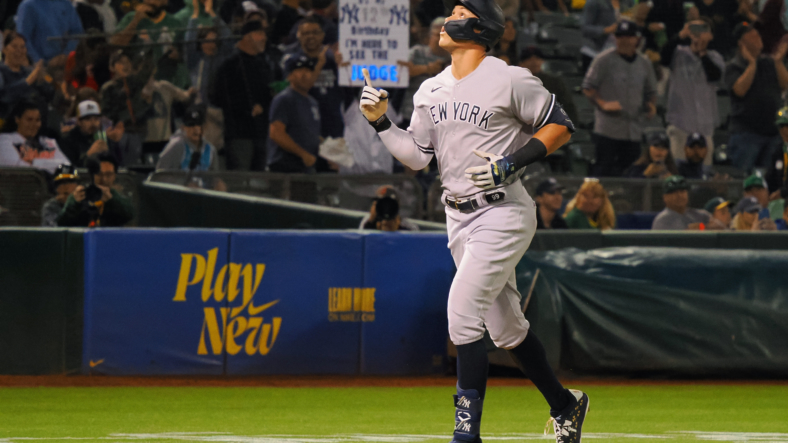 New York Yankees outfielder Aaron Judge has been on an absolute roll this season as the slugger looks to make history. Judge entered Wednesday’s action with 54 homers, tied with Alex Rodriguez for the most homers in a season by a right-handed hitter in Yankees history.

It didn’t take Judge too long to find himself alone in the record books. In the fourth inning of said game, Judge blasted a solo homer off Twins pitcher Louie Varland. The ball traveled a mere 374 feet but left his bat at 102.1 miles-per-hour.

It’s insane what Aaron Judge has done all season as he prepares for free agency. With that said, the dude has been on a completely different level recently. He’s homered in four consecutive games. Entering Wednesday’s action, the outfielder had posted a .330 average with 15 homers, 34 RBI and a .1257 OPS in his previous 34 games.

Judge has also tied Babe Ruth (1921) for the most home runs in Yankees history through the teams’ first 136 games, besting the 53 that Roger Maris put up during his record-breaking 1961 season. Maris’ 61 homers remains the American League record. But it is in dire threat of being broken by Mr. Judge. In fact, Judge is now on pace for 66 homers.

Is there a chance that Barry Bonds’ record of record of 73 homers, set in 2001, could be surpassed by Judge? That still seems unlikely. But given how the outfielder has performed recently, we certainly wouldn’t bet against it.

In any event, Judge is in the midst of one of the greatest seasons in MLB history. We’re all here to witness the greatness. And it’s just epic.