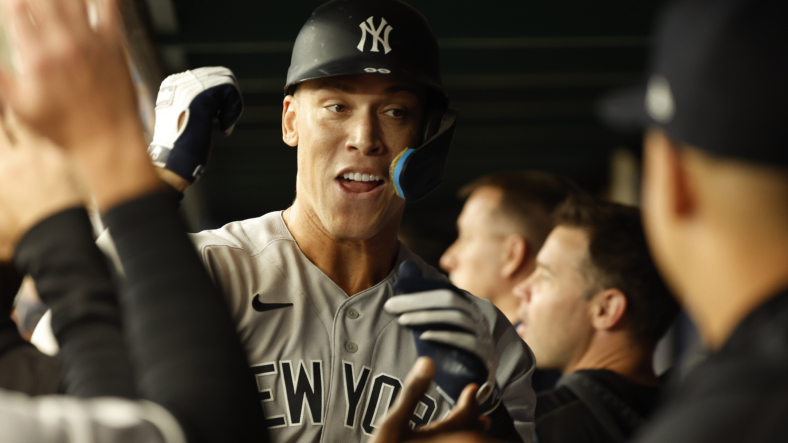 After turning down a nine-figure contract ahead of the 2022 season, Aaron Judge caused severe ramifications for the New York Yankees. Both parties settled on a one-year deal in arbitration, which guaranteed $19 million for the former American League Rookie of the Year. Yankees front office head Brian Cashman reportedly offered $213.5 million over a seven-year span — a number that would have paid him nearly $30 million per season.

There was unsettled tension regarding Judge after the dispute, which both sides agreed to keep on the field. The 30-year-old is eligible for free agency in the offseason and is certainly due for big earnings. Yes, the fan base is livid that their centerpiece was not extended, although Judge has made it clear that his preference is to remain in pinstripes. During the All-Star Game festivities, Judge noted that “it’s never been about the money. I want to play for the Yankees; I want to be here for a long time, and if it works out it works out.”

The best case scenario for Judge to receive the max contract was to remain healthy while putting up All-Star numbers. The slugger has accomplished just that and has essentially sealed a nine-figure contract regardless of where he ends up. For Cashman and Co., the priority is to re-sign their superstar at the expense of their inflated payroll.

Here are a few scenarios of how things might pan out for the likely AL MVP.

Once free agency starts, Aaron Judge will become the directive for MLB owners. Regarding the Yankees, Cashman’s objective is to use the leverage he has as an advantage over competing teams. The California native will undoubtedly accept the larger contract, however, Judge has only praised the Bombers’ ownership which could tilt the scale towards a return.

Although, there are a plethora of complications that come into play when compiling a contract for the 30-year-old. New York already owns the third-largest payroll in the league. With multiple players on the cusp of free agency, the Yankees must take every aspect into consideration before shelling out the majority of their payroll.

Vital components such as Aroldis Chapman, Jameson Taillon and Chad Green are set to hit the market in the Winter. Zack Britton, Miguel Castro and Luis Severino will join the free agent class. Although, Severino’s contract comprises a club option that the Bombers would be gumptious not to exercise. One-year rentals like Andrew Benintendi and Matt Carpenter would join the endless list of decisions for Cashman to contemplate.

There is no question that Judge takes precedence over his teammates once free agency comes to fruition. That doesn’t mitigate the value of the impending free agencies. Cashman must consider the ramifications if they were to lose out on profitable players.

Aaron Judge will cash out regardless of where he suits up

To reiterate what was previously stated, Judge has earned himself a lofty extension. The average contract for a superstar like Judge typically lasts for an extensive period of time depending on incentives and club options. Yordan Alvarez was signed to a six-year $115 million dollar contract while Jose Ramirez was granted $124 million over a five-year span.

Judge would easily slide into nine-figure rates which would vary depending on the team’s capacity. The Yankees would be first to initiate a conversation with other contending teams chiming in as well. It’s almost a given that the Yanks won’t have exclusive rights to Aaron Judge and will compete with other teams that can max out the Yankees’ budget.

In simple terms, Judge’s future in pinstripes is in jeopardy and this could be his final season in the Bronx.