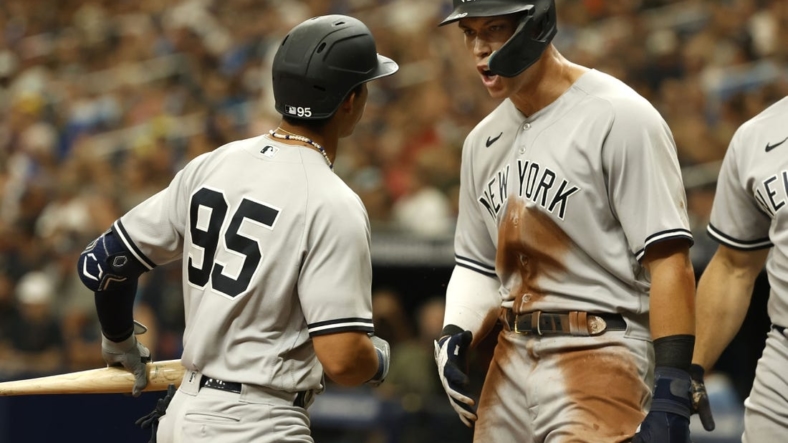 Aaron Judge hit his major league-leading 53rd homer on the second pitch of the game, but the New York Yankees could not exhale until Clay Holmes struck out Yandy Diaz with two on in the ninth inning over 3 1/2 hours later on Sunday.

The Yankees having salvaged the finale of their 10-game road trip, they hope to get rolling again while Judge will continues his pursuit of the American League home run record on Monday afternoon when they hosts the Minnesota Twins in the opener of a four-game series.

The Yankees won their final three home games of a nine-game homestand before embarking on the 4-6 road trip. After winning the first two games, New York dropped six of its final eight and saw its AL East lead reduced to four games heading into Sunday.

The Yankees avoided the lead being cut to three games when they concluded their three-game series with the Tampa Bay Rays by holding on for a 2-1 win.

Judge hit two homers in the series, putting him within eight of the AL record set by Roger Maris in 1961. He also produced five of New York’s 14 hits in the series and scored all three of its runs.

“We were focused on today,” Judge said. “We really didn’t focus on the past two days, and I think that’s what helped us go out there and get this one today.”

Minnesota lost six straight from Aug. 20-25 and then rifled off 34 runs in a five-game winning streak. The Twins then dropped three straight before Carlos Correa homered and Jose Miranda hit a two-run double in Sunday’s 5-1 win over the host Chicago White Sox.

“It was very important for us to go into New York with a positive mentality, getting that win,” Correa said. “And I think we played really clean baseball today. It was beautiful all around.”

New York will open the series with Jameson Taillon (12-4, 3.97 ERA), who withstood an injury scare Tuesday against the Los Angeles Angels when he bruised his right forearm after getting hit by Magneuris Sierra’s liner to end the second.

Taillon leads the Yankees in wins but also is 6-3 with a 5.16 ERA in his past 16 starts since taking a perfect game into the eighth inning against the Angels on June 2.

Tallion is 2-1 with a 5.23 ERA in four career starts against the Twins, who tagged him for four runs and nine hits in four innings June 7 in Minnesota.

Archer is 7-7 with a 3.03 ERA in 20 career starts against the Yankees. He earned the win against them June 8 in Minnesota when he allowed one run on two hits in five innings.