8 NBA teams that need to blow it up 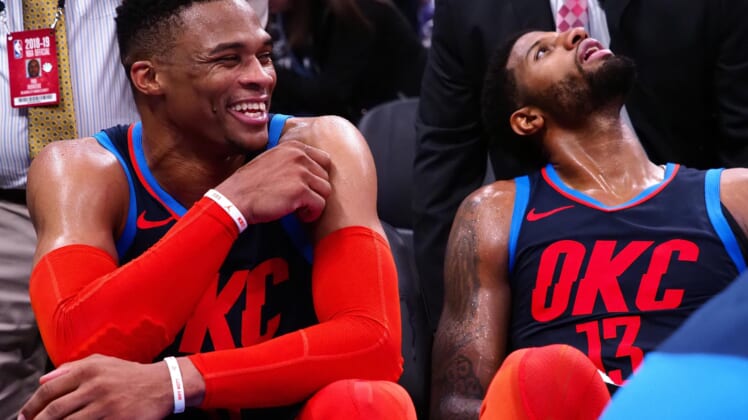 As the NBA’s final four teams battle it out for a championship, those already eliminated are looking forward to what promises to be an active summer.

After acquiring the first pick in June’s NBA Draft, what might the future hold for Anthony Davis and his Pelicans? Are the Los Angeles Lakers going to reverse course less than a calendar year after signing LeBron James?

Can the Rockets and Thunder contend with their current core groups? These are among the eight NBA teams that need to blow it up this summer.

Let’s start with the obvious. New Orleans’ relationship with disgruntled star Anthony Davis is beyond repair. He made that known after the Pelicans obtained the No. 1 overall pick in the 2019 NBA Draft. It’s now time for New Orleans to start anew with Zion Williamson. This includes getting the best possible offer for Davis — a scenario that could net New Orleans a couple young pieces and a top-five pick to go with Williamson. New Pelicans general manager David Griffin also has to think long about trading veteran guard Jrue Holiday.

There’s not a lot that an unidentified new Wizards front office can do to make up for former general manager Ernie Grunfeld’s decisions in that post. The John Wall mega contract and ensuing injury handcuffs this organization. Washington could bite the financial bullet with Wall while deciding to get what it can for fellow star guard Bradley Beal. The All-Star would net a whole lot in a trade and help Washington begin what will be a significant rebuild. Said rebuild should also include moving on from struggling head coach Scott Brooks and going younger on the bench.

There’s only one core piece that the Wolves can build around moving forward. That’s obviously Karl-Anthony Towns. Andrew Wiggins has been a complete bust after signing a max contract extension. Blowing it up in the Twin Cities would include finding someone to take on Wiggins’ contract. That could potentially include Minnesota sending its first-round pick (11th overall) to an unnamed team as a way to take on Wiggins’ contract. From there, the Wolves need to think long and hard about tanking next season to acquire a top pick in 2020 to help KAT resurrect this franchise.

Miami is stuck between a rock and a hard place. Both Hassan Whiteside and Goran Dragic have options for the 2019-20 season. The two will likely pick up said options, counting a combined $46-plus million against the cap. Of the two, Dragic might be the most tradable asset. Either way, the Heat need to think long and hard about a long-term rebuild now that the Dwyane Wade era has passed. There’s some decent young talent on this roster. But there’s no core pieces. Pat Riley knows this. Erik Spoelstra knows this.

How can a team with LeBron James even thinking about blowing up its roster? The answer to that question is rather simple. The drama and ineffectiveness we saw from the Lakers this past season is not indicative of long-term success. We’re not saying trade LeBron James. Is that even possible? Instead, change up the entire core around him. That includes moving Brandon Ingram, Kyle Kuzma and Lonzo Ball for more proven assets. Anthony Davis, maybe? It also includes sending away the No. 4 overall pick for other pieces while adding at least one max-contract free agent. Whoever runs the Lakers from here on out needs to blow it up, sans King James.

There’s a decent chance that All-Star guard Kemba Walker decides to depart in free agency. If so, that immediately puts Charlotte in a complete rebuild situation. It’s why some concluded that the Hornets should’ve have attempted to trade him back in February. Either way, a Walker departure from Charlotte would be a tough blow for this organization. If it were to happen, trading off veteran assets while building around Malik Monk and Miles Bridges would make the most sense.

The unthinkable. Just years removed from teaming Russell Westbrook up with Paul George, it might now be time for Oklahoma City to move on from one of their stars. Two consecutive early playoff exits have those within the organization feeling a bit uneasy right now. Logically, the Thunder would get more for Westbrook in a trade. It would enable them to build around Paul George while adding assets that fit better. Will this happen? We highly doubt it. But are these Thunder anywhere near title contenders with Russ and George teaming up? Nope!

Much like Oklahoma City, we’re starting to wonder whether these Rockets will ever get over the hump. They seemed to have a good chance against a Kevin Durant-less Warriors team in the conference semifinals until blowing it at home in Game 6. This seemed to destroy the morale of the Rockets’ team, James Harden and Chris Paul included. It could also lead to widespread changes. Paul would likely be the one to go if the Rockets can find someone to take on his contract. From there, future roles for P.J. Tucker, Clint Capela and Eric Gordon would have to be discussed. The status quo clearly isn’t working.