The New England Patriots have more than a few appealing sales pitches to lure Houston Texans superstar Deshaun Watson to Foxborough in a trade. 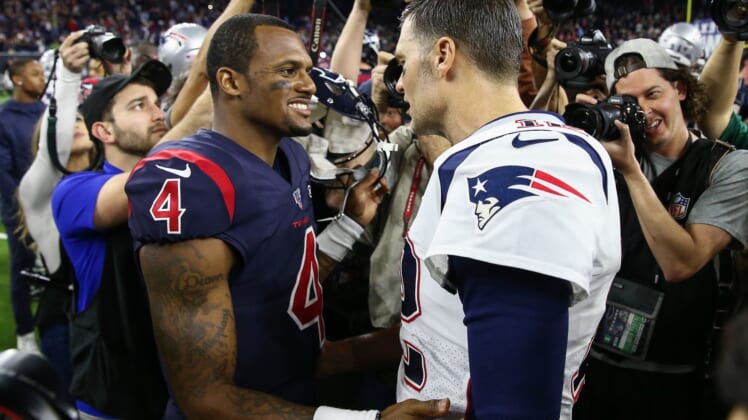 In the mist of our superb spree of in-depth Deshaun Watson trade scenario analyses, the New England Patriots stand out as a destination that really makes a lot of sense for the Houston Texans superstar quarterback.

There are a number of factors at play here: an existing relationship between the two franchises that features a lot of crossover from coaches and executives, not to mention the salary cap circumstances and how Watson’s strengths translate to what New England likes to do offensively.

The longtime New England director of pro personnel just so happened to be hired as Houston’s new general manager. Caserio is obviously well-respected, and it’s somewhat telling the Texans went back to the well of Patriots connections in hiring him.

It’s surprising Houston did so considering its tumultuous recent tenure with fired coach/de facto GM Bill O’Brien. Watson was supposed to be looped into the conversations about who to hire as the team’s new GM and head coach, but was apparently left out in the cold on the executive search and is reportedly angry as can be about it, per ESPN’s Adam Schefter.

Not a great start to the Caserio-Watson relationship, and Texans ownership already appears to have alienated the superstar. Whether there’s a possibility to repair the relationship is unclear. The fact that trade rumors are buzzing about suggests it’s not.

If there’s anyone better suited to broker a deal between a trade suitor and Houston, it’s hard to think of Caserio negotiating with New England as a more logical scenario. The fact he’s so close with Patriots boss Bill Belichick makes it absolutely ideal for the two to try to work something out. Caserio could kick-start his Texans rebuild with numerous assets from New England, and Belichick could instantly solve his quarterback problem.

With the salary cap slated to lower a ton for 2021, most teams lack the financial resources required to land Watson. There aren’t many clubs who have the luxury of tons of cap space. It’s almost as if New England had a long-term vision for its quarterback spot in the post-Brady era. Maybe Belichick is smarter than we already give him credit for.

Think about it: the 2021 draft class is loaded, and conceivably, the Patriots could trade up to land almost anyone they want outside the top two picks. If that’s not appealing, guess what? New England has a treasure chest of cash ($59 million), with more than enough to spend on a veteran upgrade. Who better than Watson to do so on?

Given how disgruntled Watson is, it’s likely he’d restructure or rework his contract in order to facilitate a trade at this point if at all possible. According to Over the Cap, a trade would only cost Houston about $5.6 million in dead money. The Texans may pull the trigger on the best offer, but again, few teams can take on Watson’s prohibitive cap cost remaining on his deal in the coming years.

Whatever assets or current players it takes, it’s an absolute no-brainer for New England to dedicate a majority of its cap in the coming years to having Watson in the fold. Having a top-five caliber quarterback is that valuable. Unlike other signal-callers who are eating up tons of cap room, Watson is well worth the value Houston paid for him.

3. Continuity for Deshaun Watson on offense

O’Brien brought over a very similar system to New England’s due to his time spent on Belichick’s staff, as he briefly was an offensive coordinator. Obviously there’s an understanding of the foundation current Pats OC Josh McDaniels built. Now, O’Brien did have to adjust the scheme to suit Watson’s best attributes, but McDaniels did that in 2020 when Cam Newton came to town.

In any conceivable instance, provided McDaniels stays put and isn’t a last-minute head coaching candidate somewhere, Watson would have the most carryover in terms of offensive terminology and schematic concepts with the Patriots than any team in the NFL. That would indubitably make his transition to a new team far easier than it would be otherwise.

Watson also brings transformational playmaking ability to the gridiron that McDaniels hasn’t really worked with before. Perhaps Newton had that type of skill set in his prime, which is now passed. It’s really set up well for Watson to come to Foxbourough and shine right away.

Due to the cap space the Pats do have, they could spend some to acquire a receiver or tight end or two to put less of a burden on Watson to carry so much of the load. You can bet Allen Robinson, for instance, would welcome the opportunity to suit up with Watson in a Patriots uniform after spending the early part of his prime catching passes from Blake Bortles in Jacksonville and Mitch Trubisky in Chicago.

Can we just be honest about this now? It’s like Belichick just haphazardly throws darts at a big board of players, and whomever the point lands closest to, he drafts and tries to fit in with the Patriots’ system.

While that’s proven effective on defense, which is Belichick’s area of expertise, he’s mightily struggled to land high-end skill position players through the draft. The latest big swing at 2019 first-round receiver N’Keal Harry looks to be the latest bust.

Even the good skill players New England picks up are mostly by accident, or come later in the draft when they’ve been passed over by every team more than once. Julian Edelman, for instance was a seventh-round pick out of Kent State who was converted from quarterback to receiver. Similarly skilled to Edelman: Prolific pass-catcher Wes Welker, a formerly undrafted, bargain bin free-agent acquisition who exploded in the Patriots’ offense.

What we learned in 2020 was that Brady was the key to New England’s system working for so long, even with subpar weapons, particularly at receiver. Brady elevated everyone’s game, and while Cam Newton did an admittedly decent job under the circumstances as a late offseason replacement under center, it was apparent how barren the Pats offense was.

Will Fuller missed 25 of 64 possible games (39%) over the past four seasons. That means, literally any given Sunday — well, almost every third Sunday on average — Watson was without his premier deep threat. He dealt with injuries to his receiving corps again in 2020, and saw elite wideout DeAndre Hopkins traded to Arizona last offseason for, um, David Johnson and a second-round pick.

That was O’Brien the GM doing his masterwork. Watson didn’t care. He still went out and balled out this season, leading the NFL in yards per attempt and passing yards, with a career-high 33 touchdowns, a career-low seven interceptions and 444 more yards rushing with three TDs.

Come on. Watson deserves better, yet it doesn’t matter. He can make do with just about anything. The 25-year-old would likely welcome the challenge of elevating the players around him in New England for the chance to go to a winning culture.

The widely held perception due to Brady’s brilliance with the Tampa Bay Buccaneers is that the QB was more valuable than the head coach in New England. This despite the fact Belichick dealt with numerous COVID-19 opt-outs, particularly on defense, and had to get Newton up to speed very quickly on perhaps the league’s most complicated offense.

It’s almost impossible for Belichick to do worse in flanking Watson with better skill players than Newton had to work with. Even with minimal upgrades, Watson will lift the Patriots’ offense to new heights in 2021 and the years to come as Belichick reconstructs the roster around his new, prized quarterback. If it comes to pass.