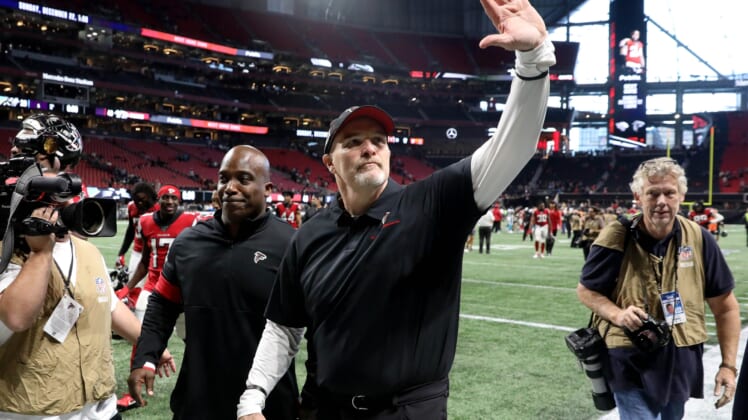 What a wild offseason it’s been around the NFL. COVID-19 has wrecked any semblance of normalcy for everyone. For some head coaches on the hot seat heading into the 2020 season, that may be amplified all the more.

We’re looking at five NFL head coaches in particular who need to find ways to cut through all the noise and figure out a winning formula. If their teams struggle in 2020, chances are it’ll cost them their jobs.

In five seasons at the helm in Atlanta, Dan Quinn’s Falcons have gone 43-37. This is a franchise that’s had elite offensive talent since he was hired. However, the defense — his specialty — has been brutally bad. How bad? In three of the five years he’s been the head coach in Atlanta, the Falcons have been a bottom-10 team defensively in terms of scoring allowed.

The big thing Quinn can hang his hat on is the Super Bowl season his Falcons had in 2016. Only, in the big game, he saw the Atlanta faithful wither as the Falcons infamously blew a 28-3 lead to the New England Patriots.

Long before he arrived in New Jersey, Jets head coach Adam Gase had a reputation as a guy who clashed with star players. Last season, that manifest in a big way as Le’Veon Bell and the coach had their issues. Now the Jets are seeing defensive superstar Jamal Adams ask for a trade out of town. It’s not a great indictment of stability at the top.

Gase’s ticket to remaining in power is the development of Sam Darnold. The good news is there were times last season when the two of them seemed to mesh well. The bad news is that the Jets have a suspect offensive line, a suspect group of receivers and that Darnold also saw ghosts last year. Things need to shape up fast or the Jets could be on a fast track down the power rankings in 2020.

As a rookie head coach in 2018, Matt Nagy saw his Bears stun the NFL world with a 12-4 record. All was well. Then, the Bears saw their already tepid offense go ice cold in 2019, with quarterback Mitchell Trubisky taking significant steps backward in his development. The Bears finished the season ranked third-worst in scoring and total offense. As a result, they finished with an 8-8 record and missed the playoffs.

Will the addition of veteran Nick Foles energize the offense in 2020? Whether he starts or kick-starts Trubisky into showing he’s a legit franchise leader, it better. If Nagy — a former quarterback turned offensive coach from the Andy Reid tree — can’t get things fired up on that side of the ball, he could be on his way out of town.

The Vikings have looked like a team with a limited championship window the past few years and have very little to show for it. Sure, Mike Zimmer has led the franchise to four winning seasons in six total years. Sure, the Vikings have made the playoffs three times. But the reality is this team has two playoff wins in six years despite a roster that appears capable of doing much more. Maybe that’s why Zimmer was so salty last season about “hot seat” talk.

Things could be even harder in 2020. Zimmer appears to have much less to work with on the defensive side of the ball. Furthermore, the team’s most dangerous offensive weapon was traded away as a discontent and replaced by a rookie. The Vikings are in a pretty tough division this coming season as well, and their schedule is not exactly easy.

Basically, don’t be surprised if John Elway doesn’t have a lot of patience this coming season if his Broncos get off to a slow start. It’s also worth noting that Denver has seemingly done an outstanding job loading up on talent. On both sides of the ball, there’s something to build around. If Fangio can’t do something with this roster, Elway will find someone who can.