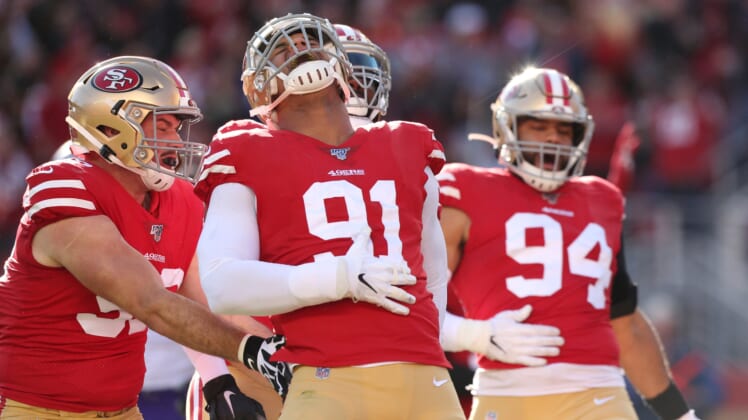 Stefon Diggs roasted Ahkello Witherspoon with a 41-yard touchdown in the first quarter of Saturday’s divisional-round game between the Minnesota Vikings and San Francisco 49ers.

Then, the 49ers benched Witherspoon in favor of Emmanuel Moseley, and from there the Vikings were helpless to do anything positive offensively in a 27-10 blowout loss.

The big picture: With Dee Ford, Kwon Alexander, Jaquiski Tartt and Jimmie Ward back in the lineup for the 49ers this postseason, San Francisco’s defense is back to looking like it did during the first half of the regular season.

The bare facts: Here’s a look at just how thoroughly the 49ers defense dominated the Vikings on Saturday.

In the process, Ford once more showed how lethal he is with his first sack since the middle of November.

Nick Bosa, clearly fresh after a week off, had two sacks, had a legit real-life Rod Tidwell moment and led the 49ers with six solo tackles.

Richard Sherman had an interception. Alexander and Fred Warner were brilliant. The 49ers were absolutely flying to the ball at all three levels.

The bottom line: Whether it’s the Green Bay Packers or Seattle Seahawks coming to Santa Clara next weekend for the NFC Championship Game, the 49ers have to be considered a huge favorite.

This is especially true in light of the way San Francisco’s defense played earlier in the season against both the Packers and Seahawks.

The 49ers earned the top seed due to their nail-biter of a win over the Seattle Seahawks in Week 17. Now healthy, this defense is only going to get better as players like Ford continue to get back into game shape.