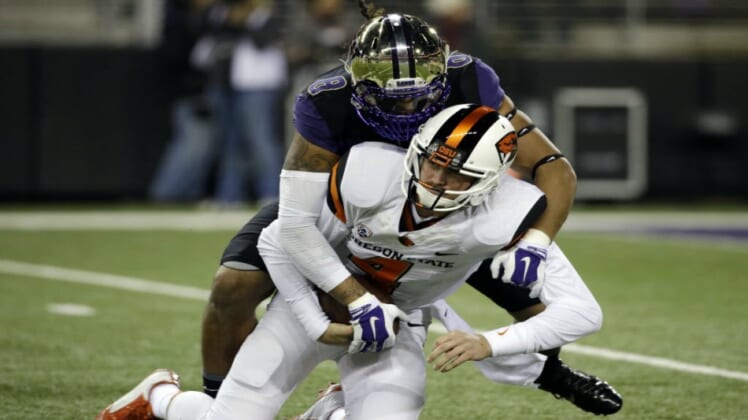 Now three practices into my Senior Bowl experience, I’ve started to gain a better perspective on which players are good, which are mediocre, and which should probably have not been invited to the game in the first place. Within each position group there are certain discrete tiers, and those tiers have been further established as I have watched each of these players practice.

Here’s the breakdown position by position for the North team – the South team will come on Friday.

Warning – these tiers are a bit variable based on the talent level of the players in question, so I’ve put my value for each tier in parentheses. Please note those when considering the tiers.

Petty is clearly a step ahead of the rest of his competition, as his arm strength and mobility will make him appealing to teams in a quarterback class that is lacking talent. He may be able to ride a solid interview process into a late Day 2 job, potentially with the Denver Broncos or St. Louis Rams. Mannion and Carden are backup-caliber players, with Carden getting a slightly higher grade based on ability to embrace Bruce Gradkowski-type backup role. His mobility has been great this week.

Cobb brings something different to the table compared to the other backs here, and his physicality has been impressive all Senior Bowl long. The Saints made a beeline to speak with him after the most recent practice. Langford is not quite as far removed from Abdullah as some think, especially given his ability as a receiver out of the backfield that he flashed today. Abdullah struggled in pass protection and has looked a bit slower than expected. Varga, as noted by Emory Hunt of Football Gameplan, is being misused at this game as a fullback, but should he end up running a 4.5 40 at 227 pounds he will be picked here. His ability is evident every time he touches the ball.

Hardy has separated himself from a fairly loaded pack due to his ability to subtly get open and his versatility. He reminds me of Donald Driver, the ex Green Bay Packer, and should have a lengthy NFL career.Montgomery had a bad first day but also made a beautiful diving catch on Doran Grant during the Wednesday practice. He is determined to improve and showed better technique and route running on Wednesday. Lippett and Smith have both had some drops but they also possess tantalizing ability to make big plays. The Tier 3 guys all are on and off, but should have roles at the next level. Goodley was an extremely engaging interview – he’s going to light up whichever locker room he joins.

They’re all big, athletic, and showed some nice seam ability but inconsistent hands. All of these guys could be fringe starter tight ends in a pinch, but should definitely at least fulfill Garrett Graham type roles as secondary options. Pierce and Boyle seem to be exceptionally fluid, while Koyack is a slightly stronger blocker than his peers.

Clemmings has struggled at times this week with his footwork and missing on his initial punches, but he still has the ability to be a top-notch lineman. His technique is something that can be worked on by his future coach, and he is certainly worth the investment at the end of the first round. Laken Tomlinson has struggled with Danny Shelton at times, but otherwise he has held his own. He is extremely intelligent and should interview very well with teams. Havenstein is a prototype right tackle at the next level and has impressed in practice. Marpet has played all three positions on the line this week and scouts seem to love his upside – he’s a late riser that really gets at defenders in the run game. The two undrafted types cannot handle any type of speed off the edge, hence their grades.

Tier 1 (Round 2 – for the time being): Danny Shelton/Carl Davis

The two guys I need to watch a bit more tape on from this week are Davis and Shelton. Davis has been the most dominant defensive lineman in one-on-ones and has shown punch, burst, and moves that he did not exhibit at Iowa. Shelton is going to be picked in Round 1 per everyone in Mobile and has flashed explosion that is rare for a man his size, but has also been shut down routinely by double teams in more organized drills and has shown some issues with snap getoff and maintaining leverage. Both deserve a second set of eyes, though, and post-Mobile I will make an effort to revisit them. Za’Darius Smith has shown great burst off the edge and plays with great fire, while Barnes and Anderson are also potential contributors. The Tier 3 guys have just been on the ground too much this week.

Kikaha is better than I gave him credit for originally as an edge player – his hand usage and explosion are evident in every snap, and he seems to be getting better each practice. Most telling, Kikaha came onto the field to work on his drops into coverage and rip moves 30 minutes after the North Practice ended – he was the only player to do so. Kikaha clearly is dedicated to his craft as an edge player, and his attitude should help to mitigate some of the other concerns that seem to be floating about him. Orchard is one of the most charismatic guys on the team and he shows good burst consistently, but he has been inconsistent in terms of his hand usage all week. Pullard is rangy, hits hard, and is undervalued by many at this point in time. Hodges has disappointed all week – he has a ways to go if he’s going to be an NFL contributor down the road.

The Quinten Rollins hype train is real, and it is spectacular – although, it should be noted that I, like Mike Mayock, would prefer Rollins to kick to safety rather than stay at cornerback. Rollins’ ball skills are world class and he has awesome footwork coming in and out of breaks. If he continues along this developmental curve, he could be an absolute stud in a year or so. Rowe is a great press defender with vines for arms and fairly good feet. The coaches kicked him to safety, although in my opinion he could play either secondary position. Nelson and Diggs impressed as slot options and consistently stayed in the hip pockets of their receivers. Shaw was beaten deep by Devin Smith for a long gain but still has upside to spare – he should probably end up going on Day 2. Drummond hits hard but his lack of range has been exposed this week.

North Top 5 Players (Based Just On This Week of Practice)

North Top 5 Players (Based On My Grades):