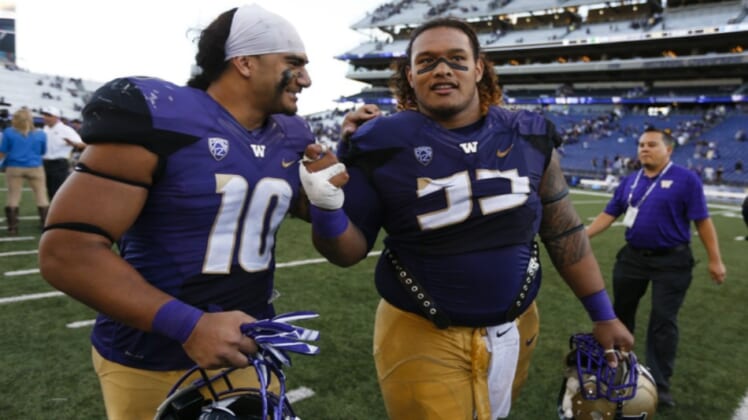 The football world descends on the small city of Mobile, Alabama this week for the Senior Bowl. It’s the annual event that features the most talented pigskin-playing college grads in the country as they go head-to-head and compete. I have been privileged enough to get a press credential for this year’s edition, and will be reporting live from Mobile throughout the week.

Practices have yet to begin, but there are still several tidbits and vibes percolating in southern Alabama. Even after being here for just under 24 hours, some of the storylines of the week are beginning to take shape. Here’s the rundown:

Danny Shelton: Is He Just Kinda Good or Top-Five Good?

Personally, I have yet to see the ability that makes Shelton more than a Louis Nix type at the next level, but the hype on him seems to be real. I have heard casual talk that he could go as high as fifth overall to Washington, and all signs point to him being a first-round lock this spring. Shelton is a huge human being, but he looked slightly out of shape at the weigh-in. It will be intriguing to see if he can translate his production as a Husky to the next level.

Jameis Winston over Marcus Marcus Mariota, But There is a Caveat

Even though neither player is actually in attendance (Mariota had the chance but turned it down), this seems to be a consensus opinion. Tampa Bay seems fairly locked in on taking Jameis Winston first overall at this point in time. The off-field issues do not seem to be giving too many teams pause in terms of considering Jameis as a prospect. However, the elephant in the room is his love of baseball. Some decision-makers feel that Jameis wants to be the next Bo Jackson and play both football and baseball professionally. This could be a turnoff for teams who feel that Jameis should dedicate himself fully to football.

Amid the hundreds of weigh-in Tweets on Tuesday, the weirdest vibe I got was when I watched Owamagbe Odighizuwa (heretofore known as Diggy) walk across the stage to get weighed. Diggy has had two hip surgeries and it shows in how he is built. Even just walking across the stage, his hips looked tight. Diggy did weigh in extremely well and has great tape, but to me he is a hand-down strong side end at best in the NFL. Diggy might get some top 20 hype this week, but he’s probably a second day player for me.

The former Auburn and Georgia quarterback has opted to move to the other side of the ball and try his hand at catching interceptions rather than throwing them, per multiple reports. Marshall measured in at 6 foot 1 and 205 pounds, which are pretty good numbers. It should be interesting to see how Gus Bradley coaches him over the next few days and what sort of development he shows.

Tyler Varga Is Going to Blow Up

This is the player to watch in Mobile this week. At Veet’s, the local watering hole where most of the NFL personnel gather, Tyler Varga was on the tip of everyone’s tongues. Ian Rapoport noted that he’s heard Varga is highly regarded. Multiple CFL people mentioned that Varga is probably the top pick in this year’s CFL draft. And then, at the weigh-in today, Varga blew everyone else away in terms of leg muscle and definition. At 5 foot 10 and 227 pounds, Varga is listed as a fullback but has said that he can run a 4.5 40. He could make himself a lot of money with a good week, potentially even propelling himself into Round 4 or 5 consideration.