March Madness is just around the corner. No, really, it’s in two weeks. Yeah, the season went by fast.

As conference tournaments get underway this week and next, it’s time to take a swing around the country and look at some of college basketball’s top scorers. All of these players should have a tangible impact on March Madness. If you haven’t been paying close attention to college hoops, now’s the time to get acquainted.

The Boilermakers have slowed down a tad in February (slowed down meaning “lost three Big Ten games after going undefeated through January”), but Edwards is lighting the conference aflame. He’s averaging over 23 points per game in February, including dropping 40 in a win over Illinois last week. On the season, Edwards is shooting over 40 percent from 3-point land, but he can score from anywhere and run Purdue’s high-octane offense to a T. The Boilermakers are a potential Final Four team, due in large part to Edwards.

The Big Ten Player of the Year was also one of the breakout players of the year. Nobody saw Bates-Diop — or the Buckeyes — coming, but he rode an early-season run to stardom. Bates-Dip racked up 11 straight KenPom MVPs from December to mid-January and despite some regression, he continued to crush it. He’s coming off a 24-point, 14-rebound performance in Ohio State’s season finale, a double-overtime win at Indiana. When he stays efficient, Bates-Diop is an absolute menace. In addition to his scoring touch, his 26.4 percent defensive rebounding rate in the Big Ten ranks second in the conference.

Xavier is on pace for a top-two seed in the NCAA Tournament and Bluiett is a major reason why. The senior is putting up 19.2 points and 5.6 rebounds per game on a 57.2 effective field goal percentage. Ironically, Bluiett is coming off one of his worst games of the season, a two-point outing against a bad Georgetown team, but he put up 26 and 37 points in the two games prior. He can shoot it well from 3 and finishes decently at the rim. Along with JP Macura, Bluiett is the reason Xavier’s offense — ranked seventh in adjusted efficiency — runs as well as it does.

Speaking of Big East scorers, Brunson is at the head of another team likely to pick up a 1-seed on Selection Sunday. The junior point guard has an absurd 61.3 percent effective field goal percentage this season, shooting 41.3 percent from 3 and 70.4 percent at the rim, per BartTorvik.com. Brunson is averaging just over 19 points per game and has a 27.6 assist rate to boot. Brunson has yet to put up a game with single-digit scoring this season. He’ll be a handful for whichever team has the unfortunate task of facing ‘Nova in the Big Dance. 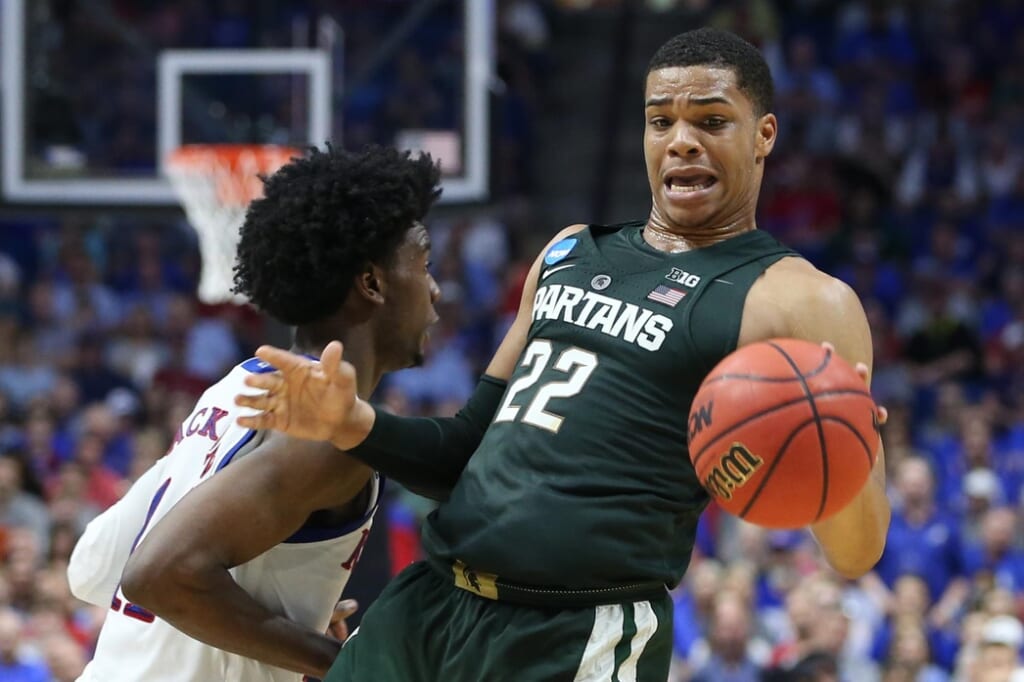 There’s a good argument to be made that Bridges isn’t the best player on the Spartans. Michigan State is a different team with Nick Ward on the floor, Jaren Jackson and Joshua Langford add a lengthy switchable aspect, and all three (along with Cassius Winston, for that matter) are more efficient scorers than Bridges. Yet, when the Spartans needed a bucket at Wisconsin on Sunday, they looked to Bridges and — despite a lacking performance on the day and a weekend of din surrounding his name having surfaced in the FBI investigation — he got to the line and made two free throws to put Michigan State up by five. Bridges isn’t the hottest scorer out there, but he’s the guy Tom Izzo will go to in a big moment. He’s more than capable of scoring, averaging 16.8 points per game with a skill set that projects to him becoming a lottery pick. But Bridges is on this list ahead of Ward, Jackson, Langford and Winston (all of whom could easily claim a spot), because he can be Michigan State’s guy late in games.

Though Azubuike’s free throw shooting has been a sideshow in and of itself, the sophomore center is quietly putting together a nice scoring run in February. Devontae Graham is still carrying the load for the Jayhawks, but Azubuike is averaging 15 points per game in February and has seen an uptick in field goal percentage. That’s saying a lot — on the year, he leads the country in effective field goal percentage at 77.7. He’s a massive presence on the interior with thee ability to rebound and block shots effectively in addition to scoring. Azubuike should make some noise in both the Big 12 Tournament and the NCAA Tournament.

Berry’s February has been a scoring clinic. The senior point guard has scored over 15 points in five straight games. He’s also shooting 36.2 percent from 3 and 50 percent from 2 in February, both tied for his best marks of the year. As Berry goes, so do the Tar Heels: UNC hasn’t lost yet in February as of this writing. That’s in part due to schedule — Duke is the only top ACC team they played this month — but a slight resurgence from Berry clearly helped make a difference. If he carries it into March, North Carolina becomes a serious threat to contend for the Final Four.

Rhode Island is quietly well on its way to the NCAA Tournament. The Rams are cruising in Atlantic-10 competition and have lost just one game since December 6, thanks in large part to Terrell. The senior wing is averaging 17.6 points on a 58.4 true shooting percentage. Terrell can stroke it from outside with a 42.1 percent mark from 3 on the year. When it comes to recent success, Terrell has slowed down a tad in February, but he’s still integral to the Rams’ success. His scoring inside the arc needs to get a little more efficient — Terrell is shooting just 37.5 percent on two-pointers in February. If it does, Rhode Island could cause some shockwaves in March.

If he was distracted at all after it came out that Arizona head coach Sean Miller discussed paying Ayton $100,000 over the phone, he didn’t show it on Saturday at Oregon. While the Wildcats were without Miller, Ayton dropped 28 points and grabbed 18 rebounds in a game Arizona went on to lose in overtime. Potentially the top pick in the summer’s NBA Draft, Ayton’s season is peaking at the right time. He’s averaging over 20 per game in February and picked up double-doubles in his last three games. He’s swatting away shots at a 6.3 percent rate and has an impressive 9.3 assist rate headed into March as well. Putting together a run in March will be difficult for Arizona, which figures to be one of the FBI investigation’s biggest targets, but Ayton is the type of player who can put a team on his back. We may be seeing him do that right now. 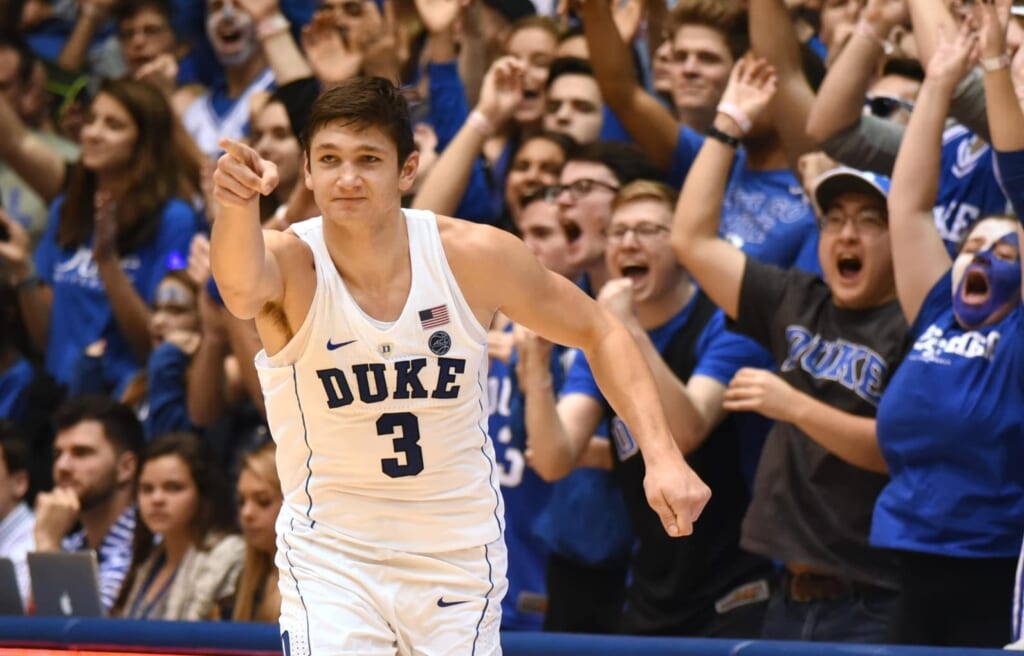 As far as Duke goes, Marvin Bagley is a better scorer. But thanks to injuries that kept him out for much of February, it’s hard to argue the freshman is hot going into March. Allen has scored over 19 points in five of his last six games. Among the actual players, he’s the face of Duke basketball (and everything most people hate about it). Coach K will go to Allen late in games over Bagley, Gary Trent, Trevon Duval or Wendell Carter. At this point, the senior is well-acclimated to postseason basketball. Allen can handle the pressure — he’ll still be a player come March.

It’s no secret that the senior guard is the Mountaineers’ star. However, Carter’s effectiveness depends largely on his efficiency. His 49.4 effective field goal percentage on the year is somewhat underwhelming, especially for a player used on over a fourth of possessions. However, Carter’s last two games have seen a switch flip. He put up 24 points on 8-of-13 shooting from 2 and 1-of-4 from 3 against Iowa State last week. Then, against Texas Tech on Monday, Carter went for 21 points on 6-of-9 shooting from 2 and 2-of-5 from 3. Unsurprisingly, West Virginia won both contests. To be clear, the Mountaineers can win when Carter doesn’t play his best. More than likely, they’ll win a handful of games in March regardless. But if Bob Huggins’ squad is going to make a run, it’s imperative that Carter keep his efficiency up.

Assuming the Blue Raiders can hold through Conference-USA (they’ve lost just one conference game all year), King will give some team a lot of trouble in the first round of the NCAA Tournament. He’s put up over 20 in five straight and averages 21.5 on the year. This from a two-time transfer who scored a piddly 3.3 points per game at Alabama last season. King has been a major boost to a Middle Tennessee squad on its way to a third straight NCAA Tournament berth. In addition to being a major scorer, he’s averaging 8.3 rebounds per game. King has five double-doubles in February. Expect him to add to the total in March.

Did you really expect Young wouldn’t be on this list? Yeah, he’s slowed down from looking like the next Stephen Curry through January. So has Oklahoma, which has won just one game in February as of this writing and could find itself on the bubble as a result. Thing is, Trae Young is still really freaking good. He’s still leading the country in assist rate — at nearly 50 percent — and points per game at 28.3. He’s averaging just over 22 per game in February, enough to make it onto this list. If the Sooners are in, nobody wants to play them and he’s the reason why. Until that changes, Young deserves to be on this list.

Adams is the only player on this list whose team could seriously find itself out of the proceedings when March Madness comes around. The Bonnies are scrapping and clawing — an upset win over Rhode Island helped a lot — but an early exit in the A-10 Tournament could spell doom. Whatever. Adams put up two 40-point games in February, and that wasn’t a typo. He had just one game with less than 20 points all month and zero with less than five assists. If that doesn’t qualify him as hot heading into March, nothing does. If St. Bonaventure does get in, good luck stopping Adams.