12 unheralded players set to step up in NFL Week 3 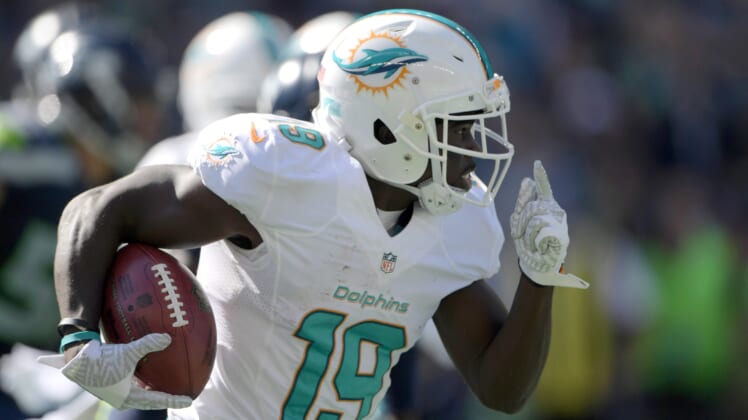 It’s been a memorable start to the 2018 season with standout performances that turned lesser-known players into sudden sensations. This week we take a look at 12 new players who could emerge under the spotlight.

In Week 2 we saw Jacksonville Jaguars wide receiver Keelan Cole go from a name talked about among analysts to being featured on SportsCenter for his one-handed catch. Each week it’s a different player, a different story and a new breakout star.

Here are 12 unheralded players set to step up in NFL Week 3.

While all eyes will naturally draw towards Antonio Callaway as the emerging receiver without Josh Gordon, the real player to watch is Higgins.

He impressed in the offseason and in Week 2 with Gordon out, finished with a team-high seven targets. This is a target trusted by quarterback Tyrod Taylor, and while Thursday’s matchup against the New York Jets may not light up the scoreboard, this offense desperately needs to move the football.

Given Jarvis Landry might be limited with a knee injury, don’t be surprised if Higgins emerges as Cleveland’s top receiver against the Jets and help them pick up a victory.

In a defense that has flashed signs of improvement this season, Brice is showing the ability to make a difference in Mike Pettine’s defense.

The 24-year-old shined in the opener against the Chicago Bears with nine tackles and a sack in a big win. He then took a step back against the Minnesota Vikings, showing the frustrating inconsistency of a young player.

This week’s matchup against the Washington Redskins should provide him a new opportunity to stand out. He has shown that ability, and Washington’s offense is far easier to contain and make plays against than Minnesota’s. Green Bay’s defense should turn things around in Week 3 and Brice will be a big part of that.

Whether DeVante Parker was healthy enough to play in Week 2 is up for debate, but it seems clear there is a change looming in Miami.

Grant has earned trust from this coaching staff, and while he fell short of expectations against the New York Jets, this week’s matchup is an opportunity to turn the narrative around.

Miami will want to see more from its 25-year-old receiver and that should result in a game with five-plus targets against the Oakland Raiders. Ryan Tannehill will have plenty of time to throw and that could lead to some big plays for Grant.

Indianapolis surprised in Week 2 with a win over Washington, but it’s difficult to expect this team to hang around most weeks.

The Colts will face the Philadelphia Eagles and quarterback Carson Wentz, so Andrew Luck’s offense will almost certainly fall behind in this game. We saw in a similar situation in Week 1, Luck relied upon Hines to try and get back in the game.

Hines is capable of playing a Chris Thompson-like role in this offense, which means plenty of targets and catchups when the game script is right. It should be perfect in this matchup, leading to a productive day for Hines.

Baltimore avoided a potentially season-ending injury to linebacker C.J. Mosley, but a bone bruise will likely keep him out of action for at least a week. In his absence, Onwuasor slides inside to take on a bigger role.

This week’s matchup against the Denver Broncos will ask Onwuasor to focus a lot on the running backs. Denver will likely want to establish Royce Freeman early in the game and feed plenty of touches to Phillip Lindsay.

It will be key for Onwuasor to read the plays correctly and react quickly to help take Denver’s running game away. If he can do that and the edge rushers put pressure on Case Keenum, it could lead to a big win at home for Baltimore.

Leonard Fournette’s status for Week 3 is still undetermined, but the 23-yeard-old’s hamstring injury forced him out of practice and remains a concern for the team.

While the focus before Week 2 was on T.J. Yeldon, Grant finished with more total yards (87) and was relied upon heavily in the passing game. Given how well Jacksonville’s passing attack performed in Week 2, there is little reason to turn away from it this week.

Even if Fournette returns to action, Grant has found a role on third downs. At a time when more NFL teams are looking to feed targets to backs, Grant is the player to watch in Jacksonville.

Losing Joe Mixon for the next two-to-four weeks is a blow for Cincinnati’s offense. Fortunately, it’s a temporary hit and it does allow the Bengals to see what Walton has to offer.

A fourth-round pick in the 2018 NFL Draft, Walton is a gifted back who would have been drafted much higher if not for a college career riddled with injuries. Now healthy and ready to slide into a featured role as a runner, Walton is primed to show his talent.

The Carolina Panthers struggled to stop Tevin Coleman in Week 2. If Cincinnati’s offensive line can create some holes, Walton has more than enough vision and burst to rack up the yards and keep this running game afloat.

In a matchup of the city, the Rams will need every player to step up against an extremely talented offense. While much of the emphasis will be on the Rams’ cornerbacks, safety play will be critical.

The Chargers love to feed their running backs, and Johnson III will be needed to help come up and stuff the running game. These are the exact type of games he was drafted for, to be a stopper and help to take away a core element of the Chargers offense.

Just as Johnson will be a player to watch in “Battle: Los Angeles“, a fellow member of the 2017 draft class is also highlighted in this week’s matchup.

After a rollercoaster rookie season, the former No. 7 overall pick will be tested against a stout secondary. Whether he draws Marcus Peters or Aqib Talib, the Chargers need the 6-foot-4 receiver to finally deliver his first breakout game.

This isn’t a question about raw talent, as Williams has plenty of it. It’s all about the second-year receiver finally turning that into consistent production by being able to use his size and physicality to win against opposing cornerbacks. This could be the week where Williams finally makes a name for himself.

The Steelers will likely put Joe Haden on Mike Evans, but the real matchup to watch is Hilton against Jackson. This will be a tough matchup, but Hilton has demonstrated in his early career that he can perform well in coverage and he has the instincts for this matchup as well. If he can just keep Jackson from the big plays, Pittsburgh will be in good position for a win it desperately needs.

Now healthy and with a steady quarterback behind center, Butt is finally in a position to deliver upon the expectations many had for him as a standout in college.

Things started well in Week 1 with four targets and progressed even further in Week 2 with four receptions for 48 receiving yards on six targets. It’s clear Butt is finding a role in this offense.

Baltimore will focus its attention defensively on Emmanuel Sanders and Demaryius Thomas, as it looks to rebound from a brutal showing against the Bengals. By giving more attention to the receivers, Butt could find himself in line for a career-best day on Sunday.

Dallas could be on the verge of developing its second defensive end into a fearsome pass rusher. It all creates a nightmare scenario for the Seahawks in Week 3.

So much attention by Seattle will go towards DeMarcus Lawrence, which will leave Charlton free to take advantage of one-on-one situations. Russell Wilson was sacked six times in Week 2, and there appears to be no answer in sight for Seattle’s porous offensive line.

Charlton is a Pro-Bowl defensive end in the making and is set to face one of the worst offensive lines in the league. This has all the makings of a monster game and one that could see him rack up two-plus sacks with even more pressures and quarterback hits.