The college football world typically has a good understanding of Heisman Trophy contenders. Sometimes, though, an unexpected candidate emerges.

Last season, Arizona’s Khalil Tate, Central Florida’s McKenzie Milton and Wisconsin’s Jonathan Taylor were among the breakout sensations. When the season began, nobody expected them to contend for the award.

Nevertheless, a couple of quarterbacks and running backs will always stand out. Where might they come from in 2018?

While we’d love to suggest a defensive player could surprise and shoot up Heisman lists, that’s not likely. In the last three top-10s of Heisman voting, 27 of the 30 players have been either a quarterback or running back.

Despite splitting carries with Jacques Patrick and running behind a mediocre offensive line, Cam Akers notched 1,025 rushing yards and seven touchdowns as a freshman. The story will mostly be the same in 2018. However, the main difference is a potentially good one. New coach Willie Taggart brings a dynamic offensive system that is historically friendly to running backs. Over the last four seasons, his players have posted at least 990 rushing yards six times and 1,500 twice. If Akers’ role increases as FSU’s offensive pace does, he’ll be a Heisman threat.

Oklahoma’s offensive line lost a popular name in Orlando Brown, but the unit returns three All-Big 12 starters. Plus, while Kyler Murray has captured the nation’s attention as Baker Mayfield’s replacement, Rodney Anderson is primed for another electric season. Last year, he collected 1,161 yards and 13 scores on the ground and added 17 catches for 281 yards and five touchdowns. Anderson piled up those numbers despite totaling just 15 touches throughout Oklahoma’s first five games. There’s no question he’s the No. 1 running back entering 2018. 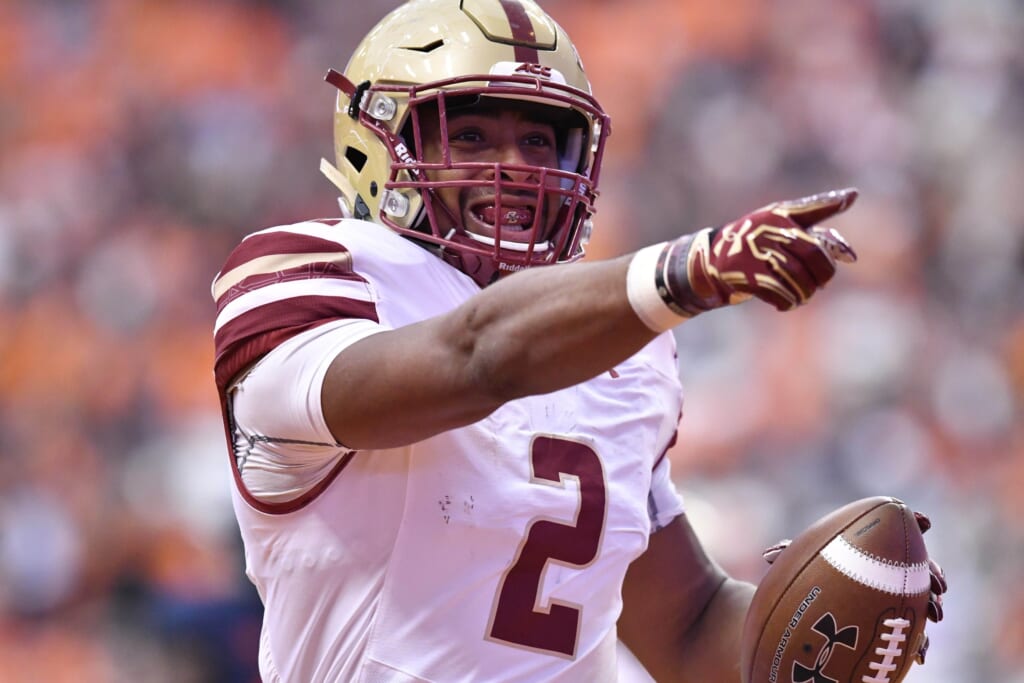 AJ Dillon won’t be sneaking up on any coaches, but he’s likely not a recognizable player to casual fans. After all, Boston College only won seven games last season. But the Eagles wouldn’t have reached that mark without Dillon, who dismantled defenses from mid-October through bowl season. In that seven-game stretch, he tallied 1,256 rushing yards and 12 touchdowns. Dillon topped out at 272 against Louisville and hit 190-plus three other times. He could follow in the footsteps of former BC back Andre Williams, who finished fourth in 2013 Heisman voting.

Not only will the decision between Kelly Bryant or Trevor Lawrence affect Clemson, it’ll shape Travis Etienne’s award hopes. If the Tigers pick the dual-threat Bryant, he’ll handle 10-plus carries per game. But if Lawrence wins the job, he’s more of a pocket passer. Suddenly, there would be extra carries available for Etienne. Given that he piled up 766 yards and 13 touchdowns on only 107 attempts last year, it could nearly double his role — and production. Since the Heisman often goes to the best player on a title contender, Etienne would be a front-runner.

After seeing what Joe Moorhead accomplished with Trace McSorley at Penn State, we shouldn’t overlook Nick Fitzgerald’s potential. Over the last two seasons, he amassed more than 6,000 yards of total offense and accounted for 66 touchdowns. The main problem Fitzgerald has encountered is poor showings against top competition. Mississippi State is a combined 1-6 against Alabama, Auburn, Georgia and LSU since the beginning of 2016. But if Moorhead’s arrival plus a stout defense leads to a 10-win campaign in Starkville, Fitzgerald will deserve a look.

We know Myles Gaskin will thrive. He’s tallied at least 1,300 rushing yards in three straight years, also cresting 1,500 all-purpose yards during the last two. Gaskin even scored a career-high 24 total touchdowns last season. However, he’s never finished top-10 in Heisman voting. The senior might need 1,800 yards, 25 touchdowns and Washington to win a Pac-12 title to attract that level of attention. Fortunately for Gaskin, the Dawgs should have a tremendous offensive line and are the conference favorite. He’s worth monitoring as long as UW keeps winning. 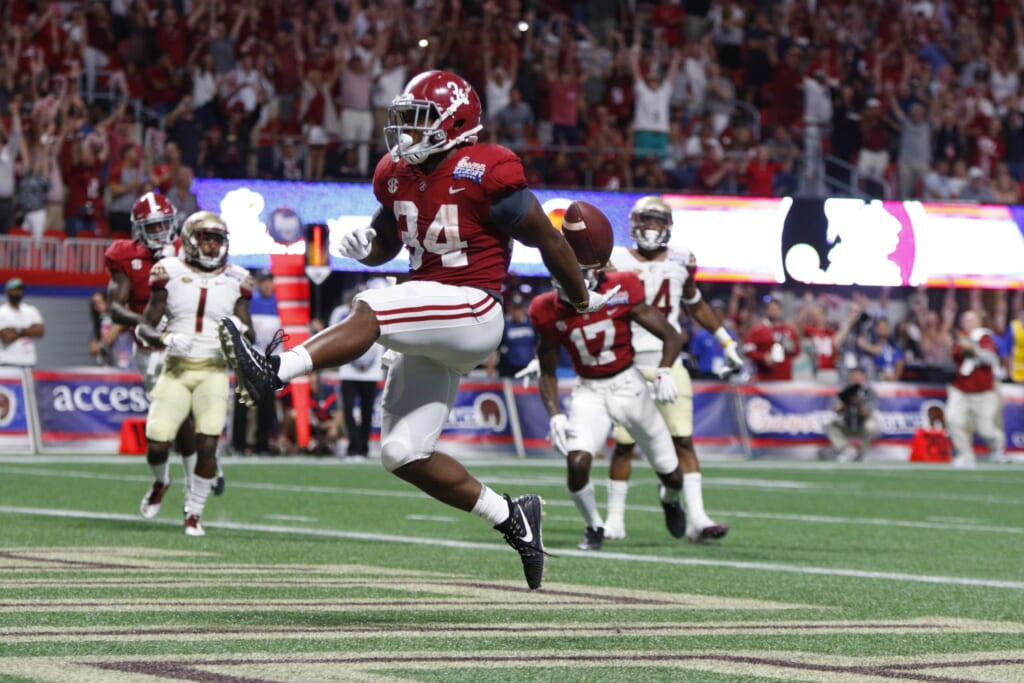 The situation at Alabama is relatively similar to Clemson. One potential quarterback (Jalen Hurts) is known for his mobility, and the other (Tua Tagovailoa) is a polished passer. If the latter starts for the Crimson Tide, that will benefit Damien Harris. He’s quietly reached the 1,000-yard plateau in two straight seasons, and he posted a team-best 11 rushing touchdowns last year. Even with star sophomore Najee Harris set for a larger role, Damien is the known commodity. Alabama can lean on the senior, and he’ll be a reliable contributor behind a seasoned offensive line.

After losing Mason Rudolph, James Washington and Marcell Ateman to the NFL, Oklahoma State might slip into the background of the Big 12 this season. But if the Cowboys are still a contender, go ahead and credit Justice Hill. The standout running back piled up 1,142 yards as a freshman and 1,467 last season, also scoring 15 touchdowns and catching 31 passes. Hill’s combination of involvement and versatility could lead to Heisman-caliber numbers. At that point, the decisive question for his candidacy will be whether OSU is a Big 12 contender or simply a bowl team.

Michigan State, you have our attention. Despite the quartet of Michigan, Ohio State, Penn State and Wisconsin securing most headlines, the Spartans are a real contender thanks to experience around Brian Lewerke. MSU brings back five linemen with at least seven career starts and four of the top receiving targets. Basically, the only change is losing one starting lineman, and Lewerke collected 3,352 yards of total offense while accounting for 25 touchdowns last year anyway. If the Spartans navigate the tricky East Division, Lewerke should have the production to justify a Heisman review.

San Diego State has championed a 1,200-yard rusher in eight straight seasons. Donnel Pumphrey and Rashaad Penny eclipsed 2,000 in 2016 and 2017, respectively, and were top-10 Heisman finishers. Juwan Washington may continue that remarkable trend. He gathered 759 yards and seven touchdowns in a backup role last year, and the Aztecs return four full-time and one seven-game starter from that offensive line. While this isn’t fair, the truth is Washington won’t be a popular choice if he doesn’t excel in every game. Still, there’s a realistic chance he’ll pace the nation in rushing.