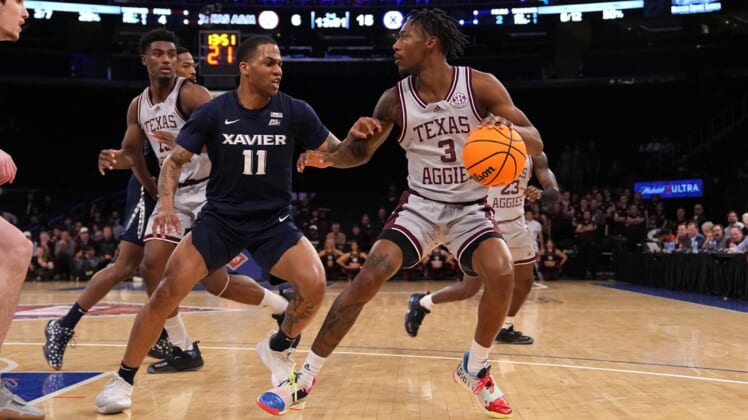 It was the last of 15 points for Nunge, who added 11 rebounds and four assists as the Musketeers (23-13) went 4-0 under interim coach Jonas Hayes after coach Travis Steele was fired following a first-round win over Cleveland State on March 15.

With new coach Sean Miller watching from behind the Xavier bench, the Musketeers also got 21 points from Colby Jones and 18 from Dwon Odom. Xavier hit nearly 54 percent of its shots in the second half.

The Aggies (27-13) had a chance to win it as time expired, but Tyrece Radford’s running 3-pointer from the left wing rattled in and out. It was just their third loss in 14 games.

Quenton Jackson scored a game-high 23 points for Texas A&M, going 12 of 14 at the foul line. Radford finished with 15 and reserve Hassan Diarra added 12 points. The Aggies were outscored 40-32 in the paint.

Xavier came out and threw the first punch, establishing a 15-6 lead less than five minutes into the game when Jones drilled a 3-pointer off a Texas A&M turnover.

But the Aggies controlled the rest of the first half, using their staples of defense and balanced scoring. They went on a 14-4 run, grabbing a 20-19 edge at the 7:19 mark after Diarra canned a 3-pointer in transition.

Texas A&M rattled off a 16-4 burst after trailing 26-24, upping its advantage to 40-30 when Radford put back Jackson’s missed layup. However, the Musketeers got the last say when Jones drove into the lane for a layup just before time expired, slicing their deficit to eight at halftime.

The Aggies finished the half at 56 percent shooting and also went 9 of 10 at the foul line.