Winners, losers from Vikings’ overtime win over the Saints in wild-card round 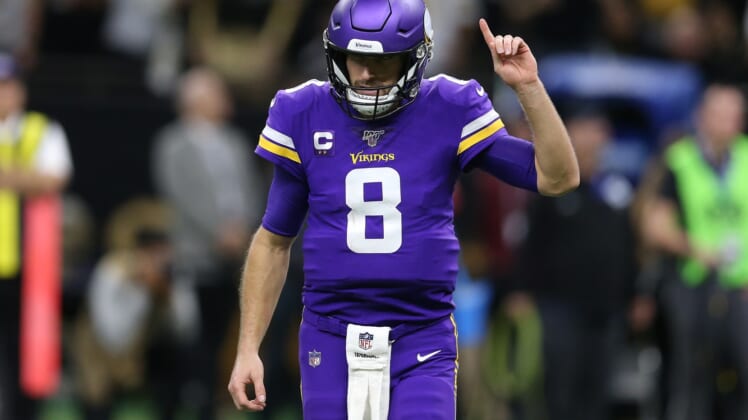 After a thrilling opening to the playoffs on Saturday, the Minnesota Vikings and New Orleans Saints delivered another nail-biting finish on Sunday. Drew Brees and Kirk Cousins each had the chance to silence the skeptics, but only one stepped up when it mattered.

New Orleans’ offense came out slow as Brees struggled to help this team find any rhythm. Fortunately for the Saints, folk hero Taysom Hill saved the day in seemingly every moment and kept this team alive.

Despite playing in hostile elements and being underdogs, the Vikings brought it to the Saints in the Superdome. Dalvin Cook came back healthy and looked strong, while Minnesota’s defensive line came alive with a relentless attack that kept this contest tight.

The game went to overtime, presenting Cousins with a chance to quiet the critics and reverse the narrative that he falls short in the clutch. That’s exactly what he did, delivering some of the biggest throws in his career and stunning the Saints.

Here are the biggest winners and losers from Vikings’ stunning overtime win over the Saints in Sunday’s wild-card action.

It wasn’t always pretty from Cousins. He missed some throws early, but his teammates kept this game alive. When opportunity knocked and the Vikings needed their quarterback to step up in overtime, he delivered and became a hero in Minnesota.

While the broadcasters questioned the Vikings for putting the ball in Cousins’ hands, he quickly silenced them. The unbelievable 43-yard strike was placed in the perfect spot, putting Minnesota in position to win it. After Dalvin Cook couldn’t punch it in, Cousins dropped back and delivered the perfect pass to Kyle Rudolph to quiet the Superdome for good. We like that clutch gene, Kirk.

Diggs’ game-winning touchdown in the 2018 playoffs put Saints fans through a wave of negative emotions. This time around, it was Diggs who was left having emotional outbursts and frustration.

He didn’t even face Pro Bowl cornerback Marshon Lattimore. Diggs was basically erased by Janoris Jenkins, who the New York Giants gave up on. The star receiver’s most notable moment was an emotional outburst on the sideline. Diggs is a great player, but he showed on Sunday that he still has room to grow. If the Vikings want to keep their Super Bowl hopes alive and deliver another upset next week, Diggs will need to beat Richard Sherman to do it.

New Orleans entered the playoffs with a healthy offensive line for the first time in weeks. We can’t imagine how much uglier things could have been if Minnesota’s ferocious front faced backups.

This was a collective effort of dominance. Danielle Hunter and Everson Griffen dominated off the edges with three combined sacks and brought countless pressure on Brees. On the interior, defensive tackle Jayln Holmes came through in the clutch with a key fumble recovery. Credit to Minnesota’s front four, it overwhelmed the Saints all day and made the difference on Sunday.

Brees looked incredible near the end of the season and set NFL records in the process. We never saw that version of the future Hall of Famer on Sunday. Instead, Brees looked like a 40-year-old quarterback who couldn’t evade a pass rush, struggled to make anything but the simplest of throws and made some costly mistakes.

When Brees wasn’t funneling targets to Michael Thomas, this offense struggled to gain yards. The biggest play through the air came from Taysom Hill’s arm then Alvin Kamara punched in the touchdown. Just when he started to put it together late, he committed another egregious turnover. Brees is certainly a Hall of Famer, but it’s hard to ignore his repeated failures in recent playoff moments.

It might be time to build Hill a statue. As Drew Brees struggled mightily in the first half, Hill came through for the Saints. He delivered the monumental 50-yard strike to put New Orleans at the four-yard line then delivered the key block on Alvin Kamara’s touchdown run.

Finally, Brees and the passing attack started clicking late in the fourth quarter. After moving the ball downfield, Hill broke open in the end zone and hauled in the pivotal touchdown to make it a one-score game. Oh, he also led the team with 50 rushing yards. After the Saints re-sign Brees this offseason, Hill must become their top priority.