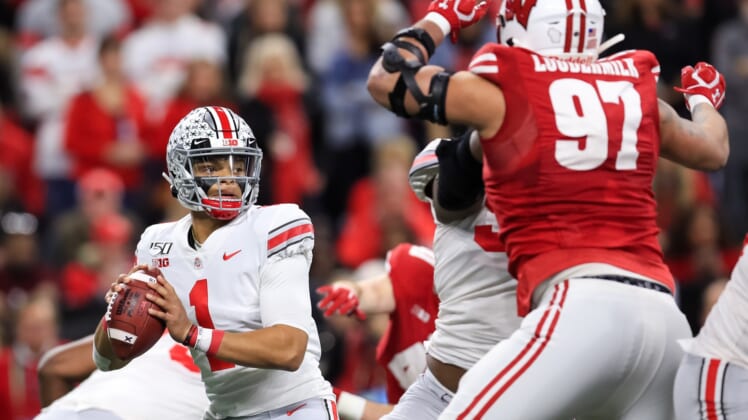 The No. 1-ranked Ohio State Buckeyes went into halftime down two touchdowns after being shocked by Wisconsin in the Big Ten Championship Game. Then, Ryan Day’s team made adjustments in the locker room.

Those adjustments worked wonders, as the Buckeyes dominated the third quarter and picked up steam in the fourth. The end result was a 34-21 comeback win that secures Ohio State’s position as a College Football Playoff team.

Here, we take a look at the biggest winners and losers from Ohio State’s comeback win over Wisconsin during Saturday’s Big Ten Championship Game.

Winner: Justin Fields is pretty darn good on one leg

Ohio State quarterback Justin Fields injured his left knee last Saturday against Michigan, suffering an MCL sprain. He wore a brace on that leg this Saturday during the Big Ten Championship Game, and it appeared to give him trouble early on.

After a rough first quarter, Fields started to get into a bit of a groove. Then, he and his receivers got into a tremendous rhythm in the third quarter, and kept right on grooving in the fourth.

All told, Fields racked up 299 yards and three touchdowns through the air to lead the Buckeyes to victory, despite being obviously uncomfortable and without the ability to do much on the ground like he usually does.

Loser: Jack Coan fell apart in the second half

One of the big reasons Wisconsin built up a 21-7 lead in the first half is that quarterback Jack Coan made huge plays when it mattered. He opened the game with a 27-yard strike to Quintez Cephus, passed for 100 yards and ran in two scores in an inspired performance.

Unfortunately, the second half saw Coan fall apart. The junior quarterback looked like a completely different player. He got rattled. He panicked. He was inaccurate. It wasn’t until late in the fourth quarter when the game was already over that he got back into a comfort zone.

As a result, Wisconsin’s offense was unable to keep pace with the suddenly wide-awake Ohio State offense. Game over.

Winner: Jonathan Taylor and J.K. Dobbins put on a show

Taylor opened the game with a 44-yard touchdown that sparked Wisconsin’s first-half domination. Dobbins was the meat grinder that chewed up the Badgers’ front seven and wore down the clock in the second half.

The two young stars combined to pile up 328 yards and two touchdowns from scrimmage. They’ll both be playing on Sundays for a lot of money, very soon.

Loser: Refs may have altered the outcome

The Buckeyes pulled ahead of the Badgers for the first time when Fields found K.J. Hill open in the end zone in late in the third quarter. This score came on the heels of two straight scoring drives for Ohio State, along with a fumble and missed field goal for Wisconsin to open the second half.

It was the tipping point of the game, to be sure.

Now here’s the kicker. The refs missed a blatant false start on this play. Buckeyes receiver Garrett Wilson clearly moved illegally (watch here). Wisconsin defenders were pointing at him but the refs just let it happen without a penalty.

We don’t know what would have happened if the false start had been called. Maybe the Buckeyes would have scored a touchdown, anyway. But a game that was still very much up for grabs was altered due to a brutal faux pas by the refs.

For Wisconsin, the passing game was almost Quintez Cephus or bust most of the night. Jack Coan was unable to get into any rhythm with receivers other than Cephus, but when he threw the ball to the junior receiver it paid off more often than not.

Cephus came up with seven catches for 122 yards. Though he was unable to spark a victory for his team, Cephus was one of the best players in the Big Ten Championship Game. Period.