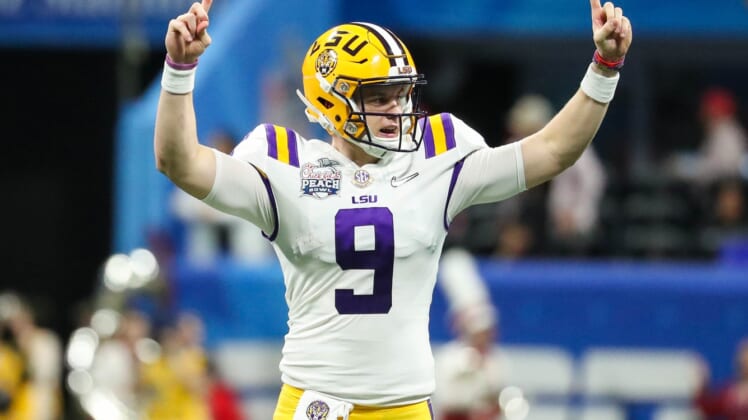 It didn’t take long for No. 1 LSU to end No. 4 Oklahoma’s Playoff dreams Saturday as the Tigers went on a first-half rampage en route to a blowout win.

After one quarter of play, LSU was up by the score of 21-7. Just a few minutes into the second quarter, and the Tigers had extended that lead to 35-7. It just got worse from there.

The game was over well before halftime arrived, and in the end LSU advanced to the College Football Playoff final with a 63-28 victory that should result in the Tigers being heavy favorites for the championship game.

These are the biggest winners and losers from LSU’s stunning blowout win over Oklahoma.

Winner: Joe Burrow with another masterpiece

Heisman winner Joe Burrow had a first half most quarterbacks can only dream about, and fans across the nation were simply in awe. He had more touchdowns than incompletions, tossing seven first-half scores.

Burrow and the entire LSU first-team offense could have watched the second half from the sideline and still walked out of Atlanta with a blowout win. Instead, Burrow played a bit more in the second half, finishing with 515 yards and eight touchdowns from scrimmage.

Just an incredible performance to spark a blowout win and send LSU to the championship.

Loser: Not the finale Hurts hoped for

What a stark contrast between the game Burrow had and what Jalen Hurts was going through on Saturday. The former Alabama quarterback finished off his collegiate career with a brutal game. Hurts was clearly rattled early as LSU’s swarming defense bottled him up and kept him from running wild.

He finished the first half having completed just 5-of-18 passes for 101 yards (thanks mostly to CeeDee Lamb), no passing touchdowns and an interception. The second half gave Hurts more opportunities to make plays, but it was far too little, way too late.

In the end, he watched the final minutes of his final game from the sideline as Lincoln Riley pulled him in the fourth quarter.

Joe Burrow was cooking with fire Saturday, and his main playmaker on offense was, too. Justin Jefferson came into Saturday’s Peach Bowl with 14 touchdowns on the season. Before the end of the first half, he had 18 of them, making history in the process.

Jefferson’s four first-half touchdown receptions marked the most any player has ever had in a single College Football Playoff game. He went on to finish with 14 receptions for 227 yards and four touchdowns to help send the Tigers to the championship game.

Loser: Sooners defense was a disaster

By every conceivable metric, Oklahoma’s defense had an embarrassing game against LSU in the Peach Bowl. By halftime, LSU had racked up 497 yards and 49 points, making the Sooners look like a last-place JV team going against the varsity state champs.

Quite aside from a gap in talent, the Sooners showed an incredible lack of discipline on the defensive side that was highlighted by an ejection by defensive back Brendan Radley-Hiles. He literally went out of his way to lay a dirty hit on LSU running back Clyde Edwards-Helaire in the first half, rather than going after a scrambling Burrow.

Defensive coordinator Alex Grinch has been praised much of the year for helping turn this defense around. On Saturday, it all came crashing down.

Quite aside from the game itself, LSU’s performance is all the more remarkable due to the heart-breaking tragedy that the program endured just hours before the Peach Bowl kicked off.

Tigers offensive coordinator Steve Ensminger’s daughter-in-law and noted Louisiana sports reporter, Carley McCord, was one of five people who lost their lives in a plane crash on their way to the game Saturday morning.

McCord and the others on her flight were on their way to Saturday’s Peach Bowl when the plane went down. Incredibly, Ensminger remained with the team and coached the Peach Bowl, calling a flawless game from the booth despite dealing with what had to have been an ocean of emotions.

The LSU family united in the midst of tragedy, pulling together for a legendary performance on the field.