Winners and losers from Rockets 117-108 win over the Heat 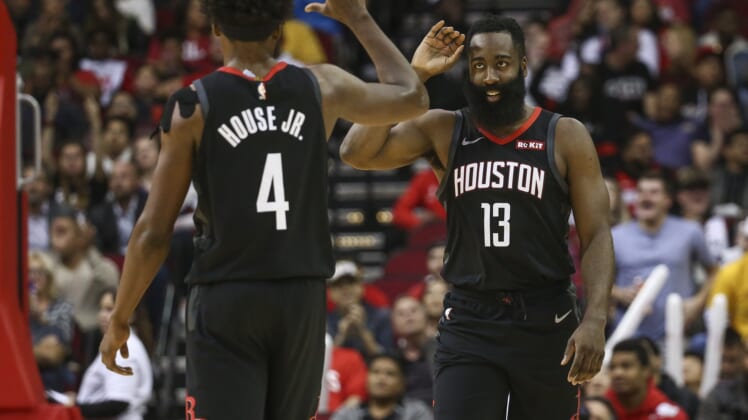 The Houston Rockets took the court on Wednesday night looking for revenge against the Miami Heat for the blowout loss on Nov. 3. They got it in decisive fashion with a 117-108 win.

Both teams played without key starters as Jimmy Butler and Clint Capela were both sidelined with an illness. In their absence, Houston’s starters stepped up while Miami’s went cold for far too long.

Houston snapped its three-game losing streak and its Russell Westbrook-James Harden duo looked better than ever against Miami. In fact, it outperformed Miami’s entire roster in the first half alone by matching them with 42 points.

Things didn’t go as smoothly for the Heat. Miami’s shooters froze on Wednesday night by shooting 38.5 percent with 12 first-half turnovers. While the Heat did make a fourth-quarter comeback, it wasn’t enough to overcome their poor play in the first three quarters.

Here are the biggest winners and losers from the Rockets’ 117-108 win over the Heat on Wednesday night.

We’ve seen Harden play at an MVP-caliber level for most of the year and that only continued against the Heat. He reached 24 points at halftime, getting hot from deep in the second quarter, and his connection with Westbrook stood out.

When the chemistry, comfort and timing are there for these two, they can achieve special things. Harden benefited greatly from it on Wednesday night with more open looks than he saw during Houston’s losing streak. While the Rockets eventually eased up in this decisive win, Harden still finished with 34 points, six rebounds and five assists in a masterful performance.

On a night when Houston’s backcourt dominated, Nunn found himself on the opposite end of the spectrum for Miami. The Rockets attacked him on defense at every chance they got and it allowed them to jump out to an early lead.

Of course, coming up short on the defensive end is more palatable if the player shoots the ball well and gets others involved. Nunn fell far short of that, too. He made only 2-of-10 field-goal attempts in the first half and missed chances to feed Bam Adebayo early to get his momentum rolling. He’s cooling off after an excellent October, but the future is still bright for Nunn.

This is the kind of night fans have been waiting for. The Rockets have primarily been carried through the first 17 games by Harden, buying time until Westbrook came alive. He did that on Wednesday and it became clear long before he finished with 18 points, six rebounds and six dimes after two quarters.

He finished the night with 27 points, nine rebounds and seven assists. Of course, this wasn’t a perfect game for Westbrook. He still got too sloppy with the basketball at times and finished with nine turnovers. Houston will undoubtedly be happy about the win, but the fan base will be feeling even more grateful that Westbrook might finally be settling in and ready to go on a run.

Adebayo came into the night enjoying a breakout season with an opportunity to take advantage of Houston’s lineup without Capela. Unfortunately for the 22-year-old center, he couldn’t take advantage of the improved matchup.

He finished the first half with as many turnovers (four) as points and played a role in Miami getting outrebounded 17-26 in the first half. It also didn’t help that the Heat didn’t get involve offensively early on. It wasn’t a sharp performance, but a matchup on Friday against the Golden State Warriors can make this game a distant memory.

House continues to play through a nagging shoulder injury and his performance tonight showed why he’s so important to Houston. The 26-year-old showed flashes of being a meaningful role player last season and he is taking his game to the next level this year..

Houston’s small forward excelled from behind the three-point line once again and rode his hot touch to a career-high 23 points. House also contributed defensively with two steals. He is made for this type of role in Houston and we could see a few more games like this before the year ends.