Winners and losers from Blazers-Warriors Game 2 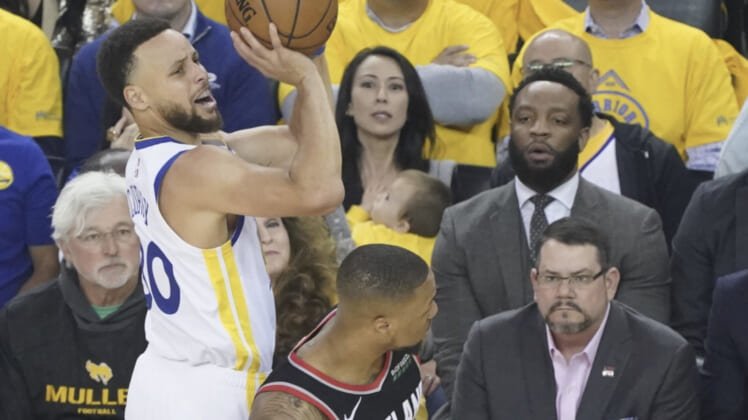 With Kevin Durant having already been ruled out for the next two games of the Western Conference Finals, Game 2 between the Golden State Warriors and Portland Trail Blazers took on even more significance.

From the get go, this was a hotly-contested affair. Blazers star C.J. McCollum was hot early before struggling down the stretch. Meanwhile, Stephen Curry continued to do Stephen Curry things.

In the end, Golden State came out on top by the score of 114-111 in a competitive outing from both teams. Now up 2-0 in the series, we take a look at the biggest winners and losers for the Warriors Game 2 victory over Portland.

After carelessly turning the ball over four times to go along with 19 points in the first half, the older Curry brother stayed within the confines of the game to help Golden State to a huge third quarter run.

Curry finished the game with 37 points while grabbing eight rebounds and dishing out eight assists. He had three assists in the waning minutes, helping the Warriors overcome an eight-point deficit in the process. The two-time MVP simply continues to dazzle.

After struggling in the initial game, McCollum helped his Blazers out to an early lead. He scored 16 points on 6-of-11 shooting and 3-of-4 from distance in the first half. With Damian Lillard having not scored until the final minutes of the half, that was a big deal.

Unfortunately, McCollum came up small down the stretch. He missed his final six shots, including three treys in the final stanza. McCollum finished the game hitting on 9-of-23 shots. Portland was minus-9 with him on the court. That’s not going to cut it.

This former NBA Finals MVP was playing exceptionally well in the playoffs heading into Game 2. For some reason Iguodala seemed sluggish early on. Golden State was minus-13 in the 11 first-half minutes he played. Iggy failed to score during that span.

None of that mattered in the end. Sure Iggy scored just four points. But it was his defense and subsequent steal on Damian Lillard with Golden State up three in the final seconds that made the difference. There’s a reason Iguodala has always been a closer for the Warriors.

This Blazers big man has shown flashes against the Warriors throughout his career. It’s one of the primary reasons head coach Terry Stotts gave him extended minutes early on Thursday night. Collins responsed by scoring exactly zero points while committing five fouls in eight minutes.

Portland will need to get more production from some of its bigs if the team wants to have a chance in the series. Collins came up small with his team facing a 2-0 deficit. It’s that simple.

After struggling in front of his entire family in Game 1, the younger Curry came out and played lights out Thursday night. Seth forced three turnovers of his brother throughout the game, and continued to play elite-level defense.

Curry’s shots were finally hitting, too. He led all Blazers reserves with 16 points and connected on 4-of-7 from distance. Showing his importance to the Blazers, they finished plus-13 with him on the court. It’s why the journeyman finished the game with Portland’s starters.

The first near 20 minutes of this game saw Lillard score exactly zero points. That’s why it was so surprising Portland held a substantial lead into halftime. Lillard then ended up kicking it up a gear in the second half before fizzling out in the end.

He took some wild threes in an attempt to electrify his home crowd. And instead of passing out of on-ball pressure from Iggy, Lillard committed an egregious turnover in the final seconds. It was a horrible two games in the arena Lillard frequented as an Oakland boy. One does have to feel somewhat bad for him.