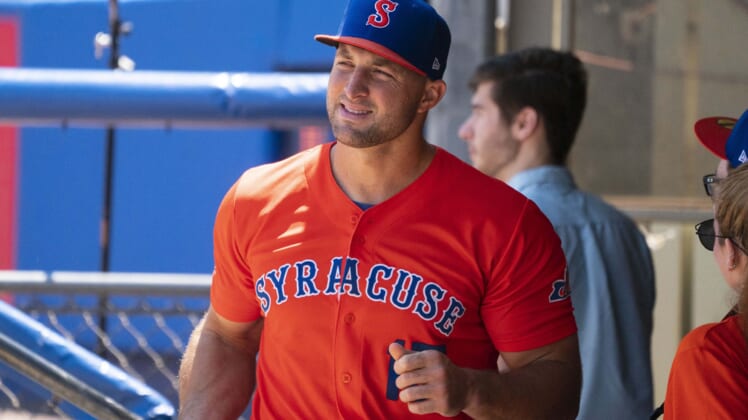 Is Tim Tebow a good MLB player? Not really. Is Tim Tebow a marketing magnet? Heck yes. That’s why the Mets could trade Tebow during the MLB Winter Meetings.

The big picture: Tebowmania is still very much a thing. Despite his struggles in minor league ball, Tebow could still be seen as a player worth having.

Examining Tebow’s struggles: Here’s a quick look at what Tebow has done at each stop on his MLB journey.

During the 2017 season, Tebow played Single-A ball for the Columbia Fireflies and A-Advanced ball for the St. Lucie Mets.

There was some hope that the light was clicking on for Tebow at the plate after his second half in 2017.

During the 2018 season, Tebow played AA ball for the Binghamton Rumble Ponies.

The average went up, but the power numbers did not, and Tebow continued to strike out a ton.

Then, after being elevated to AAA ball in 2019 with the Syracuse Mets, Tebow hit a brick wall.

So clearly, this is a player who’s struggled to string together improvements. And as we wrote last year, the Mets could be getting tired of the Tim Tebow experiment.

Why there’s a market: Tebow could potentially be traded during the MLB Winter Meetings because, quite simply, he sells tickets.

The bottom line: Whether Tebow is good at baseball or not, he sells tickets.

Teams that want to boost minor league attendance numbers, or teams that really believe their system could help Tebow eventually get to the big stage, could certainly look to make a trade for the former college football and NFL star.