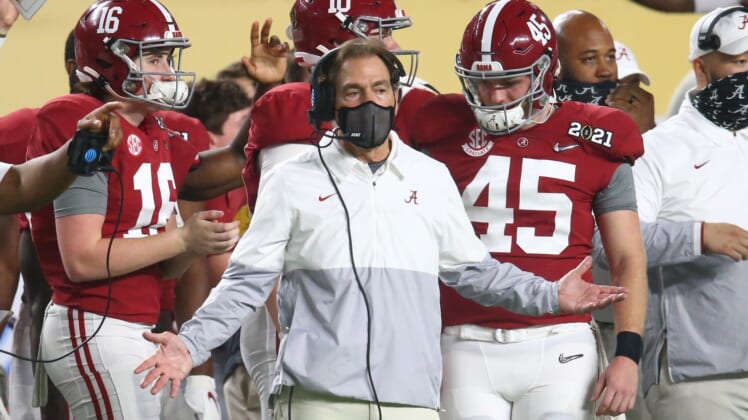 The fact that college athletes can’t make money is among the most hot-button issues in all of sports. While there’s a chance that could change soon, there’s a firm precedent in place that’ll be challenging for pro-payment advocates to overcome.

Here are the primary reasons why college athletes can’t make money, followed by a breakdown of why that may change in the next several years.

Athletic scholarships drastically reduce the overall cost of attending college. Considering it’s been this way for many years and that the NCAA continues to rake in huge profits from TV deals, whose ratings are driven by their best college athletes, there’s not a lot of incentive for the system to change.

Because student-athletes are awarded scholarships to play college sports, that’s expected to be enough.

That may be the case at many schools, and it’s a goal many teenagers strive to reach to pay for their higher education. Playing college sports is where the dream of higher athletic achievement ends for the vast majority of scholarship recipients.

Professional athletes obviously make millions of dollars in many instances. They’re also permitted to pursue endorsement opportunities, accept any sort of commercial payment and profit off their likeness in any way.

Although the NCAA is coming around on student-athletes being allowed to profit off endorsements, they’re still considered amateurs. They aren’t paid annually for their services outside of whatever is included as part of their scholarships.

Like professional athletes, though, college stars at the country’s elite football and basketball programs play a high-stakes, lucrative game with many millions of dollars flying around. Even the players’ coaches are rewarded multi-million-dollar base salaries.

For instance, Alabama football coach Nick Saban is due to make $9.5 million in 2021. Saban has proven capable of producing lots of NFL players, yet even in that extraordinary case, the vast majority of players won’t make it to the pros. Meanwhile, he’s still making money to coach a game that seems more suited for a Fortune 500 company CEO.

Why college athletes may start getting paid very soon

There are plenty of cases where the best college players at the “amateur” level have skill sets that don’t translate to the pros. That’s probably part of the reason why the NCAA came around on players’ ability to seek out endorsements without worrying about rules violations or being suspended.

Let’s look at a couple of factors that tie into this notion to help explain why there’s been building momentum for college athletes to be financially compensated.

Consider one extreme but relevant case study: In a one-year span, off donations alone, Texas A&M brought in $740 million in fundraising, thanks largely to the greatness of Heisman Trophy-winning freshman quarterback Johnny Manziel.

Johnny Football wound up being drafted by the Cleveland Browns, but substance abuse issues caused him to flame out of the NFL. Manziel earned $6.7 million guaranteed in his rookie contract, but lost out on an unimaginable amount of money he helped bring to his alma mater.

He came from a well-off family and has himself to blame for his own failure in the NFL, yet Manziel’s net worth is reported at $6 million, which in reality, is a fraction of what he was worth to Texas A&M.

Since elite athletic programs generate tons of revenue off the performance of the student-athletes, many argue that those athletes should be financially compensated for all the money they bring in. Their achievements also create tons of national exposure and publicity for the school, which the athletes aren’t permitted to profit off of at all.

Retired NBA All-Star and former Georgia Tech standout Chris Bosh wrote a lengthy piece in The Players’ Tribune about how tough his one season with the Yellow Jackets was:

“[…] I still remember trying to figure out how to get groceries when we didn’t have the money to buy them, or when we didn’t have a car we could use to get to the store. I remember feeling hype when the program would buy us Papa John’s for our home games — because it was better than the mystery meat that seven-foot prospects sustained ourselves on in the cafeteria. I remember walking a mile or so back to campus one night after a women’s game with my roommate and teammate, Jarrett Jack. It was my first winter in Atlanta, and we had just missed the school shuttle, the Stinger, because it stopped running around 9:30. Without enough in our bank accounts to pay for a cab to drive us that cold-ass mile back to the dorms, we both lost it. I remember Jarrett throwing up his hands and yelling in frustration, ‘This is not what college is supposed to be about!'”

Bosh also spoke about playing against North Carolina on ESPN while essentially broke, and how he was so worried about not getting injured and possibly tanking his draft stock right before he could make his family financially secure. 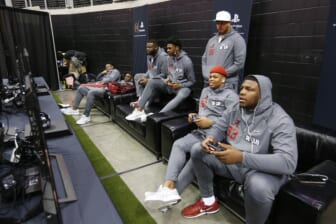 Mind you, this is someone who was a national star, good enough to be a one-and-done college player who then went on to win multiple NBA championships.

For those who stay in school to achieve their degree, struggling to make ends meet, and dealing with the demands of being a student in addition to an athlete, can cause many to fall behind. That backdrop can also significantly lessen the quality of the “free education” they’re getting.

As Bosh’s personal experience underscores, even an elite athlete’s quality of college life might not be up to par even on a “full-ride” scholarship. Oftentimes, that isn’t enough to cover living expenses — even with supplemental stipend checks.

So, not only does the NCAA have tons of money coming in through lucrative TV deals and other revenue streams, but certain schools make millions of dollars annually while not giving their athletes any piece of that pie.

Lawmakers are starting to step up

Spurring the momentum for college athletes to get paid is a bill recently introduced by Senate Democrats, which, if passed, would permit players to unionize. If this landmark legislation goes through, college athletes could negotiate revenue shares, wages and other traditional employee benefits.

Back in 2014, former Northwestern quarterback Kain Colter spearheaded a movement to unionize the Wildcats’ football team. It ultimately fell short, yet set the stage for the latest push in Congress. 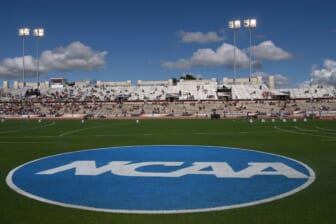 When the federal government is stepping in, you know something is probably off with the NCAA’s current status quo.

So, the notion that college athletes can’t make money is certainly being put to the test of late. With a long history of relatively exploitative practices, it seems athletes are taking some power back from the institutions that govern their collegiate careers.

The question seems to be not “if” but “when” college athletes get appropriate financial compensation.