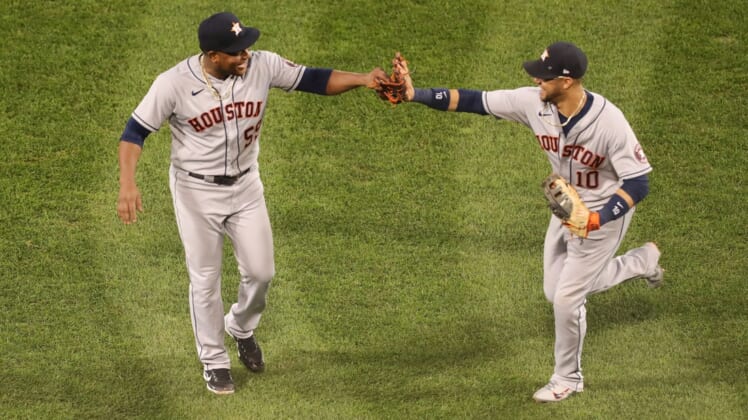 BOSTON — Yordan Alvarez hit a second-inning solo homer and added a two-run double in the Astros’ five-run sixth inning as Houston beat the Boston Red Sox 9-1 on Wednesday night to take a 3-2 lead in the American League Championship Series.

Alvarez (3-for-5) led off the second by homering off Red Sox starter Chris Sale (0-1) into the Green Monster seats in left field. With runners on second and third and one out in the sixth, Alvarez doubled to the wall in left to end Sale’s day.

Astros starter Framber Valdez (1-0) kept the Boston bats at bay before giving up a seventh-inning run. The left-hander allowed just the one run on three hits and one walk while striking over five in eight innings.

Houston’s starters had allowed 16 runs (14 earned) in a combined 6 2/3 innings over the first four games of the series.

Yuli Gurriel went 3-for-5 with three RBIs, Jose Siri knocked in two runs and Michael Brantley added two hits and an RBI for the Astros.

Houston will look to close out the best-of-seven series as it shifts back to Texas for Game 6 on Friday night. Game 7, if necessary, would be played Saturday.

Rafael Devers had a solo homer and a single for the Red Sox. It was the eighth career postseason home run for the 24-year-old third baseman, who tied Mickey Mantle, Albert Pujols and Houston’s Carlos Correa for the most ever before turning 25.

After totaling five hits in a 9-2 loss in Game 4 Tuesday, the Red Sox finished with just three on Wednesday. Boston racked up 22 hits and outscored Houston 21-8 while winning Games 2 and 3 after the Astros’ 5-4 victory to open the series.

Sale fell to 1-3 in his postseason career after allowing four runs (two earned) on three hits with two walks and seven strikeouts in 5 1/3 innings.

Alvarez’s sixth-inning double made it 3-0 before Gurriel added an RBI double and Siri smacked a two-run single.

Brantley’s RBI single in the seventh made it 7-0 before Devers homered later in the inning. Gurriel’s two-out, two-run single in the ninth capped the scoring.