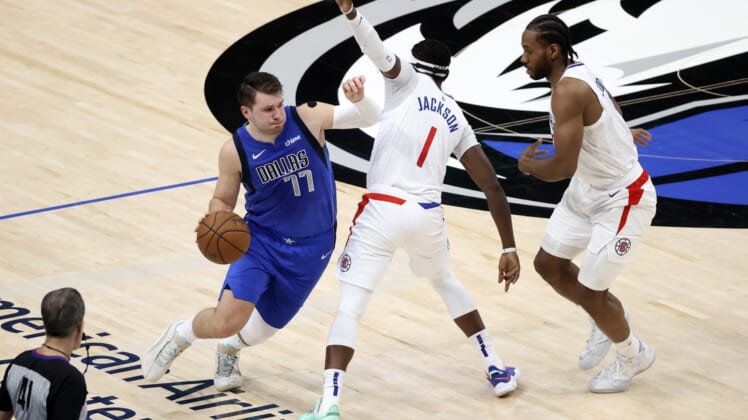 Kawhi Leonard scored 45 points and Reggie Jackson added 25 as the Los Angeles Clippers kept their season alive with a 104-97 victory over the host Dallas Mavericks on Friday to force a Game 7 in a first-round Western Conference playoff series.

Paul George scored 20 points with 13 rebounds as the Clippers rallied from a seven-point deficit in the third quarter, while also shaking off a loss at home in Game 5 to even the series 3-3.

All six games in the series have been won by the road team for the first time in NBA playoff history.

Luka Doncic scored 29 points with 11 assists for the Mavericks, who will get their second chance to advance Sunday at Los Angeles. Tim Hardaway Jr. added 23 points for Dallas, which is trying to avenge a first-round defeat to the Clippers in last season’s playoffs.

Leonard stepped up in the Clippers’ elimination game, scoring a series-high. He went 18 of 25 from the field, also a high for shot attempts in the series, and was 5 of 9 from 3-point range.

Doncic was content to be more of a ball distributor, reaching double digits in assists in the third quarter. He had just 17 points with five minutes remaining after scoring 42 in Game 5.

With the Clippers up 90-88 and just over three minutes remaining, Leonard made a long jumper, followed by consecutive 3-pointers in a decisive stretch as Los Angeles went up 99-90 with 1:41 to play.

The Mavericks led 77-73 at the start of the fourth quarter before the Clippers jumped in front 90-85 with 5:03 remaining on a Nicolas Batum dunk. Doncic followed with a 3-pointer, his first of the game with 4:41 remaining, to get Dallas within one possession before Leonard took over.

The Clippers’ defense was a difference maker, holding the Mavericks to 41.6 percent shooting for the game and 29.2 percent (7 of 24) in the fourth quarter.

The Mavericks appeared to be on their way early, leading for the bulk of the first half, and by as many as nine midway through the second quarter. The Clippers went on a 6-0 run to end the period and take a 48-45 lead into the break.

The Clippers only received points from their starters in the first half, with Leonard (16) leading the way. Doncic had 15 at the break, going 5 of 11 from the field and 0 of 3 from 3-point range.