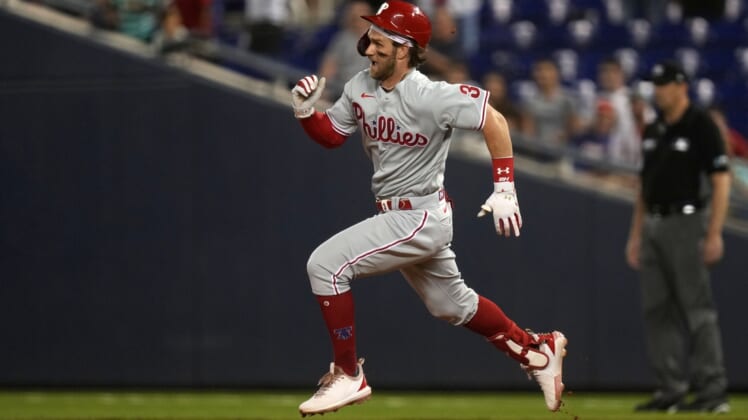 Bryce Harper went 3-for-5 with a home run and two RBIs as the Philadelphia Phillies defeated the host Miami Marlins 5-0 on Friday night.

Reliever-turned-starter Ranger Suarez (8-5) struck out a career-high nine batters to earn the win for the Phillies (82-78), who snapped a four-game losing streak and clinched a winning season.

Harper, a National League MVP candidate with 41 doubles, 35 homers and 84 RBIs, rolled his left ankle after smashing his double in the third inning. Harper had gone hitless in 13 consecutive at-bats before that hit.

Making his 70th consecutive start, Harper received medical attention but remained in the game and then homered in the fifth inning. He finished a triple short of a cycle.

Suarez pitched seven scoreless innings, lowering his ERA to an impressive 1.36. He allowed six hits — all singles — and one walk.

Marlins starter Sandy Alcantara (9-15) took the loss. In five innings, he allowed five hits, one walk and four runs, striking out six. The 15 losses are a career worst for Alcantara, who finished the year with 205 2/3 innings pitched and 201 strikeouts.

Only four other pitchers in Marlins history have had 200/200 seasons – A.J. Burnett, Ryan Dempster, Kevin Brown and Al Leiter.

Alcantara, though, got in trouble in the third when he hit the first two batters.

The Phillies cashed in with Odubel Herrera’s RBI single, Harper’s RBI double and Didi Gregorius’ sacrifice fly that missed being a grand slam by a couple of feet.

Miami had runners on the corners with no outs in the fourth, but Suarez escaped by striking out Magneuris Sierra and getting Deven Marrero to bounce into a double play.

Harper’s homer in the fifth gave the Phillies a 4-0 lead, and Matt Vierling added a solo shot in the ninth to close the scoring.

Philadelphia got one inning of scoreless relief from Hector Neris and from Ian Kennedy.