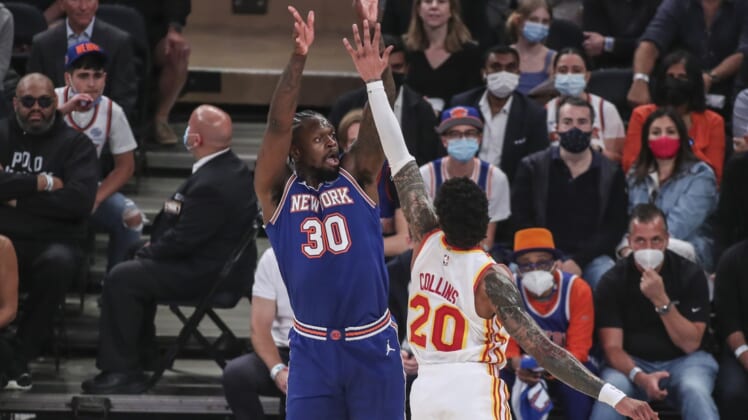 Trae Young continued his breakout postseason Wednesday night, scoring 18 of his game-high 36 points in the fourth quarter as the visiting Atlanta Hawks eliminated the New York Knicks with a 103-89 win in Game 5 of their Eastern Conference quarterfinals.

The fifth-seeded Hawks, who won the final three games by a combined 42 points to clinch their first series since 2016, will face the top-seeded Philadelphia 76ers in the conference semifinals. The series begins Sunday.

The 30-point game was the third of the series for Young, who averaged 29.2 points per game.

Clint Capela (14 points, 15 rebounds) had a double-double for the Hawks while De’Andre Hunter scored 15 points and John Collins added 13.

Julius Randle (23 points, 13 rebounds) posted a double-double as a resurgent season came to a close for the fourth-seeded Knicks, who made the playoffs for the first time since 2013. RJ Barrett scored 17 points, Reggie Bullock and Alec Burks had 12 points each, and Immanuel Quickley added 11.

The final game featured the feistiness that defined the series between the budding rivals. Knicks power forward Taj Gibson was whistled for a flagrant foul on Hunter late in the second before a skirmish between the teams just after the first-half buzzer resulted in three technicals being issued.

Randle collected the rebound of a miss by Young and tossed the ball at Young. New York center Nerlens Noel bumped shoulders with Young as the teams walked off the court before forward Solomon Hill bumped into Noel, resulting in the pair going nose-to-nose.

Bogdan Bogdanovic scored five points in a 9-0 run that gave the Hawks their first double-digit lead at 62-50 in the third. The Knicks pulled within nine points a handful of times, the last on a Randle reverse layup with 3:45 remaining, but Atlanta scored the next seven points to go ahead 74-58.

Young almost single-handedly removed any doubt by scoring all but one point in an 8-1 run that gave the Hawks an 87-71 lead with 7:12 left in the game. Atlanta twice led by as many as 19.