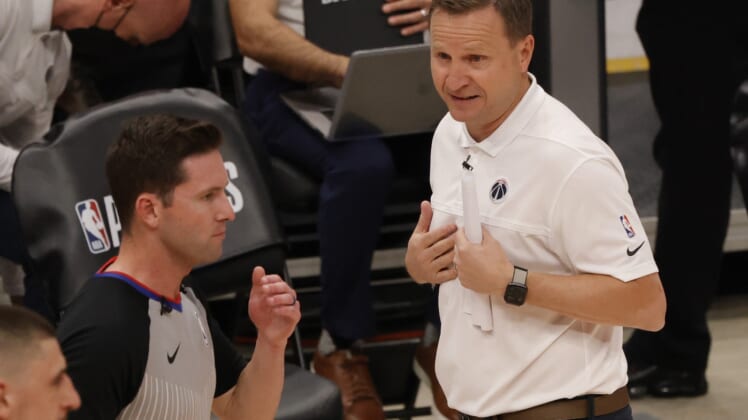 May 29, 2021; Washington, District of Columbia, USA; Washington Wizards head coach Scott Brooks talks to referee Ben Taylor (46) against the Philadelphia 76ers in the first quarter during game three in the first round of the 2021 NBA Playoffs at Capital One Arena. Mandatory Credit: Geoff Burke-USA TODAY Sports

The Washington Wizards won’t be bringing back Scott Brooks as head coach next season after the two sides failed to agree to terms on a new contract.

In five seasons with the Wizards, Brooks got them to the playoffs three times, but past the first round only once. He posted a 183-207 regular-season mark, and had losing records in each of his last three seasons.

Even though Brooks’ contract expired following the NBA playoffs, he did well to rally the Wizards from a rough start to the first round, as they needed a win in the play-in tournament to lock up the East’s No. 8 seed.

Brooks was reunited with his former Oklahoma City Thunder superstar Russell Westbrook in the nation’s capital, and given that, it’s a little surprising Washington couldn’t find a way to keep the coach around.

It’ll be interesting to see how Brooks’ departure impacts Westbrook’s future. He has a player option built into his contract for the 2022 NBA offseason, so the Wizards may be keen to trade the veteran floor general before then to ensure that they get compensation.

Between Westbrook and Bradley Beal — who also has a player option for the 2022-23 season — Washington has one of the better backcourts in the league. That’ll make Washington’s job an attractive one for candidates to be Brooks’ successor, provided that dynamic duo stays together. 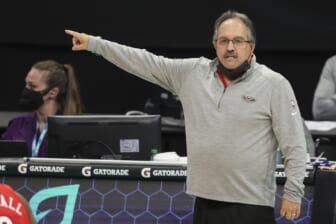