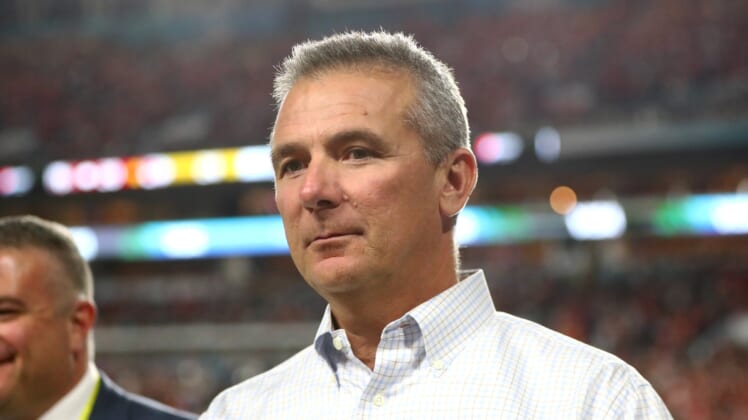 Former Ohio State head coach Urban Meyer isn’t on board with college football conferences canceling their seasons this fall with a spring campaign in mind.

On Tuesday, two major conferences — the Pac-12 and Big Ten — announced they are canceling fall sports, including college football. The MAC and Mountain West conferences did the same. All of them have expressed hope that it’s possible to play in the spring.

Urban Meyer: ‘No chance’ college football in the spring will work

Appearing in an interview with the Big Ten Network, Meyer laid down an argument for why a spring college football season has “no chance” of being played.

“No chance,” Meyer, an assistant athletics director at Ohio State and FOX Sports college football analyst, said, via 247sports.com. “You can’t ask a player to play two seasons in a calendar year. When I first heard that, I said that. I don’t see that happening, when I hear that. The body, in my very strong opinion, is not made to play two seasons within a calendar year. That’s 2,000 repetitive reps and football’s a physical, tough sport. So I don’t, really don’t, see that happening.”

That’s a valid point. Players can only take so much physical pounding before their bodies break down.

Meyer also pointed to why players at big schools go there in the first place: To pursue their NFL dream.

“We recruited players at Ohio State that have a chance to earn a living and play the game and be rewarded for their great efforts, and you’re going to ask them to play spring football — by the way — and then go miss OTAs and not prepare for a dream to go play in a professional football?” Meyer said. “That’s not fair.”

The NFL may be able to accommodate a spring college football season, however.

2021 NFL Draft could be pushed to June

Back in July when whispers were emerging that college football in 2020 could be on the brink of collapsing, there was talk about how the 2021 NFL Draft may be moved to accommodate a spring season.

Based on the current CBA between the NFL and NFLPA, the NFL Draft can be pushed until no later than the first week of June. If the league wanted to push it back even further, that would have to be negotiated between the league and the players’ union. However, as we saw this summer with the COVID-19-related health and safety protocols that were agreed to, amendments can be successful.

Regardless, that type of action is possible. It would give impending NFL rookies more time to recover from their season before being thrust into a game that’s even faster and more physical than what they play at the collegiate level. Furthermore, it’s possible for the league to tweak the offseason to further accommodate players in this unique circumstance.