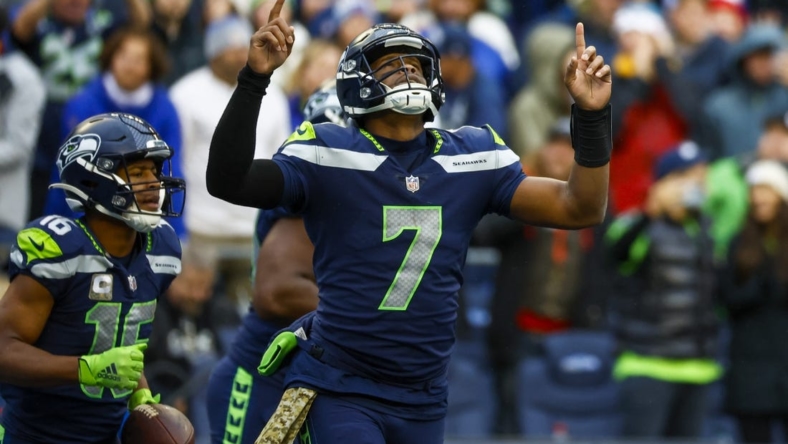 Tyler Lockett overcame a pair of rare miscues to catch the tiebreaking touchdown as the Seattle Seahawks defeated the visiting New York Giants 27-13 Sunday afternoon in the NFL’s lone matchup of the week between teams with winning records.

The veteran receiver hauled in a pass from Geno Smith down the right sideline and scored a 33-yard touchdown with 9:18 remaining to put Seattle ahead for good.

Smith was 23 of 34 for 212 yards and two touchdowns for the NFC West-leading Seahawks (5-3). Smith went 5 of 5 for 75 yards on the go-ahead drive. Lockett finished the game with five receptions for 63 yards.

The Giants (6-2) were limited to 225 yards of total offense by a Seattle defense that was ranked 29th in total yardage. Daniel Jones was 17-of-31 passing for 176 yards and was sacked five times. Saquon Barkley gained just 53 yards on 20 carries.

Lockett lost a fumble at Seattle’s own 2-yard line that led to New York’s lone touchdown — a 1-yard run by Barkley with 5:51 left in the first half that tied the score at 7-7.

Lockett also had a potential touchdown reception late in the third quarter fall to the turf after the ball grazed his facemask. Lockett was charged with his first dropped pass of the season.

The Seahawks benefited from a pair of fumbles by New York punt returner Richie James, which led to 10 points.

The latter, with 6:04 remaining, gave Seattle the ball at the Giants’ 32-yard line. Smith hit tight end Noah Fant for 16 yards, then Kenneth Walker III scored on a 16-yard run to give Seattle a two-possession lead. Walker rushed 18 times for 51 yards.

After a scoreless first quarter, the Seahawks took the lead as Smith threw a 3-yard touchdown pass to DK Metcalf with 12:07 left in the half to cap a 15-play, 69-yard drive.

After the Giants tied it, James’ first fumble led to Jason Myers’ 35-yard field goal with 1:38 left to give the Seahawks a 10-7 lead at the intermission.

New York opened the second half with a 14-play, 79-yard drive that took 8:56 off the clock. But the Giants stalled in the red zone and had to settle for Graham Gano’s 31-yard field goal to tie the score at 10-10.

The teams traded field goals — a 51-yarder by Myers and a 31-yarder by Gano — before Lockett’s go-ahead score.