Trouble already brewing between Kawhi Leonard and the Raptors? 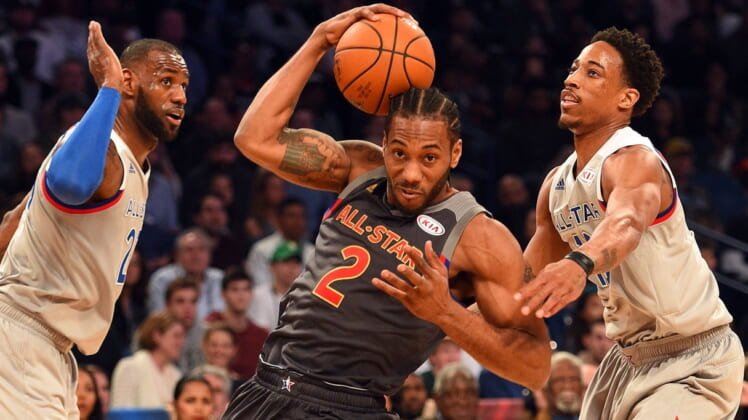 Just over a week after he got his wish and was dealt by the San Antonio Spurs, it doesn’t seem like new Toronto Raptors star Kawhi Leonard is done with causing off-season drama.

In speaking to reporters on Friday, Leonard had a pretty interesting reaction when asked if he’s spoken to new teammate, All-Star guard Kyle Lowry.

“I don’t know,” Leonard said. Once the reporter doubled down with the question, Leonard failed to provide anything more of substance.

For his part, Lowry pretty much indicated that he’s unhappy with the deal that sent Leonard to Toronto for DeMar DeRozan and change.

Lowry, told that people might read into his silence and assume he's not happy about the trade, asked if that would be an accurate assessment: "USAB has been fun. Good one."

We’re really not too sure what to make of this. DeRozan and Lowry were tight. Less than 10 days after trading his former backcourt mate for Leonard, it appears Lowry’s new running partner has not yet communicated with him.

They’re both in Las Vegas for Team USA training camp, which makes everything even more weird.

Having played in just a couple handfuls of games last season due to a quad injury, Leonard is entering his contract season. And in reality, this could be a very short tenure in Canada for the All-NBA performer.