Top takeaways from the 2018 Pro Bowl 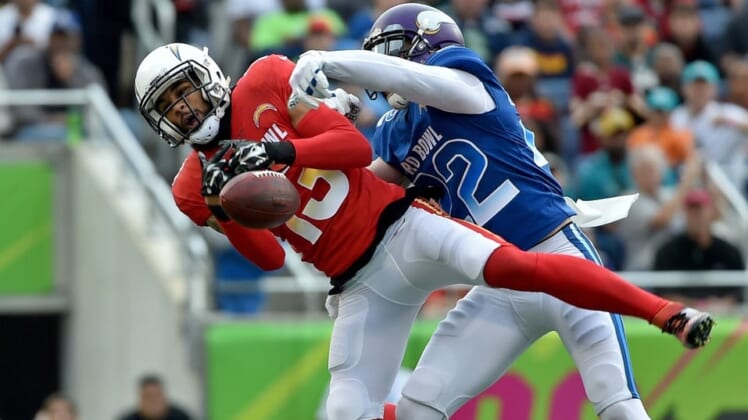 As the Patriots and Eagles headed to Minnesota for Super Bowl LII on Sunday, the rest of the NFL’s best were seen in Orlando for the 2018 Pro Bowl.

This game has lost a lot of popularity in the past. Top players continue to skip the exhibition game altogether. Tackling and defense had in the past been amateurish. And in reality, the Pro Bowl was becoming more of a running joke than anything else.

That didn’t change in Florida on Sunday. With an exception of a certain Tampa Bay Buccaneers linebacker, this looked more like a two-hand touch game. Though, another defender made one brilliant play, showing everyone that he should have been in the game from the get.

It took Landon Collins to suffer an injury for Smith to actually earn a trip to the game in Orlando this season. That’s just all sorts of ridiculous, especially considering Pro Football Focus graded the safety out as the best player in the league this past regular season.

Like clockwork, Smith made his presence known in a big way against the AFC on Sunday. He picked off a long Ben Roethlisberger pass and returned it 79 yards to the house for a touchdown.

It really was a thing of beauty. Maybe, it’s time to actually start voting the best players into the exhibition game, not just the most-popular players.

One hit causes a major stir 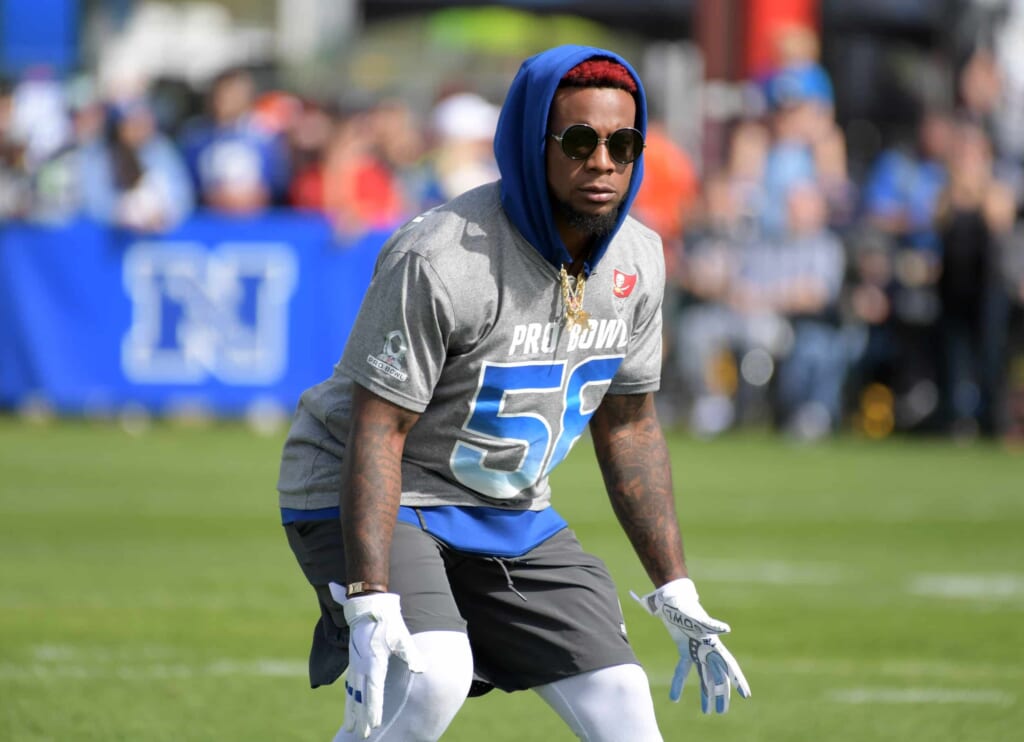 Tampa Bay Buccaneers linebacker Kwon Alexander is just 23 years old and playing in his first Pro Bowl. Can we blame him for being a tad excited? In the first quarter on Sunday, Alexander laid this hit on Colts tight end Jack Doyle. The reactions from those broadcasting the game were priceless. “Maybe he doesn’t know the rules,” we paraphrase ESPN’s Sean McDonough of saying.

It’s football. He made a football hit. And people are out here are acting like Alexander went all Edward Norton on American History X. Get over it, guys. Jeez.

Prior to the Pro Bowl, Tennessee Titans tight end Delanie Walker was wearing dozens of pictures of himself on his cleats. Yeah, the ego was strong with this one.

Then, when the game itself kicked off, he backed it up on the field. Here, Walker catches a touchdown pass from his former San Francisco 49ers teammate, Alex Smith.

It was a reminder of the good old days in the Bay Area. Continuing with that Bay Area theme, Walker then made each of his AFC teammates $32,000 richer by grabbing the game-winning 18-yard touchdown pass from Derek Carr with 1:31 left in the fourth quarter.

It came with the AFC down by six points. And it was an absolute thing of beauty from the veteran tight end.

AFC takes their first lead of the game! #ProBowl

We’re cool with the ego, especially if you can back up the talk on the field. That’s exactly what Walker did in helping the AFC come out on top Sunday.

If you decided to skip the Pro Bowl altogether, you likely didn’t see just how horrible the weather was in Orlando. And we’re here to analyze just how important of a role it played in this drama-filled game. Okay, maybe not.

But it did play a cruel joke on a Central Florida football team that considers itself national champs and was being honored as such prior to the game.

Rain or shine, the Champs are in the ?!

Not to rain on your parade, Knights. But Alabama won the national championship with a victory over Georgia in the actual National Championship Game. Pun game strong.

At one point in the first quarter, six members of the Steelers’ offense were on the field together. That specific possession ended with a seventh member of the squad, kicker Chris Boswell, nailing a field goal. It’s the only points the AFC would score with Ben Roethlisberger under center.

This is what’s wrong with the actual Pro Bowl. Pittsburgh didn’t even make it to the AFC Championship Game after falling to the Jacksonville Jaguars in the division playoffs. But with Steelers head coach Mike Tomlin manning the sideline, this team was represented more than any other around the league.

The Pro Bowl is supposed to be the top players in the game. Alas, that has not been the case for some time now. Instead, players from the two-best teams in the league made their way to Minnesota for the Super Bowl while also-rans found themselves playing in this annual dog-and-pony show. 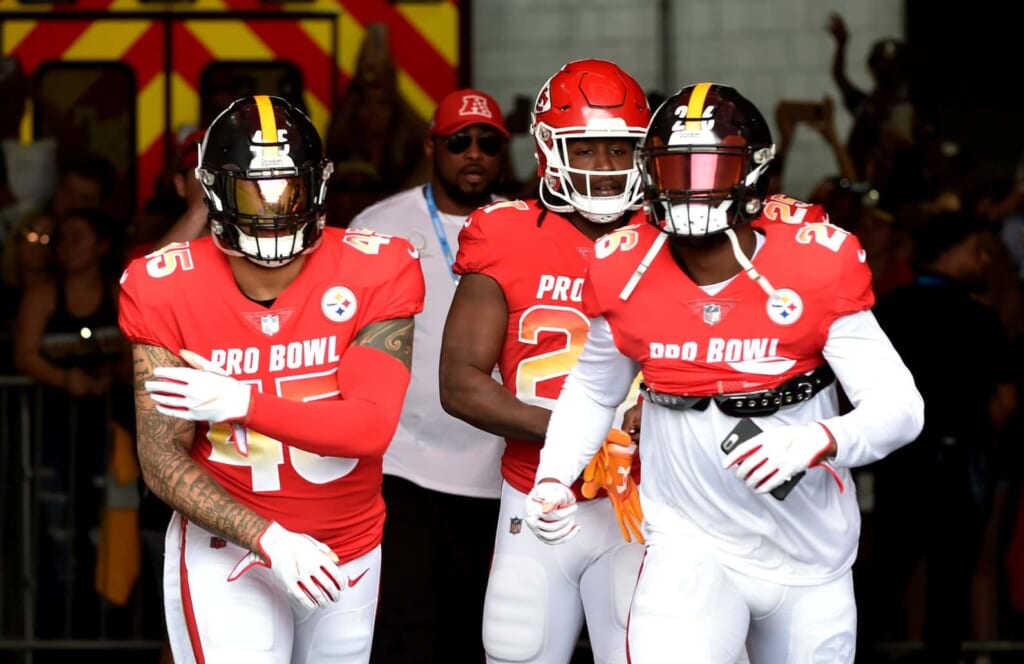 The game’s best running backs did in fact take part in Sunday’s Pro Bowl. By take part, we mean they suited up and played. Though, they were nowhere near a focal point of the game itself.

It’s all about the quarterbacks. That’s obvious. And in a meaningless exhibition game, coaches on both sides made sure we knew this. Now, one has to wonder if this will play into Le’Veon Bell’s contract negotiations (okay, maybe not). But he did run the ball only three times in a game Mike Tomlin was calling the shots. Sheer disrespect.

Why even play the game?

It’s the same point we make every single year. If the players are not going to take this meaningless exhibition seriously, why should fans pay attention? Even though this has been a drawn out narrative, it came back in a big time on Sunday.

We focused on the lack of touches for running backs. Sure we can blame Tomlin as well as NFC head coach Sean Payton for this. But it was more about the officiating. Once defenders got two hands on the running backs, the play was called dead. We’re not even kidding, people.

?? @JuiceCheck44 converts on 4th down to help set up the NFC's opening TD.

Watch the #ProBowl on ESPN ? pic.twitter.com/8Zj37utiIC

What’s the point of all this? Sunday’s game took place in the rain, which could have potentially led to serious injuries for some of NFL’s best players. In the meantime, not a single player on the field seemingly took the game seriously. It’s time for the NFL to come up with a new plan.

Maybe a skills competition. Heck, a real two-hand touch game might make sense. Let’s stop pretending this is worth three-plus hours on a Sunday afternoon. Signed, someone who spent three-plus hours watching the game.