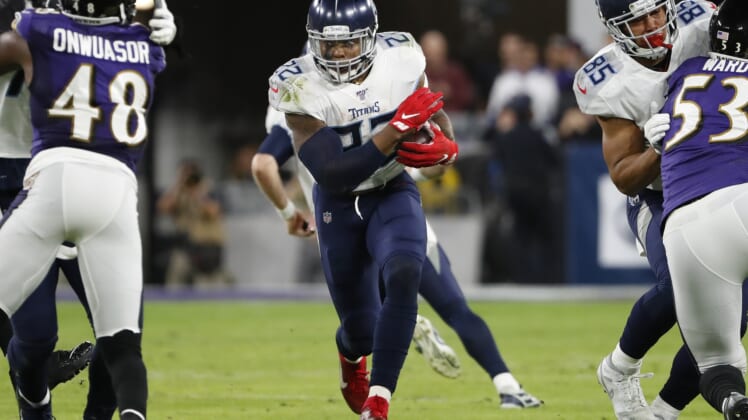 The NFL Divisional Playoffs got going at Levi’s Stadium in Santa Clara on Saturday afternoon.

A game that started out competitive saw the top-seeded San Francisco 49ers absolutely manhandle a lesser Minnesota Vikings team by the score of 27-10. The game was not as close as the final score indicated.

Later in the day, the Tennessee Titans shockingly defeated the top-seeded Baltimore Ravens on the road. It was a brilliant performance from Derrick Henry and Co.

Here’s a look at the top takeaways from Sunday’s NFL Divisional Playoff action with the 49ers and Titans punching their tickets to the championship round.

No one saw Saturday night’s result at M&T Bank Stadium in Baltimore coming. Second-year quarterback Lamar Jackson is the overwhelming MVP favorite. He broke record after record during a brilliant regular-season showing.

Almost immediately, Jackson’s youth and lack of experience came out in droves. This included a horribly thrown ball that resulted in an interception and more Titans momentum.

Jackson was outplayed by Ryan Tannehill. He ultimately completed 31-of-59 passes for 365 yards with a touchdown and two interceptions in the 28-12 loss. Now 0-2 as a starter in the playoffs, Jackson has yet to prove he’s ready for prime time.

Absolutely dominant. That’s the best way to describe what we saw from the 49ers’ league-best defense Saturday afternoon against Minnesota. Rising defensive coordinator Robert Saleh drew up one heck of a game plan, and the players used said game plan to eliminate the Vikings.

Nick Bosa recorded two sacks. Richard Sherman had a game-changing interception in the third quarter. Meanwhile, the 49ers got to Kirk Cousins for six sacks in a downright frightening performance. What exactly did we learn here? San Francisco’s defense is championship caliber. It’s that simple.

Derrick Henry is on one

This former Heisman winner was a one-man show for the Titans in their shocking AFC Wildcard win over the New England Patriots last week, going for 204 total yards in a brilliant performance. All said, Henry entered Saturday’s game having racked up 393 rushing yards over the past two outings.

He was up to his old tricks against an elite-level Ravens run defense. Including this 66-yard run, Henry put up a resounding 195 yards on 30 rush attempts in yet another eye-opening outing. The way he’s running right now, Tennessee has to feel confident in its ability to win the AFC next week. That’s how good the running back has been.

More than anything, Minnesota’s offensive line did not hold up in front of Cousins. He also failed getting the ball down the field throughout the game. It has to be crushing for the Vikes after they defeated the Saints last week. And it’s going to lead to more questions heading into the offseason.

What an amazing job Mike Vrabel has done

Two consecutive 9-7 seasons to open his career as a head coach. It’s not that Vrabel’s Titans were running over opponents heading into the playoffs. But for some reason, that has changed big time in January.

It really is something to behold. Tennessee started the regular season with a 2-4 record before benching Marcus Mariota for Ryan Tannehill. It had to be a hard decision for Vrabel, especially given that Mariota is a fan favorite in Nashville.

The end result has been a 9-3 record since Tannehill took over. And we have to give Vrabel all the credit in the world. While Coach of the Year will likely go to Kyle Shanahan, Vrabel deserves to be mentioned as a top-end candidate.

Jimmy Garoppolo needs to be better

After completing 5-of-6 passes in the 49ers’ game-opening touchdown drive, Garoppolo struggled big time in front of the home crowd Saturday afternoon. The game culminated in him completing just six of his final 13 passes for less than 80 yards after that drive.

San Francisco was able to ride a dominant defense to a blowout win. However, Garoppolo simply must play better if this team is going to reach its ultimate goal of hoisting the Lombardi in Miami come February. This interception late in the second quarter on Saturday is a prime example of what Garoppolo can’t do if he’s going to lead San Francisco to the title.

Titans passing game will have to step up

As much credit as we give Mike Vrabel for his coaching job, we have to point out a lack of a real passing game in Tennessee as the team heads to the AFC Championship Game. Ryan Tannehill put up just 67 net passing yards in the team’s wild-card win over the New England Patriots last week.

Tough sledding for Seahawks or Packers

Saturday’s blowout win for the 49ers can’t be considered great news for the winner of the other NFC Divisional Playoff game between he Packers and Seahawks. Simply put, whoever comes out on top is going to be in for a rude awakening next Sunday.

San Francisco is rested. Its defense returned to the dominant form we saw earlier in the season. The 49ers will have an extra day of rest and be able to hang out in Northern California. Meanwhile, the winner of Sunday afternoon’s game will have to travel clear across the country on a short week. Things are set up swell for San Francisco to continue running roughshod through the NFC Playoffs.