A handful of games have already wet our whistles for the coming college football season, which begins in earnest in Week 1 starting with a loaded slate on Thursday.

Thanks to the NFL schedule being one week behind, fans will be treated to prime-time games on Sunday and Monday night, along with the typical full schedule on Friday and Saturday.

It’s going to be a glorious five-day smorgasbord of college football, so get ready to settle in and feast to your heart’s content.

A new era dawns at UCF

Now that Scott Frost is settling in at Nebraska, a new era begins in earnest with Josh Heupel at the helm for UCF. He now has to somehow figure out a way to not disappoint a fan base that experienced an undefeated campaign a year ago. Thankfully Heupel, who was the offensive coordinator at Missouri before being hired on at UCF, knows how to generate offense. Even better, he has McKenzie Milton, 2017 lead rusher Adrian Killins Jr. and a bunch of other exciting offensive weapons at his disposal. The big key will be whether the Knights can bring the heat defensively. Heupel and the Knights get their season started on Thursday night on the road against Connecticut.

Time for Brian Lewerke to take the next step for MSU

There’s been a lot of chatter about how Brian Lewerke is a dark-horse Heisman candidate this year, and about how the Spartans are poised to build off last year’s surprising success. We’re about to see if both of those ideas have any juice behind them, as the Utah State Aggies, who featured a top-20 pass defense last year, are coming to town on Friday. Lewerke was rock solid last year. He has big-time help up front with an experienced offensive line, and with LJ Scott coming back for another campaign. Now it’s time for the redshirt junior to take the next step in his development by showing he can be dominant in the face of a tough opponent.

Realistically, Bryce Love should open the season with a strong game at home against San Diego State. After all, the only thing that even remotely slowed this young man down last year was an injury, and he went over 100 yards rushing in all but one of his games played in 2017. The Aztecs could be tougher to bully than people think, however. They ranked 33rd in rushing defense last year, holding opponents to just 3.76 yards per carry. This will be a nice early test for Love, who is one of the big favorites to win the Heisman Trophy this year.

Saturday’s game at home against Oregon State should be nothing more than a walk in the park for the Buckeyes. Yet the elephant in the room is the still-fresh Zach Smith scandal that has shamed the entire program and has resulted in Urban Meyer being suspended the first three games of the season. In the lead up to this first game, Meyer can’t be involved in practice or preparation whatsoever. So it’s up to offensive coordinator Ryan Day to guide this team through what must be a tumultuous time for the young players who have been caught up in something that’s much bigger than them.

FAU vs. Oklahoma could be most entertaining game of the week 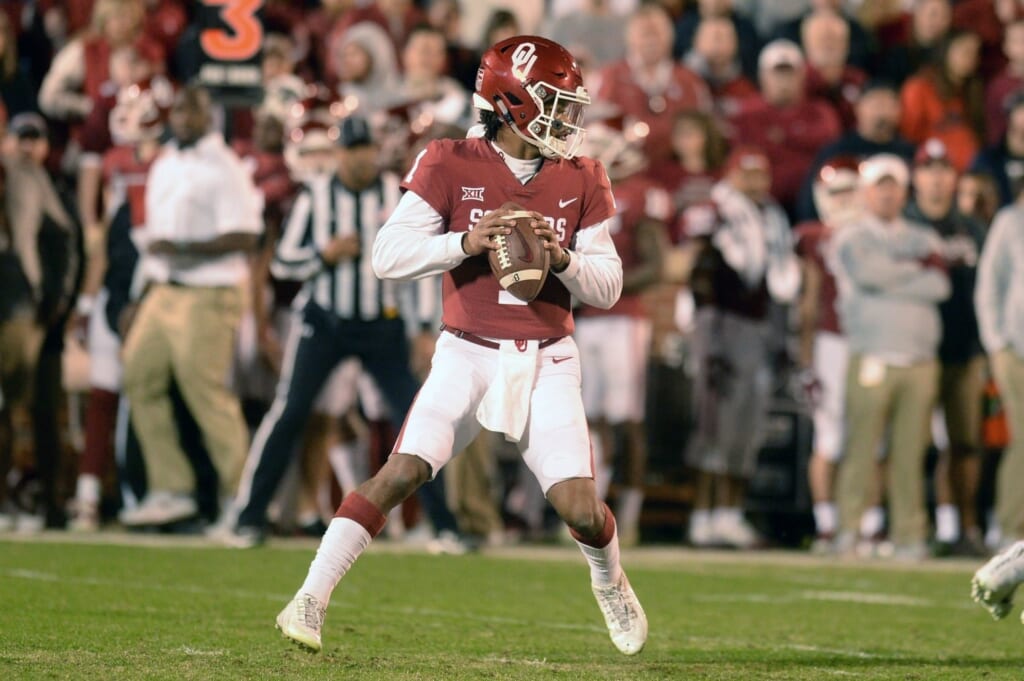 The early game Saturday on FOX between Florida Atlantic and Oklahoma should be a barn burner. There are huge national figures on both sides in this one. Lane Kiffin is the architect of one of the most prolific offenses from a year ago, and many of his top players are returning in 2018, starting with the always dangerous Devin Singletary. Then on the other side we have Lincoln Riley, who’s rolling with the uber talented Kyler Murray — a guy Kiffin profusely praised ahead of this game — under center. We should see plenty of scoring in this game, which is shaping up to be loads of fun.

Jonathan Taylor should feast for Badgers

If a running back other than Bryce Love is going to win the Heisman this year, chances are it’s going to be Jonathan Taylor. The sophomore nearly hit 2,000 yards on the ground last year and is poised for an even bigger 2018 campaign. The Badgers feature the best offensive line in the nation — bar none. And this Friday night they’re going up against Western Kentucky, which has little-to-no chance of slowing this train down. The only way we see Taylor’s production taking a hit whatsoever in this game is if head coach Paul Chryst pulls his star early due to a blowout.

There was a ton of hype surrounding Tom Herman last year when he took over for Charlie Strong at Texas. In the end, his first season guiding the Longhorns turned out to be somewhat disappointing, as the team finished one game over .500. The disappointment started early, too, with a stunning Week 1 loss to Maryland — a three-touchdown underdog. Now the Longhorns have a chance for some revenge with a rematch in Baltimore. It’s worth pointing out that national polls see Texas as a strong program this year. How this team performs on Saturday at FedExField will go a long way toward either substantiating that notion or dispelling it.

Huskies and Tigers under immense pressure out of the gate

One of the biggest games on the early schedule takes place Saturday in Atlanta when the Auburn Tigers host the Washington Huskies. Both teams have national championship aspirations and enter the season ranked in the top 10. Both programs feature elite weapons on both sides of the ball. Chances are, it’s going to likely be a slobber knocker of a contest as defensive prowess takes over, despite some very good quarterbacks in Jarrett Stidham and Jake Browning. Whichever team loses will have an uphill climb the rest of the season to remain within striking distance of the College Football Playoff. It’s going to come down to coaching and nerves, and both programs are equipped to handle the stress. Get your popcorn ready for this 3:30 p.m. ET showdown, which airs on ABC.

Can Will Grier pick up where he left off last year?

One of the biggest disappointments of last year was that Will Grier didn’t get to finish his season. A gruesome finger injury suffered in November derailed his stellar season, which consisted of 3,490 yards and 34 touchdowns through the air. West Virginia opens up the season against Tennessee, which is now being lead by former Alabama defensive coordinator Jeremy Pruitt. It’s going to be interesting to see if Pruitt has enough talent to execute his vision this year. And whether Grier can pick up where he left off last year with a huge game against Pruitt’s defense. Of course, having his partner in crime, David Stills V, along for the ride doesn’t hurt his chances.

The Trojans have been treated to some outstanding quarterback play the past couple of years. Now that Sam Darnold is quarterbacking for the New York Jets, the program is going very young, starting true freshman JT Daniels under center to open the season against UNLV at home. He’s just the second true freshman to ever start the season under center for the Trojans, the first being Matt Barkley back in 2009. This first game should be a confidence-building experience for Daniels, as the Rebels don’t provide much of a test. The former five-star prospect from Mater Dei High in Santa Ana (Calif.) was the No. 2 pro-style quarterback and No. 2 overall player in California, per 247Sports’ Composite rankings. Needless to say, there are some big expectations for Daniels right out of the gate.

Chip Kelly is back, but how good will the Bruins be?

Before he tried his hand at coaching in the NFL, Chip Kelly was one of the best coaches in college football. He built the Oregon Ducks into a powerhouse, which was predicated on his ability to spin out amazing offenses that spread the field and stress defenses. Now he’s back in college coaching the UCLA Bruins, but nobody honestly has an idea about what to expect from this team in 2018. The past couple of seasons, UCLA has been pretty well propped up by Josh Rosen, who went No. 10 overall in the 2018 NFL Draft. Now he’s gone and the Bruins are, it seems, starting from scratch with only eight seniors on the roster and more questions than answers at many key positions. Thankfully, this first game against Cincinnati at home should help the Kelly era begin on a positive note.

National title aspirations on the line for Michigan and Notre Dame

Two of the most talked-about programs in the nation are squaring up for an epic battle Saturday evening when the Notre Dame Fighting Irish host the Michigan Wolverines. Brian Kelly and Jim Harbaugh both are facing some intense pressure to succeed this year, and both teams will be followed closely on a national level all year long. Michigan features one of the best defensive fronts in the nation and will be a huge test for Brandon Wimbush and Co. On the other side Ole Miss transfer Shea Patterson is the man Harbaugh is pinning his hopes on after sub-par quarterback play has been the hallmark of the offense the past couple of seasons. We cannot wait for this game, which will set one team up nicely early on while putting the squeeze on the loser.

Can Bobby Petrino back up his big talk against ‘Bama?

It’s never a great idea to kick the bear. Yet that’s exactly what Louisville head coach Bobby Petrino has done ahead of his Week 1 matchup against Nick Saban’s Alabama Crimson Tide. He recently predicted the Cardinals are going to beat ‘Bama, which made national headlines. We’re not holding our breath. Despite a rash of injuries, the Crimson Tide are still the prohibitive favorite to win the title this season. It’s going to take quite an amazing performance from Jawon Pass, who’s taking over for a legend in Lamar Jackson, to beat Alabama on Saturday in Orlando.

Early test for Miami at LSU 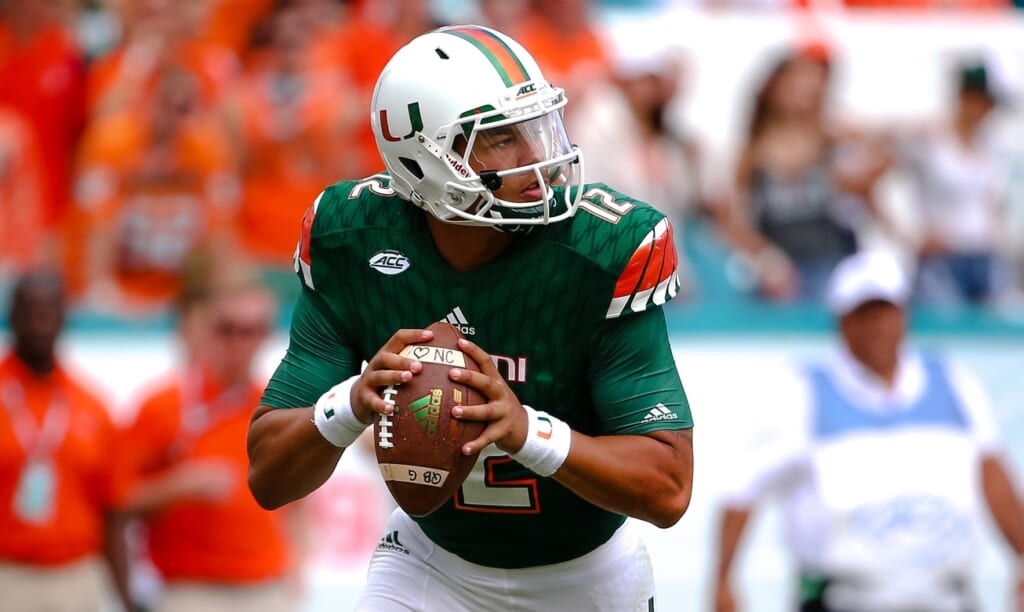 The only game on television Sunday night features two big-time teams in Miami and LSU. Mark Richt would seem to have the tools he needs to open the season with a win over Ed Orgeron’s squad. Especially considering the mess that is LSU’s quarterback situation — a mess that should lead to quite a bit of air time for the famed turnover chain. That being said, we’ll need to see some consistency out of Malik Rosier, too. He was a bit spotty last year but did have a penchant for coming through in the clutch. LSU’s defense should provide a big challenge, but in the end the Hurricanes should prevail.

After moving from the West Coast to helm one of the biggest programs in college football, Willie Taggart is about to experience a baptism by fire on Monday night. The Florida State Seminoles are hosting Virginia Tech, which featured one of the best defenses in the nation last year. Deondre Francois, who was lost for the season a year ago against ‘Bama, is back under center as the starting quarterback. If he can get back to playing the way he did before his injury, then the Seminoles should be in good shape. We also can’t discount the fact that Florida State’s defensive line could have a dominant game against a mediocre Virginia Tech offensive front. These two top-20 teams square off on ESPN, starting at 8 p.m. ET.