Top 5 most explosive NFL offenses in 2020 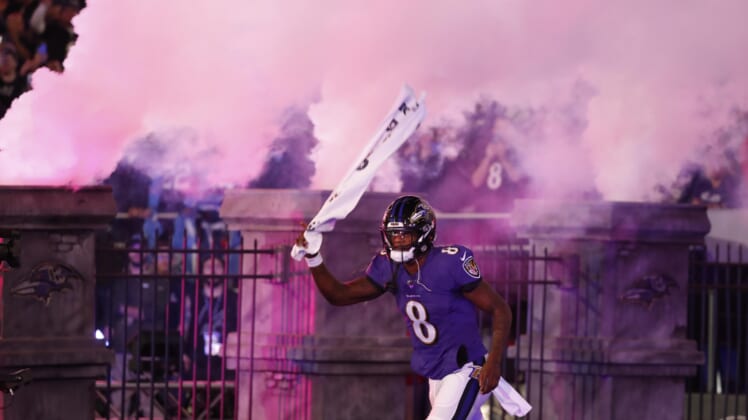 As NFL coaches with young quarterbacks dream up schemes to confound opposing defenses, fans are the biggest beneficiaries. Big plays. Touchdowns galore. Electric playmakers. The age of explosive NFL offenses is here, and the 2020 season is loaded with potential for even more.

We’re looking at the teams that will feature the top-five most explosive NFL offenses this coming season.

Jimmy Garoppolo doesn’t get enough love for the job he did last season in his first full season as the 49ers starter. He ranked third in the NFL averaging 8.4 yards per attempt. Additionally, San Francisco’s passing offense ranked first in the league in explosive passes, per Warren Sharp of sharpfootballstats, with 50 explosive plays in 422 attempts.

George Kittle is a major force in the passing game. He’s a run-after-the-catch (RAC) specialist who punishes defenders every chance he gets. Deebo Samuel is a similar player in a smaller package and is just getting started. Adding rookie Brandon Aiyuk out of Arizona State should supercharge this passing offense.

San Francisco’s run game is absolutely lethal. No matter who is lined up behind Garoppolo, the 49ers can rip off big plays on the ground and do so regularly. The 49ers led the league with 23 rushing scores last season and should once again be dominant in 2020.

The NFC South as a whole should be a ton of fun to watch this season. Don’t be surprised if three of the four teams end up sporting top-five offenses when it’s all said and done. The reason we’re highlighting the Bucs here is that this team has talent galore and will be led by the NFL’s G.O.A.T. in 2020.

Tom Brady is still capable of slinging it all around the yard. He never had the strongest arm, but he also never had any issues with arm strength. He will be playing with the best overall contingency of offensive talent this season he’s ever had in 20 years. Mike Evans is a star who is known for making huge plays downfield. Chris Godwin is an up-and-coming elite talent who averaged 15.5 yards per catch last season and scored nine touchdowns. Rob Gronkowski, if healthy, is the best pass-catching tight end in the league. Cameron Brate and O.J. Howard are also both capable of huge games and could thrive playing with Brady.

The run game may not be a huge strength. However, Ronald Jones II is dynamic in the open field and capable of ripping off touchdowns from anywhere. Throw in the exciting rookie Ke’Shawn Vaughn, and Tampa Bay might be better than you expect on the ground.

Personally, I cannot wait to see the Cowboys in action this coming season. First of all, the change at the top — Mike McCarthy replacing Jason Garrett as head coach — will be a huge development for the offense. He’s a legendary coach who should help quarterback Dak Prescott improve, and that’s a scary thought for the rest of the NFC.

Dallas also now has one of the best trios at wide receiver in the NFL. Amari Cooper is one of the best in the business. Michael Gallup is a big-play machine who is still just starting to tap into his potential. Now the ‘Boys can feature former Sooners star CeeDee Lamb, and that fact makes my head explode. Tight end Blake Jarwin is darn good, too.

Up front, Dallas’ offensive line is still one of the NFL’s best — even without star center Travis Frederick, who retired. With Ezekiel Elliott pounding the rock and taking screens to the house, this offense is absolutely loaded on every front.

Last year, it all started up front for the Ravens. Lamar Jackson had a phenomenal season passing the ball but it was all predicated on the run game. Jackson was a huge part of that. He smashed Michael Vick’s single-season record for most rushing yards by a quarterback — ripping off insane highlights (like this) on a weekly basis. Between him, Mark Ingram and Gus Edwards, this Ravens trio racked up a stunning 2,035 yards and 22 touchdowns on the ground.

Incredibly, Jackson also threw 36 touchdowns last year and averaged 7.8 yards per passing attempt on his way to the NFL’s second-ever unanimous MVP award. The biggest thing that has this scribe excited is that he’s said we should expect to see him passing much more in 2020.

Baltimore has done a great job surrounding Jackson with the talent needed to do just that, too. Marquise Brown is a budding star. Former Notre Dame star Miles Boykin has tremendous potential. Tight ends Mark Andrews and Hayden Hurst are both capable of making huge plays downfield. Adding rookie Devin Duvernay out of Texas should lead to even more explosive plays in the passing game.

What? You thought another team would be atop this list?

Patrick Mahomes is the best, most explosive pure passing quarterback to enter the league in many years. Blessed with extraordinary physical gifts, he’s only now starting to come to an understanding of how NFL defenses work. For a guy who already has an MVP trophy and Super Bowl ring under his belt, that’s a terrifying thought for anyone who’s not a Chiefs fan.

The Chiefs have, arguably, the most explosive receiving corps in the NFL. Tyreek Hill is lightning in a bottle. Mecole Hardman and Demarcus Robinson are both speed demons. Sammy Watkins can absolutely shred opposing defenses on a good day. Tight end Travis Kelce is the second-best overall tight end in the game and has four straight 1,000-plus-yard seasons.

As if the Chiefs weren’t dangerous enough, they went out and selected LSU running back Clyde Edwards-Helaire at the end of Round 1 this past April. CEH is incredibly potent, both on the ground and through the air. He roasted SEC defenses last year to the tune of 1,867 yards and 17 touchdowns from scrimmage.

With Andy Reid and offensive coordinator Eric Bienemy calling the shots, this offense is downright scary.