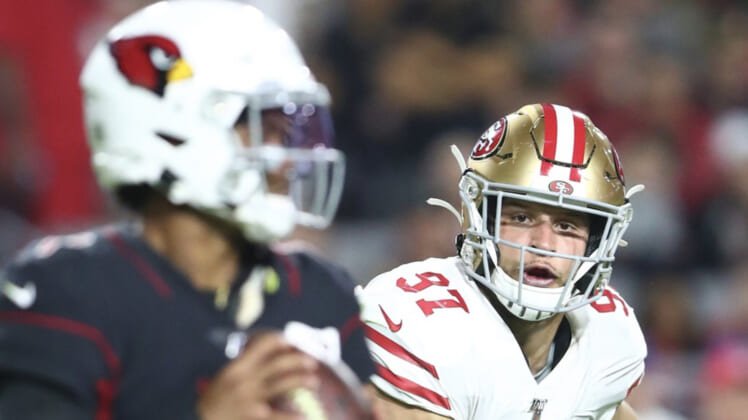 The 2019 NFL Draft class has been among the most impressive in recent history. For the first time in a while, the first two picks in said draft have lived up to expectations as rookies.

A bit further down on the pecking order, the Oakland Raiders received an absolute steal in running back Josh Jacobs while the Pittsburgh Steelers’ decision to trade up for linebacker Devin Bush has proven to be a major win.

It’s in this that we look at the top-10 NFL rookies heading into Week 13.

While the sack numbers have not been there over the past four games (one), Bosa continues to make an impact at nearly every turn. The No. 2 pick heads into Week 13’s huge matchup with the Baltimore Ravens ranked No. 1 among all NFL players in pass-rush productivity, via Pro Football Focus.

The Ohio State product is also on pace to record 23 quarterback hits, 20 tackles for loss and 12 sacks. He’s not only a Defensive Rookie of the Year favorite, Bosa is clearly in the NFL Defensive Player of the Year mix. That’s how good he’s been this season.

Let’s take the Cardinals’s 3-7-1 record out of the equation for a second here. We knew this team would struggle with a rookie quarterback and fellow first-year head coach. What we didn’t know is just how pro-ready Murray is.

The reigning Heisman winner heads into Week 13 on pace for 4,540 total yards to go with 25 touchdowns and just seven interceptions. In two games against the 49ers’ league-best pass defense, Murray has accounted for 447 total yards with five scores and zero picks. This dude is already absolutely legit.

Given the weaknesses up and down their roster, the Raiders received a lot of flack for selecting a running back in the first round this past April. Through 12 weeks, it’s proven to be an absolute find for the surprising 6-5 team.

Jacobs is in contention with Kyler Murray for Offensive Rookie of the Year honors. The former Alabama stud is currently on pace for north of 1,600 total yards and 10 touchdowns while averaging a robust 5.0 yards per touch. They might not be Saquon Barkley rookie numbers, but they have Jacobs as one of the best first-year players in the NFL.

We have to give Steelers general manager Kevin Colbert credit. He made a rare trade up into the top 10 to select a target player in Bush from Michigan. Colbert knew that the thumper fit Pittsburgh’s defense to a T. Through the first 11 games of the season, the longtime executive has been proven right.

Bush has recorded 79 tackles, five tackles for loss, four passes defended, four fumble recoveries and two interceptions in 11 games. He looks every bit the part of a star. Teaming Bush up with recent trade acquisition Minkah Fitzpatrick has given Pittsburgh a new attitude on defense. That’s no small thing.

Despite earning Defensive Player of the Year honors in the SEC last season, this Kentucky product flew under the radar heading into the draft. In fact, a lesser prospect in Clelin Ferrell was selected three picks before him. Jacksonville was more than happy to pounce on Allen at No. 7 overall, and he’s paid off out of the gate.

The pass rusher heads into Week 13 on pace for 23 quarterback hits, 13 tackles for loss, 12 sacks and three forced fumbles. Sure he’s a pass-rush specialist right now, but the trajectory is sky high for this athletic freak out on the edge.

Washington’s struggles at quarterback have not phased this rookie third-round pick. The Ohio State product has clearly proven himself to be the top rookie receiver in the NFL.

McLaurin has caught 40 passes for 638 yards and five touchdowns in 10 games this season. That’s despite the fact that he’s had the likes of Case Keenum, Colt McCoy and fellow rookie Dwayne Haskins tossing him the rock. Pretty impressive stuff.

Big play after big play. That’s what has defined Hollwyood’s first season in the NFL. The former Oklahoma standout has made sweet music with MVP favorite Lamar Jackson on the NFL’s highest-scoring offense.

Through the first nine games of his career, Brown has caught 35 passes for 519 yards and six touchdowns. He also boasts a solid 60.3% catch rate. The only question here is durability. Brown is seen as injury plagued and has already missed two games this season.

Much like the Raiders with Jacobs, New York received a lot of flack for using the first-round pick it acquired in the Odell Beckham Jr. trade on an interior defensive lineman. Though, it has worked out swimmingly for both sides.

Starting in all 11 games thus far as a rookie, Lawrence has been the best run-stuffing player on the Giants and is among the top players in that category in the NFL. He helps anchor a run defense that has surprisingly yielded less than four yards per rush on the season.

Not only did the Saints do well in replacing the recently-retired Max Unger at center, they received an absolute steal in McCoy in the second round of April’s draft.

According to Pro Football Focus, the former Texas A&M standout boasts a 99.0 pass-blocking grade on the season. He’s tied with Cowboys Pro Bowler Zack Martin for the highest grade in that category for a rookie since 2006. Sean Payton and Co. got themselves a good one here.

This rookie second-round pick has stepped up big time for the 10-1 49ers in recent weeks. The past three games have seen Samuel record 18 catches for nearly 300 yards with this insane touchdown against the Packers Sunday night. Samuel has also hauled in 78.3% of his passes during that span.

It couldn’t have come at a better time for the NFC’s best team with star pass catchers George Kittle and Emmanuel Sanders both dealing with injuries. Samuel is the real deal, and only promises to get better as the season nears its stretch run.