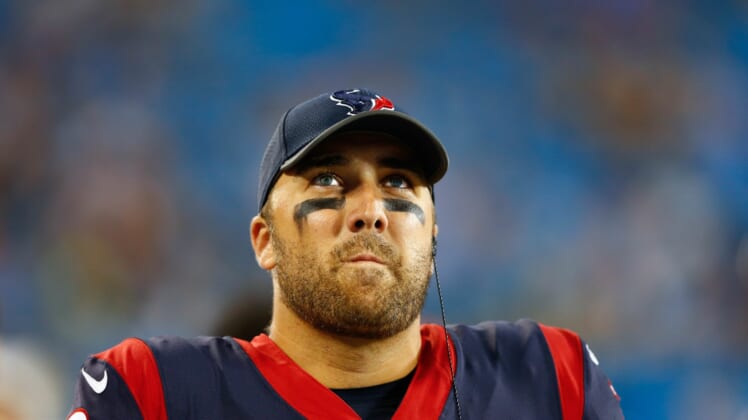 It didn’t take long for the Houston Texans offense to stall, and stall badly, with Tom Savage leading the charge behind center. Things got so bad early in the second quarter that Texans fans booed the offense off the field after its fourth third-and-out of the game. Then heading into the second half head coach Bill O’Brien finally had enough and pulled Savage in favor of the rookie, DeShaun Watson.

Tom Savage lasted one half; benched. DeShaun Watson going in.

Savage was very good for Houston during the preseason. He completed 75 percent of his passes, threw for 246 yards and a touchdown. The offense appeared to be in great shape. But playing well against vanilla defenses in the preseason is one thing. Doing it when teams are game planning against you is quite another.

Clearly, Savage and the offense was overwhelmed by Jacksonville’s defense while he played. Pressure was a big factor, as Savage was sacked six times. He also only completed 7-of-13 passes and lost two fumbles, one of which was returned 53 yards for a touchdown (watch here).

This is where playing Watson makes sense. His mobility and ability to stay cool under pressure are in large part why he was drafted No. 12 overall. He also has the big arm to make big plays, which Houston desperately needed in Week 1 down 19-0 when Savage was benched.

It’s going to be fascinating to see how O’Brien handles this situation going forward. Will he go back to Savage and hope his performance in Week 1 was nothing but a bump in the road? Or will he roll the dice and go the rest of the way with the rookie?