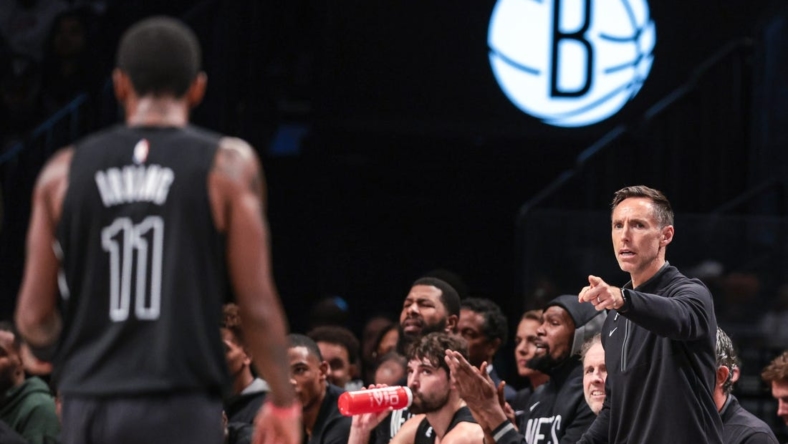 Kyrie Irving was not available to the media postgame on Monday night, but he remained the focus of the narrative around the 2022 Brooklyn Nets.

Irving had 28 points and the Nets won for the first time in five games, beating the Indiana Pacers in a bounceback performance that followed a loss coach Steve Nash dubbed a “disaster.”

Nash said Monday night that the Nets are hoping to grow from the recent controversy surrounding Irving.

“I just hope that we all go through this together,” Nash said. “There’s always an opportunity for us to grow and understand new perspectives. I think the organization is trying to take that stance where we can communicate through this. And try to all come out in a better position and both more understanding and more empathy for every side of this debate and situation.”

On Sunday night Irving deleted a link to the movie “Hebrews to Negroes: Wake Up Black America,” that he shared four days prior despite inclusion of antisemitic tropes. The film traces the theory that Jews claimed the religion and identity of the original Israelites, which prompted the enslavement of Africans then brought to America.

Irving hasn’t backpedaled since sharing the post, which was criticized by Nets’ ownership. When pressed on why he shared the film and supported its message on Saturday, Irving took a detour.

“My response would be it’s not about educating yourself on what Semitism is and what antisemitism is, it’s about learning the root words of where these come from and understanding this is an African heritage that is also belonging to the people. Africa is in it whether we want to dismiss it or not. So the claims of antisemitism and who are the chosen people of God and we go into these religious conversations and it’s a big no-no. I don’t live my life that way.

“I grew up in a melting pot of all races, white, Black, red, yellow, Jewish, Christian, Muslim and you see the way I live my life now. I’m not here to be divisive. I’m in a unique position to have a level of influence on my community and what I post doesn’t mean I support everything that is being said or being done or that I’m campaigning for anything. All I do is post things for my people in my community and those it’s actually going to impact. Anyone who has criticism, it obviously wasn’t meant for them.”

Nash said internal conversations are ongoing around the best course of action for the team and Irving to move forward.

“I haven’t been a part of those internal talks to be honest,” Nash said. “I’ve been just coaching, preparing the team, but I know that they’re working at that constantly.”

The Nets face the Chicago Bulls on Tuesday. The team did not commit to making Irving available postgame.