There’s a decent chance that the New England Patriots are going to be forced to trade former NFL Defensive Player of the Year Stephon Gilmore ahead of Week 1.

Gilmore, 30, is not happy about a contract that’s going to pay him a mere $7 million base salary in 2021. For good reason. Despite some struggles a season ago, he remains one of the top cornerbacks in the NFL. He’s just not being paid like it.

Gilmore took to Twitter on Tuesday to respond to a post from CBS Sports outlining the 10 highest-paid cornerbacks in the NFL. In response to the since-deleted tweet, Gilmore simply wrote, “Oh ok.”

Indeed, the New England Patriots are not doing themselves any favors by holding back as it relates to a potential Stephon Gilmore contract extension. To say he’s vastly underpaid compared to other top-end NFL cornerbacks would be an understatement.

Here’s a look at the 10 highest-paid cornerbacks in the NFL for the 2021 season based on base salaries. As you will see, Gilmore is underpaid.

At the very least, it’s not close to a stretch to conclude that Stephon Gilmore is a much better cornerback than both Bradley Roby and Trae Waynes, the latter of whom missed the entire 2020 season to injuries. 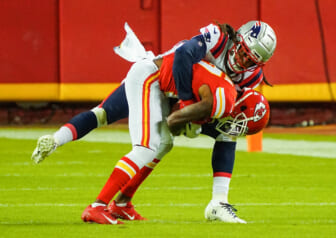 As you can see, Gilmore’s basic stats took a major hit in 2020 as he dealt with COVID-19 and other off-field factors. Even then, his advanced splits remain pretty darn elite.

According to Pro Football Focus, Stephon Gilmore boasts the third-highest grade among cornerbacks lined up on the outside since 2018 — behind only Jaire Alexander and Richard Sherman. There’s obviously a reason why he’s holding out and not happy with his current contract.