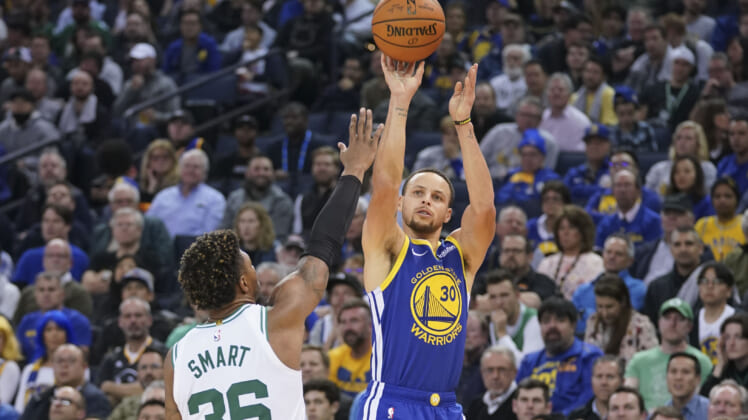 Stephen Curry and the Golden State Warriors entered Wednesday’s game against Marcus Smart’s Boston Celtics in the midst of a four-game winning streak and at near full strength for the first time all season.

We’re not 100% sure that’s going to be the case once said game comes to a conclusion. Star guard Stephen Curry was injured late in the second quarter. It came after both Curry and Smart scrambled for a loose ball. As you will see in the video, Smart rolled up on Curry’s leg.

For his part, Curry almost immediately headed to the locker room with what appeared to be a left foot injury.

Immediately after, Smart was called for a flagrant after a dirty play on Warriors guard Klay Thompson. The defensive-minded guard seemed to go full ninja on the play. It was about as ugly as it gets.

For his part, Warriors head coach Steve Kerr had words for Smart after the consecutive plays.

In a bout of frustration, Warriors forward Draymond Green was then called for a technical foul in just his second game back from injury.

It goes without saying that such an important nationally-televised game would draw the attention of those around the NBA. Pretty much everyone called Smart out for the two plays we showed below.

As for the Curry injury, we’ll have updates when they become available.