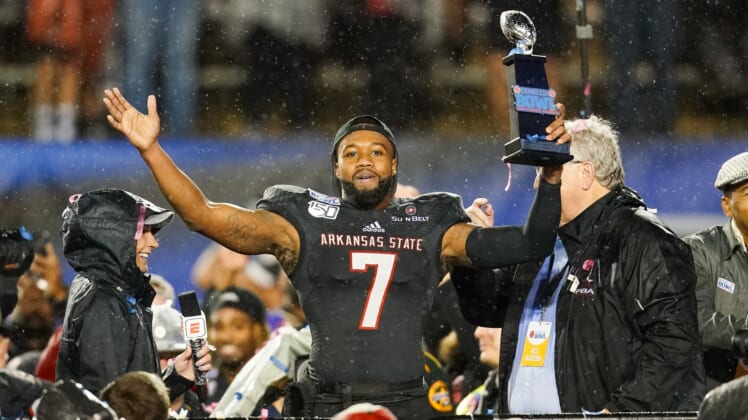 It’s every college football fan’s favorite time of year – bowl season. While the action kicked off earlier this week, the special season really began on Saturday with bowl games for fans to enjoy throughout the day.

The spotlight focused on the Mitsubishi Motors Las Vegas Bowl, a clash between the Washington Huskies (9-5) and No. 29-ranked Boise State Broncos (12-1). While it didn’t live up to the expectations, Saturday’s entire bowl schedule delivered some truly outstanding performances for football fans to enjoy.

Some of this season’s top stars capped off their senior year in style. Meanwhile, underclassmen put their talents on display and gave themselves confidence to build on this offseason.

At the beginning of the year, very few people in San Diego even knew Matthews was on the team. Just over a week after receiving his scholarship, the former walk-on receiver exploded in San Diego State’s dominant New Mexico Bowl win.

Central Michigan’s secondary couldn’t find a way to account for Matthews. The freshman hauled in his first collegiate touchdown on a 22-yard score in the first quarter. He then took the top of the Chippewas defense with a 74-yard touchdown to give the Aztecs a 20-3 lead. Matthews’ 111-yard, two-touchdowns performance is the perfect ending to his storybook season and he could become a star next year.

Carter gave the Aggies plenty to celebrate in the Celebration Bowl. The senior took the field for his final collegiate start, potentially his last football game too, and delivered with the performance of his life.

After North Carolina A&T’s offense started slow, the quarterback put on a fireworks show in the second quarter. He threw three touchdowns, including 53- and 59-yard strikes, to take a 24-10 lead. Carter kept firing in the third quarter with three more touchdown passes. A six-touchdown game and a bowl win, the perfect end to his football career.

While Liberty’s offense gave the team momentum early in the Cure Bowl, it needed someone to provide a spark on defense. It’s a role Lemonier thrived in throughout his career and he embraced it one final time on Saturday. The redshirt senior lived in Georgia Southern’s backfield and created havoc off of the edge with two crucial sacks. Lemonier earned MVP honors for his standout performance to end his career on the perfect note.

Who needs Lane Kiffin? Clearly, Robison and FAU’s offense don’t. The Owls took on Southern Methodist University in the Boca Raton Bowl and put on a show in front of the home fans.

Oh, did we mention Robison also played this game without his top three receivers? It didn’t seem to impact him. He moved this offense down the field with ease, connecting on 27-of-37 attempts for 305 yards with two touchdowns. No matter the circumstances, Robison can compete with the best of them and deliver big wins.

Maloney came into the Camellia Bowl as an underutilized weapon in the Golden Panthers’ offense. So, it came as a surprise to Arkansas State when he started torching the secondary on nearly every drive.

The 5-foot-11 receiver found holes all over the field. He hauled in a season-high 10 receptions (his previous high this season was five catches) for 178 yards and a touchdown. While Maloney didn’t end his time in college with a win, he finished it with the best game of his career.

There’s no better way for a player, whose senior year was defined by jaw-dropping performances, to end his final season with a standout performance and a bowl win. Of course, we didn’t expect anything different from one of the nation’s unheralded stars.

Bayless kicked things off early with a four-yard touchdown to open the scoring. While he didn’t get to find the end zone again, Bayless put his speed on display with 180 receiving yards on nine catches. It marked his seventh game with 130-plus receiving yards this season and further proved he is talented enough to play on Sundays.

Washington wanted to get a glimpse at its future on Saturday by making Newton a focal point of its offense. He led the Huskies in carries against Boise State and stomped all over the Broncos defense.

Newton didn’t just dominate on the ground. The Huskies ran a trick play and gave him a chance to throw the football, which resulted in an 11-yard touchdown pass. Of course, most of his damage came on the ground with 69 rushing yards and a touchdown. We’re excited to see what Newton can do in 2020 as a workhorse in Washington’s offense.